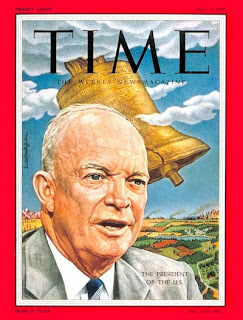 "His conservatism was fixed and rigid and any evil defacing the nation had to be extracted bit by bit with a tweezer because the surgeon's knife was an instrument too radical to touch this best of all societies."

So wrote Dr. Martin Luther King years after he met President Dwight D. Eisenhower at the White House to discuss civil rights. King was impressed with the president's "sincerity" on the issue. Though the two men agreed on the goal of racial justice, they differed on approach. Perceptively, King placed a label on Ike that few others had before or since. He believed him to be a conservative.

How did Eisenhower, as a soldier and president, handle racial injustice? As the author of the book "Ike's Final Battle: The Road to Little Rock and the Challenge of Equality," released last month, I was surprised to find that Eisenhower's approach to civil rights throughout his career was coherent, cogent and above all, conservative. It tells the story of how the greatest American hero of his time came to terms with the greatest American dilemma of all time.

Previous books on this the most controversial aspect of Ike's storied career have given him little credit and less understanding. Some books portray him as indifferent to civil rights. He wasn't. Others paint him as almost opposing it. He didn't. Rather, the question for him was how best to reach a more just society. "Ike's Final Battle" shows Eisenhower was largely in harmony with the goals of civil rights movement, if not in melody. Theirs was a liberal movement that sought dramatic change. His was a conservative administration that desired incremental progress.

Even today in some quarters, to call Ike a conservative is blasphemy. Indeed, much of the conservative establishment of today took root in the 1950s. National Review was first published in 1955, for example. And in the first year of Ike's presidency, scholar Russell Kirk exhumed Edmund Burke from his grave and brought him to life in a book called The Conservative Mind. In it, Kirk told American conservatives that they should look to the eighteenth-century British statesman for inspiration.

One of the interesting attributes of Burke's legacy is that he espoused a set of broad principles, but refrained from endorsing a specific ideology. That is, Burke didn't have a conservative philosophy so much as he had a conservative mindset. He saw conservatism not as an agenda of issues but as an approach with which to deal with issues as they developed.

Eisenhower, though he might not have been a political conservative, was certainly a personal one. Like Burke, he believed in organic evolution, the idea that change happens over time, step by step. When Burke spoke of the "wisdom of the ancients," he cautioned that decades and centuries of tradition and reverence for institutions should not be disregarded overnight. Like a coral reef, society is built up over centuries, eventually becoming a wave-resistant sanctuary for life. 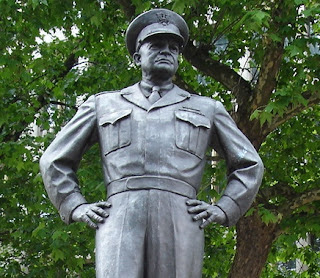 Dwight D. Eisenhower's statue outside the US Embassy in London

And perhaps nowhere was Ike's conservatism more evident than on civil rights. His journey on the issue began during World War II at the Battle of the Bulge. Here, needing more troops to send to the front, Ike went against War Department policy and encouraged African-American soldiers in the Supply Service to train for combat and be treated "without regard to color or race...." Many responded. And served well. Ike took note and later told an African-American aide during the 1952 presidential campaign that he was inspired by the heroic service of black troops in World War II. "They fought nobly for their country," he said. "And I will never forget."

But if World War II changed Ike, it also changed America. African-Americans who went to the front of the line in battle weren't eager to go to the back of the bus in Birmingham. The civil rights movement gained new momentum. By the time Eisenhower ran for president, a civil rights revolution was building as new claims were made for equal rights in government, in business and in public schools.

Eisenhower's conservatism can perhaps best be seen in the actions he took over the course of his presidency in handling civil rights. Even though he preferred the velvet cords of persuasion to the iron bonds of law, as president he did pursue gradual change.

First, Ike desegregated the District of Columbia. Having full constitutional power over the nation's capitol, he effectively ended decades of segregation. He even pressured Hollywood executives to open up their DC theaters on a color-blind basis. They did.

Second, Ike desegregated the military. In response to Truman's executive order in 1948, many in the military had dragged their heels. Eisenhower used his military aura to help finish the job of creating a desegregated military. Interestingly, Truman's executive order in many ways can be traced back to Ike's decision at the Battle of the Bulge, which proved that African-Americans were just as brave as any soldiers.

Third, Ike weighed in on Brown v. the Board of Education. He had mixed feelings about the case, worrying about the size and scope of it. But he agreed to let Attorney General Herbert Brownell file a brief on behalf of the NAACP that separate schools were unequal. When the ruling came down, he vowed to enforce it.

Fourth, Ike pushed for and signed the first major civil rights legislation since Reconstruction. His only disappointment with the new law was that Senate Majority Leader Lyndon Johnson successfully attached a "jury-trial" amendment so that whites accused of racial crimes would have the home field advantage offered by a white jury.

Fifth, he appointed fair-minded judges who would hand the civil rights movement its biggest victories for years to come. "The best civil rights judges in the South," remembered Andrew Young, "were the Eisenhower appointees..."

Each of these steps was important. But none settled the issue. Ike had tried to move carefully, taking action where he thought he had the power and where he thought he could make a difference. He was trying to create an evolution. But he soon realized a revolution was coming.

Eisenhower had long feared that inflamed passions on civil rights might one day erupt into a "conflict of the police powers of the states and of the nation" and he feared that when that day came it might "set back the cause of progress in race relations..."

That day came in September 1957 at Little Rock.

When Arkansas Gov. Orval Faubus obstructed a court-approved desegregation plan by posting Arkansas National Guard troops in front of Central High School, the nation faced its gravest constitutional crisis since the Civil War. All of Ike's fears about "another civil war" appeared to be coming to fruition. 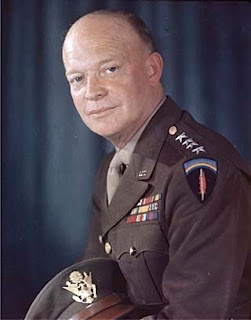 Yet he never wavered. He allowed Faubus time and space to reconsider. He met with him in person. He urged him to do the right thing. And at last, when no other option was available, he sent elements of the 101st Airborne to Little Rock. The nine African-American children integrated the school. The crisis ended. The civil rights movement had scored one of its greatest victories ever.

Eisenhower has seldom received credit for this victory because he seldom sought credit for it. He saw the use of troops at Little Rock as a failure, not a success. He was saddened that it had come to that. He later said that sending troops into an American city was as difficult a decision as ordering the D-Day invasion.

In later years, Ike continued to think about civil rights. In a private conversation with a friend he said that Barry Goldwater's vote against the 1964 Civil Rights Act made him "sick." And during the racial riots of the 1960s, he placed the blame on the "glib assurances" of the Great Society that told people their "difficulties will disappear by magic...."

In the end, Dr. King had been right all along. Ike wanted to do the right thing; he just wanted to do it in his own conservative way.

Kasey S. Pipes wrote speeches for President Bush and Governor Schwarzenegger. “Ike’s Final Battle” is his first book. For more information, go to www.kaseyspipes.com
Posted by jtf at 7:10 AM