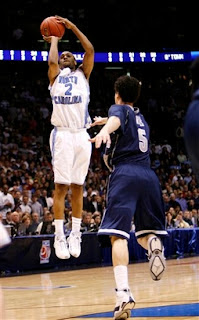 It had to be agony for North Carolina coach Roy Williams to sit there at the Meadowlands yesterday, watching the wheels come off his ACC championship team.

But there wasn't much he could do about it during the Tar Heels' 96-84 overtime loss to Georgetown in the East Regional final.

Carolina, a 51% shooting team coming into this weekend, built a 50-44 lead at halftime and led by as many as 10 after Marcus Ginyard made a pair of free throws with 7:19 left in regulation. But then the Heels fell apart, missing 22 of 23 shots before guard Ty Lawson made a three-pointer with just eight seconds to play in OT.

Talk about your massive collapses.

And you thought Tennessee's second-half meltdown against Ohio State Thursday was bad.

This one had Georgetown-Kentucky in the 1984 national semifinals written all over it. In that game, the Wildcats shot 3-for-33 in the second half of a 53-40 loss to the Hoyas, leading Kentucky coach Joe B Hall to send a manager out to the Seattle Kingdome afterward to see if the rims really were 10 feet off the ground.

This type of meltdown rarely happens to a well-coached, storied program like Carolina. Aside from last year, when the Heels did let a double-digit second-half lead dissolve against George Mason in the 65-60 second-round loss, I can only think of one and that was back in 1980 when Carolina had the lead against Texas A&M in the second overtime of a second-round game, but fell apart in an 78-61 loss.

"The highs in coaching are never as high as the lows are low," an emotional Williams said. "It was a great feeling in 2005 when we won the national championship, but you know, some of my critics, my detractors like to say they love to see Roy cry. But no sucker has never said that to my face."

North Carolina's 6-9 sophomore All American forward Tyler Hansbrough was red-faced when he met the media, looking as if he had been crying in the locker room. He scored 26 points and got to the line 14 times. But he shot just 6-for-15 and was never a factor down the stretch against the physical Georgetown defense. He missed a jumper with 45 seconds left that set the stage for the Hoyas' single-minded point guard Jonathan Wallace to hit a game-tying three pointer with 31 ticks left that ultimately forced the overtime.

"I mean, shots just weren't falling," Hansbrough said. "You have times where, you know, you get a little bump and it throws you off." 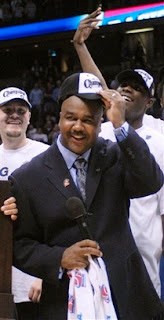 This was the 25th anniversary of the fabled Carolina-Georgetown national championship game. The Heels could have used Michael Jordan. Guards Wayne Ellington, Lawson and Reyshawn Terry combined to shoot just 8-for-33. Carolina shot just 9-for-27 in the second half and 1-for-13 in overtime. And when the panic started to set in during the OT, the Heels shot just 1-for-8 from the three-point line. Williams could recall the beginning of the end.

Carolina had a 75-65 lead and the ball when sophomore Danny Green put up a wide-open three-pointer with 6:27 to play and 24 seconds left on the shot clock.

"I wanted to get the ball inside and possibly get fouled because they had some foul trouble," Williams said. "I thought at the end of the game we may be able to play against some of their subs as opposed to Roy Hibbert or some of their starters. We miss it and they go down and get a dunk. We come down and miss, they make a three at the other end and all of a sudden, it's a five-point game."

The Hoyas shot 58% for the game, dissecting Carolina's man-to-man defense with a Princeton spread offense.

"We didn't do a good job putting pressure on the passer. When Herb Sendek, who I really respect, was at N.C. State, back-door cuts never bothered us," said Williams. "They'd get one of two but we'd get some turnovers. Today, we didn't get turnovers and their back-door cuts led to dunks."

While Williams was upset with the loss, he wasn't completely shocked.

"The night the brackets came out, I said on a show I thought Georgetown was the best No. 2 seed and might have been playing as well as anyone in the country," he said.

Williams was right, and now he can watch Georgetown up close in Atlanta, but he'll be in the stands, not playing for a national title.

dweiss@nydailynews.com
Posted by jtf at 7:42 AM