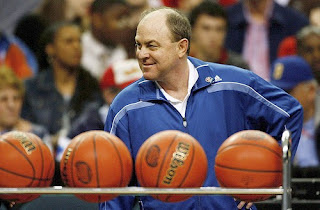 Head coach Ben Howland of the UCLA Bruins is shown during practice for the NCAA Men's Final Four at the Georgia Dome (3/30/07).

UCLA has spent a year learning how to win tonight


ATLANTA — Listening to UCLA's Minutiae Man regale the national media with a dozen different statistics in one nine-sentence stretch Friday — I am not making this up — I felt a pang of guilt.

Upon hearing Ben Howland spill his numerical guts about Florida shooting this or Florida rebounding that, I feel a need to confess some details of my own.

Before six of the Bruins' last seven NCAA tournament victories, I picked them to lose.

Mad, but true. Check my brackets. Hack into my e-mail. Ask my friends. It's all there.

Last spring, I was certain the Bruins would lose to Gonzaga, then Memphis, then LSU. This spring, I adamantly believed they would lose to Indiana, then Pittsburgh, then Kansas.

The Bruins had enough toughness to bully through the Pac-10, but I never figured they could keep slogging their way through the swifter game in the rest of the country.

There was a reason nobody played the way they did. Nobody thought a team could win that way. The Bruins were like a suede coat. They were good until the rain came.

Or so I thought, until I have watched them survive storm after storm, from sleeting Adam Morrisons to pounding Glenn Davises to pelting Brandon Rushes to their second consecutive Final Four.

Where I will not make a seventh mistake.

Bandwagon riders are stomping on my fingers as I dangle above the street, but I will say it again.

The Bruins couldn't do it in a seven-game series, but they can do it once, and that once is now, when the scowls and sighs have aligned to create the most memorable UCLA victory since that 1995 team stared down 40 minutes of you-know-what.

There are three reasons, one for every giant wrinkle in Arron Afflalo's glare. 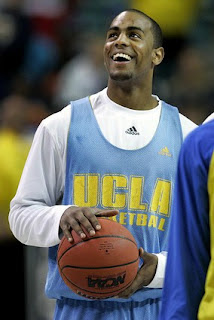 There is little chance that the most-prepared coach in college basketball will lose a game that he's been pondering for a week.

This is zero chance he will lose a game that he's been pondering for a year.

"We were outplayed in every facet of the game," he said. "We were horrible at both ends of the floor."

Usually Howland watches losses immediately after the game, often more than once. He didn't watch the Florida tape until four months later.

"It was very painful," he said.

One can surmise that this week, that pain has been transferred to his players, especially those who were on that Indianapolis floor. They have watched the film and been poked in the pride.

"We know we blew it," said Darren Collison. "We didn't play with enough intensity."

Anyone think Howland will let that happen again? Anyone think he won't figure out a way to frustrate Florida's big men and wear down their shooters?

Anybody remember when he's done this before?

Last season, in November, the Bruins were overrun by Memphis, 88-80. Four months later, when they met again in the tournament's regional finals, Howland outcoached John Caliperi so badly the beaten Tigers scored only 45 points.

Even without the distraction of the Kentucky rumors, Billy Donovan would suffer the same fate here.

No team in the Internet era has had to endure national scrutiny like this year's Gators. No team here is more exhausted.

Visiting with them in Gainesville this week, I could see it in their eyes. That same look was visible Friday as they were surrounded by dozens of reporters and cameras in the bowels of the Georgia Dome.

"Last year we shocked a lot of people, but now it's all different," said the Gators' Chris Richard, shaking his head. "Everybody thinks we're the perfect team, the best team of all time, and if we lose, they're all going to think we're just terrible."

"Every day this year, 15 or 20 people have come up to me and wanted to talk about the team," said the Gators' Joakim Noah. "It's draining."

There is a reason it has been 15 years since a team repeated as NCAA basketball champions. After about 30 minutes of Florida being pushed into submission tonight, that reason will reveal itself again.

Collison and Josh Shipp were not a factor last season, but could be the difference here.

Collison is better for this offense than Jordan Farmar, who was awful in the championship game. He was eight for 21. He threw up too many wild shots. He failed to make many smart passes. Players grumbled about him in the locker room.

Collison will be a better leader against the Gators. He will not get beat by the quick Gators guards. He will be unselfish in directing the offense.

Then there is Shipp, the double-digit scorer who watched last year's game from the bench because of a hip injury. He will double Cedric Bozeman's two baskets, and keep the Gators' defense from keying on Afflalo.

"This is one of the great teams in college basketball, in history," said Howland of the Gators.

Tonight, for one night only, the Bruins will be better.

Bill Plaschke can be reached at bill.plaschke@latimes.com. To read previous columns by Plaschke, go to latimes.com/plaschke.
Posted by jtf at 11:04 AM