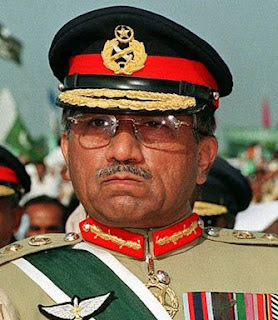 The other day Pakistan's Gen. Pervez Musharraf took time off from his hectic schedule of trying to survive assassination attempts to pay tribute to someone who, alas, had been less successful at dodging the attentions of his killers: A week ago, during the cricket World Cup, Bob Woolmer, the coach of the Pakistani national cricket team, was murdered in the Pegasus Hotel in Kingston, Jamaica, in what Mark Shields (not the American TV pundit but the veteran Scotland Yard man leading the police investigation) called “extraordinary and evil circumstances."

"This nation will always remember him for the joys he brought into the lives of millions of Pakistanis," said Musharraf, awarding Bob Woolmer posthumously the Sitarae-Imtiaz, or Star of Excellence. "The cricketing world and Pakistan, in particular, will find it extremely difficult to fill the void Bob's death has left behind."

Unless you're one of America's many cricket fans — pause for sound of crickets chirping — you probably didn't even notice this news. When Anna Nicole meets an untimely end in the Caribbean, there's 24/7 coverage. But in Pakistan, the West Indies, Britain and many other places, Woolmer's death is Anna Nicole multiplied a gazillionfold. I was talking to a prominent London journalist in Chicago the other day when his cell phone rang and he was told to hop on a plane to Kingston and get cracking on the murder.

"Russian Mafia," he said, already halfway down the corridor.

"Russian Mafia?" I echoed in disbelief. "That's not cricket."

But apparently it is. Whether or not any actual Russians are involved, rumors of a "match-fixing mafia" are running rampant around Jamaica. Just before the coach's murder, the Pakistani cricket team had lost to Ireland, which is a bit like the New York Yankees losing to my gran'ma. Lord Condon, the head of the International Cricket Council's Anti-Corruption Unit, is said to be en route to the island.

Anyway, I thought of this strange death as I followed the rest of the week's news from Pakistan. Musharraf has had a good innings but stands at an ever lonelier wicket: He suspended the chief justice the other day; the biggest parliamentary faction, the Muslim League, has turned against him; so have the country's three warring intelligence agencies; and in the badlands up by the Afghan border more and more villages are being annexed by the Taliban, which the general doesn't mind terribly much but his friends in the White House do. In the Washington Post, Ahmed Rashid called for the general's retirement and "free and fair elections," which sounds very nice but would deliver Islam's only fully functioning nuclear state into the same kind of weak and corrupt administration as Musharraf's predecessor and be shortly followed by the inevitable coup, or worse.

If you had to draw one of those organizational charts of the world's problems, Pakistan would be at the center of them. We speak of the northwestern tribal lands as some of the most remote places on Earth. But, in fact, when they wanted to, the Saudis had no problem getting to them, spreading a ton of walkingaround money, and utterly transforming those villages: In Waziristan, you'll find goatherds with GPS systems and a quarter-million dollars in U.S. currency, which is a lot for a goatherd. From the North-West Frontier Province, the Saudi money and Wahhabist ideology seeped through the country, into the mosques of the cities, radicalizing a generation of young Muslim men. From there it moved on to new outposts of the jihad, to Indonesia, Thailand and beyond. The flight routes from Pakistan to the United Kingdom are now the most important ideological conduit for radical Islam. The July 7 London bombers were British subjects of Pakistani origin. Last week, two more were arrested in connection with the Tube bombings at Manchester Airport as they prepared to board a plane to Karachi.

Meanwhile, flying back from Karachi and Islamabad to Heathrow and Manchester are cousins — lots and lots of them. Roger Ballard, in a very detailed study of Punjabi marriage, writes that "brothers and sisters now expect to be given right of first refusal in offers of marriage for each others' children." In his research of the Mirpur district in Pakistan, he estimates that at least half and maybe up to two-thirds of those living in Britain of Mirpuri descent marry first cousins. This is a critical tool of reverse-assimilation: Instead of being diluted over the generations, tribal identity is reinforced; in effect, Pakistani tribal lands are now being established in parts of northern England — and, like Musharraf, the authorities have mostly concluded that these communities are so impenetrable and insular that it's best to keep at a safe distance.

Which brings us back to the cricket World Cup, and a freakish murder after a bizarre Ireland victory and stories about a "match-fixing mafia." The civilized world sometimes forgets how thin the veneer of that civilization is: Many venerable, respectable institutions can be hollowed out from within by predators and opportunists. Outwardly, nothing much has changed. But underneath all kinds of other forces are at play, and, by the time you notice, it requires enormous will to reverse it. Pakistan was never the most placid and stable polity but it's now riddled from top to toe, its worst pathologies amplified by Arab cash and ideology and the nuclear equivalent of a desktop-publishing boom: Mysterious Sino-Pakistani technological transfers have recently been noticed through Kashmir.

Pakistan exports the fruit of its radical madrassahs in ideology and personnel to Britain and beyond. The mother country, like an elderly spinster, doesn't like to think ill of those nice young men in Manchester and Leeds and Oldham. We're all inclined to be deferential to multiculturalism these days: When imams get turfed off a flight in Minneapolis, it's easiest to tut-tut and demand sensitivity training for the cabin crew, so that next time round, no matter what they do, we'll know to look the other way. The Quebec government, which mandates verifiable picture ID in order to vote, has just waived the requirement for Muslims: Show up at the polls in a burqa or niqab and no one will be so insensitive as to insist on checking whether your face matches that on the driver's license. And so it goes: creeping sharia, day by day, further insulating communities already prone to self-segregation, but nothing too big or startling to ruffle the scene. In Britain, the authorities can tell you (roughly) the number of jihadist cells and the support they command in the Muslim community. But doing anything about it is far more problematic. Wouldn't be cricket, old boy.
Posted by jtf at 6:56 PM