Bob Ryan: Not leaving for NBA had its pros 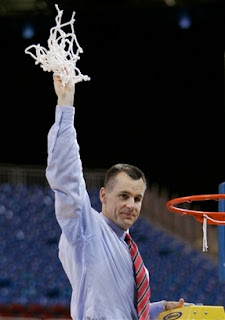 Florida coach Billy Donovan after the Gators won the Midwest Regional to advance to the 2007 Final Four.

ATLANTA -- Even Billy Donovan admits he would never have believed there would be a scenario like this, in which an entire draft-worthy starting frontcourt from a newly crowned NCAA championship team would put the NBA on hold in favor of pursuing another title.

"I think in today's day and age, it's very, very rare," says the University of Florida coach. "I'm hopeful maybe some of our guys have maybe carved out a path. I'm not sitting here saying that guys leaving early to go to the NBA is the wrong decision. I think when guys leave early is the wrong decision is when they don't want to, but feel pressured or forced into it. I think the one thing I respect and admire about all these kids' families is that they were supportive of, 'What makes you happy? What do you really want to do? What's going to make you happy?' They chose to come back."

Yes, Joakim Noah, Al Horford, and Corey Brewer are back, the Florida Gators are back, and through the luck of the draw, they will be playing UCLA tonight, the same school -- neither can be said to be the same "team" -- they defeated a year ago to win the championship. That's not the ideal circumstance, but the way the Gators see it, what's one more obstacle in a season that has offered them life experiences they will refer to until their dying days?

There may not be any Shakespearian scholars among them, but were someone to say to any member of this team, "Uneasy lies the head that wears a crown," he would nod in affirmation.

The player who would most readily testify to the truth of that line is Noah, the 6-foot-11-inch junior who, by virtue of his extraordinary skills, vibrant personality, signature ponytail, and celebrated upbringing (the offspring of a tennis star-turned-singer and a former Miss Sweden), has become college basketball's link to pop culture. 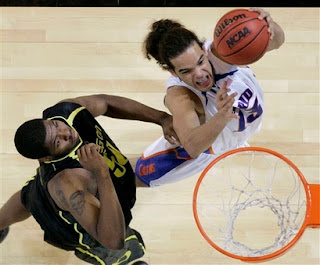 Florida's Joakim Noah (13) goes up for a shot against Oregon's Joevan Catron (50) during the first half of the NCAA Midwest Regional final basketball game in St. Louis, Sunday, March 25, 2007

Noah has evolved from a somewhat frustrated freshman grubbing for every available playing minute to the MVP of a Final Four to a designated villain/piñata in two years, and it has had an enormous effect on him. Worldlier than the average college student to begin with, he has now been stripped of every last shred of naiveté concerning what it means to be a scrutinized college athlete in contemporary society.

"Last year we played for a lot of people," Noah explains. "But now we realize that at the end of the day, who cares? We were put under a microscope this year and people were so quick to jump on us. So what's important to me now is my family and the guys in this locker room. That's the people I'm playing for. No one else."

Florida is attempting to become the first back-to-back champion since Duke in 1991-92. Arkansas gave it a shot, winning in '95 and losing to UCLA a year later, and I'm sure the Razorbacks have stories to tell about their quest, especially since coach Nolan Richardson was always a lightning rod sort. But we have come a long way in terms of media scrutiny and fan sensitivity in the ensuing decade, and it's safe to say that no school has ever been treated so, well, professionally in its post-championship season. Noah is the primary reason for this, but for some reason people seem to have decided they've had enough of Florida already. The Gators are one of the few teams, college or pro, that really does have a right to invoke the usually bogus "us against the world" theme.

Once the three stars made their decisions to stay, the trick was to not get ahead of the story. The games were no problem. The problem was everything else. 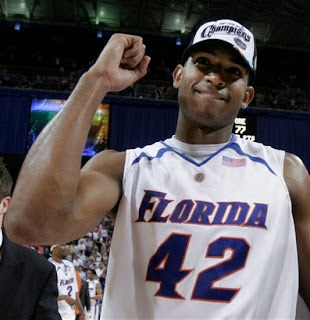 There was no fast-forwarding to the Final Four. The Gators have played 38 games, and they have not all gone according to plan. After clinching the Southeastern Conference's East Division with four games to go, they hit a speed bump, losing three of four games. Serial killers have gotten better press.

Smirks Noah, "It was like, 'The Gators have lost three in a row! They're gonna be out of the tournament in the first round, baby!' You know what I'm saying?"

Then they rolled through the SEC tournament, only to encounter some NCAA Tournament resistance from the likes of Jackson State, Purdue, Butler, and Oregon. When you're the defending champs, and when you've got this whole Band of Brothers thing going, just winning isn't enough. To keep everyone happy, you need style points, too.

All the while, Donovan is trying to negotiate around and through all the obstacles, knowing that being defending champions doesn't even necessarily mean you were the best team to begin with.

"I think if you would start the tournament all over again, there would maybe be four different teams sitting up here right now," he maintains. "Let's be honest, we all have had close calls to get to this point. We've all had close calls, a bounce of the ball, a missed free throw, a last-second shot. We've all been vulnerable . . . It's the greatest college, and maybe sports, event in this country because of the uncertainty of what's going to happen. In order to find out who the best team is, you almost have to have a series . . . I don't know who the best team is in college basketball. But that's what makes this tournament great -- the uncertainty."

There was nothing certain about any of it. These three kids decided to return. OK, fine. Everyone had to stay healthy. Egos had to stay in check. They had to maintain the common purpose. They had to get past the days when they'd start daydreaming about the money they didn't have. They had to deal with the bewildering days when the entire basketball world seemed united in its desire to see them fail. Do they know how hard it is to win again? Duh.

"If we didn't look at it," says Noah, "you guys told us about it. It's not like we didn't know about it. Nobody told me it would be easy, but if it was easy, everybody would do it, right?"

Repeat. That's the idea, of course, but it's one word that has never been spoken inside the locker room.

"People want to talk about the repeating part," Donovan says, "but you have to get to Monday first. So I don't really think about repeating as much as trying to play the best game we can against UCLA. This game's not about repeating. It's about playing UCLA for the opportunity to win it all."

Noah, Horford, and Brewer could be in, let's say, Sacramento, Charlotte, and Philadelphia, in varying stages of personal NBA happiness. All things considered, they'd rather be in Atlanta, pursuing their little dream and brushing up on their Shakespeare.

Bob Ryan is a Globe columnist. His e-mail address is ryan@globe.com.
Posted by jtf at 10:26 AM