Washington Capitals press their luck with yet another Game 7

The Washington Capitals have faced the frightening prospect of failure -- and then failed spectacularly-- as often, as infamously, and usually as comically as any pro team in sports in the last 30 years.

But they have never had quite the chance to fail as badly as they do on Wednesday night at Verizon Center. Before you can avoid such a fate in sports, you have to acknowledge it and face it. You can't leave it standing behind you, tapping you on the shoulder.

In the last 25 years, the Capitals have blown a two-game lead in a playoff series six times. All six times, they finished in a total tailspin, losing either their last three or four straight games.

But if the Caps squander a two-game lead for a seventh time, this time against Montreal, they will break new ground. No top-seeded team has ever blown a 3-1 lead to an eighth-seeded team. 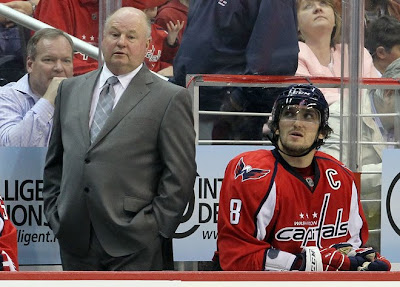 WASHINGTON DC, DC - APRIL 23: Alex Ovechkin(notes) #8 and head coach Bruce Boudreau of the Washington Capitals look on against the Montreal Canadiens in Game Five of the Eastern Conference Quarterfinals during the 2010 NHL Stanley Cup Playoffs at the Verizon Center on April 23, 2010 in Washington, DC. (Photo by Jim McIsaac/Getty Images)
Normally, this column stays 100 miles away from pep talks. But, frankly, I'm sick and damn tired of the same Caps choke story. It's beyond old, beyond sad, beyond undeserved. Eventually, no response -- commiseration, castigation or comedy -- applies.

One year ended on a triple-overtime power play after a too-many-men-on-the-ice penalty. Another year died after 73 saves in quadruple overtime by Kelly Hrudey. A Caps team with the second-best record in the NHL blew a 3-1 lead over the Pens. In the first period of yet another Game 7, the Caps allowed a 130-foot, unmolested, end-to-end, one-man scoring rush just 97 seconds into play (two Caps defensemen knocked each other down). Then, later in the same period, the Caps shot the puck into their own net.

Repeat as needed: "This is not the same team."

Nevertheless, a loss Wednesday would have seismic implications. When my son was a child, he got mad and said, "I'm going to get the old people out and get some new people in." If the Caps lose this Game 7, that's what owner Ted Leonsis may say about both his beloved Caps and his newly acquired Wizards.

Becoming a championship franchise is a process. And it's seldom a straight line. However, there has to be one constant in an elite organization. Everybody has to love a challenge and rise to it the instant it arrives -- even if it's an unwanted, despised challenge.

Great athletes want tough conditions and harsh tests, even ones that seem unfair or threaten them with embarrassment. No, nobody says, "Let's lose a few games to the Canadiens, push ourselves to the cliff edge, then see if we can make our team tougher by winning a Game 7 that could mortify us all."
But once a Game 7 rushes up in your face, you'd better find a way to welcome it. Or it will eat you, like it has many Caps teams in the past.

Before the last round of a major golf championship, Jack Nicklaus would sometimes act like he didn't know the Sunday weather forecast. When he was told: "Lousy. Windy, cold, maybe rain," he'd smile and say: "Good. That'll thin out the field quick."

At Caps practice on Tuesday, Coach Bruce Boudreau seemed to be thinking along similar lines. "This is our first chance to face adversity all year," he said, not having sought it out, but seeing the opportunity in it, nonetheless.
"We started the season good, kept playing good, then we got better and won the Presidents' Cup. This is the first time we've had to persevere, the first time we've had a chance to say, 'Yes, we pushed through the wall.'

"I'm a big fan of March Madness. How many times do you see a top-seeded team struggle in the first or second round, escape by a point or two, then they start winning its games by 15 points, 15 points, 15 points, just when it should be getting tougher to win?"

The crisis, the escape, the toughening, the creation of team mythology, the bonding, has a value. That is, if you get through it.

After playing Montreal 10 times this year, with a mere 6-4 record and only a four-goal scoring advantage, the Caps surely realize that, while they are a huge favorite on paper, they are only a small favorite on ice. Montreal has a hex on the Caps' power play -- a horrific 1 for 30 in this series by a team that converted 25.1 percent in the season. That's like squandering a goal a game so far.

Montreal also likes the way its horde of left-handed defensemen hound the right-handed Alex Ovechkin. Under pressure, Alexander Semin, not the brightest light on the tree, and Mike Green, seem to stop themselves.

Then there's Jaroslav Halak, driven to the bench by Caps goals early in the series. Now, he's back. And temporarily perfect.

The Caps can view Wednesday as merely a miserably unpleasant chance to avoid a huge upset. Boudreau has said, perhaps too many times, that the Caps wish there wasn't any Game 7.

Each Cap is trying to get his mind around how to do it.

"If we'd played badly in Game 6, then you'd have things that might need to be changed," Jason Chimera said. "But we played really well. The puck just didn't go in. We need to do the same things. I like our chances."

This is the Caps' fourth Game 7 since 2008. Because the team has so much talent at Hershey, the future has unusual roster flexibility. Put another way, even though this Game 7 may feel traumatic, it is also a chance for the Caps to get more vital information on who will be part of the eventual team that makes an assault on the Stanley Cup, now or someday.

Can Semin, Green or Tomas Fleischmann raise their games? Are the current goalies, and the defense in front of them, good enough for playoff hockey? Is Boudreau, the popular "Slap Shot" coach, big-time enough to finish the Stanley Cup quest?

There is no fairer or more illuminating test than a Game 7, especially on home ice where there's no outside excuse. For the Caps, an easier test would have been nicer. But not necessarily better.

Champs are always forged in fire. Let's see who can stand the heat.
Posted by jtf at 7:59 AM