'South Park' and the Informal Fatwa

The veiled threats against the Comedy Central show's creators should be taken very seriously. 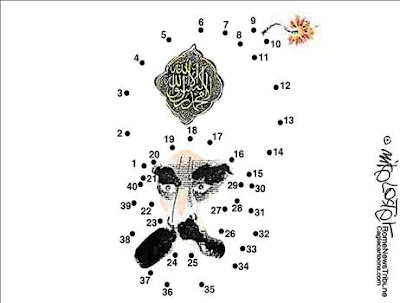 'South Park" is hilarious, right? Not any more.

Last week, Zachary Adam Chesser—a 20-year-old Muslim convert who now goes by the name Abu Talhah Al-Amrikee—posted a warning on the Web site RevolutionMuslim.com following the 200th episode of the show on Comedy Central. The episode, which trotted out many celebrities the show has previously satirized, also "featured" the Prophet Muhammad: He was heard once from within a U-Haul truck and a second time from inside a bear costume.

For this apparent blasphemy, Mr. Amrikee warned that co-creators Trey Parker and Matt Stone "will probably end up" like Theo van Gogh. Van Gogh, readers will remember, was the Dutch filmmaker who was brutally murdered in 2004 on the streets of Amsterdam. He was killed for producing "Submission," a film that criticized the subordinate role of women in Islam, with me.

There has been some debate about whether Mr. Stone and Mr. Parker should view the Web posting as a direct threat. Here's Mr. Amrikee's perspective: "It's not a threat, but it really is a likely outcome," he told Foxnews.com. "They're going to be basically on a list in the back of the minds of a large number of Muslims. It's just the reality." He's also published the home and office addresses of Messrs. Stone and Parker, as well as images of Van Gogh's body.

According to First Amendment experts, technically speaking this posting does not constitute a threat. And general opinion seems to be that even if this posting was intended as a threat, Mr. Amrikee and his ilk are merely fringe extremists who are disgruntled with U.S. foreign policy; their "outrage" merits little attention.

This raises the question: How much harm can an Islamist fringe group do in a free society? The answer is a lot.

Mohammed Bouyeri, a Dutch-Moroccan Muslim first thought to have been a minor character in radical circles, killed Theo van Gogh. Only during the investigation did it emerge that he was the ringleader of the Hofstad Group, a terrorist organization that was being monitored by the Dutch Secret Service.

The story was very similar in the case of the Danish cartoons of the Prophet Muhammad. The cartoons, drawn by Kurt Westergaard, were published in September 2005 to little notice but exploded five months later into an international drama complete with riots and flag-burnings. The man behind this campaign of outrage was an Egyptian-born radical imam named Ahmed Abu-Laban.

Prior to this conflagration, Mr. Abu-Laban was seen as a marginal figure. Yet his campaign ended up costing Denmark businesses an estimated $170 million in the spring of 2006. And this doesn't include the cost of rebuilding destroyed property and protecting the cartoonists.

So how worried should the creators of "South Park" be about the "marginal figures" who now threaten them? Very. In essence, Mr. Amrikee's posting is an informal fatwa. Here's how it works:

There is a basic principle in Islamic scripture—unknown to most not-so-observant Muslims and most non-Muslims—called "commanding right and forbidding wrong." It obligates Muslim males to police behavior seen to be wrong and personally deal out the appropriate punishment as stated in scripture. In its mildest form, devout people give friendly advice to abstain from wrongdoing. Less mild is the practice whereby Afghan men feel empowered to beat women who are not veiled.

By publicizing the supposed sins of Messrs. Stone and Parker, Mr. Amrikee undoubtedly believes he is fulfilling his duty to command right and forbid wrong. His message is not just an opinion. It will appeal to like-minded individuals who, even though they are a minority, are a large and random enough group to carry out the divine punishment. The best illustration of this was demonstrated by the Somali man who broke into Mr. Westergaard's home in January carrying an axe and a knife.

Any Muslim, male or female, who knows about the "offense" may decide to perform the duty of killing those who insult the prophet. So what can be done to help Mr. Parker and Mr. Stone?

The first step is for them to consult with experts on how to stay safe. Even though living with protection, as I do now in Washington, D.C., curtails some of your freedom, it is better than risking the worst.

Much depends on how far the U.S. government is prepared to contribute to their protection. According to the Danish government, protecting Mr. Westergaard costs the taxpayers $3.9 million, excluding technical operating equipment. That's a tall order at a time of intense fiscal pressure.

One way of reducing the cost is to organize a solidarity campaign. The entertainment business, especially Hollywood, is one of the wealthiest and most powerful industries in the world. Following the example of Jon Stewart, who used the first segment of his April 22 show to defend "South Park," producers, actors, writers, musicians and other entertainers could lead such an effort.

Another idea is to do stories of Muhammad where his image is shown as much as possible. These stories do not have to be negative or insulting, they just need to spread the risk. The aim is to confront hypersensitive Muslims with more targets than they can possibly contend with.

Another important advantage of such a campaign is to accustom Muslims to the kind of treatment that the followers of other religions have long been used to. After the "South Park" episode in question there was no threatening response from Buddhists, Christians and Jews—to say nothing of Tom Cruise and Barbra Streisand fans—all of whom had far more reason to be offended than Muslims.

Islamists seek to replace the rule of law with that of commanding right and forbidding wrong. With over a billion and a half people calling Muhammad their moral guide, it is imperative that we examine the consequences of his guidance, starting with the notion that those who depict his image or criticize his teachings should be punished.

In "South Park," this tyrannical rule is cleverly needled when Tom Cruise asks the question: How come Muhammad is the only celebrity protected from ridicule? Now we know why.

Ms. Ali, a former member of the Dutch parliament, is the author of "Nomad: From Islam to America—A Personal Journey through the Clash of Civilizations," which will be published next month by Free Press.
Posted by jtf at 6:52 AM

Email ThisBlogThis!Share to TwitterShare to FacebookShare to Pinterest
Labels: Islam and The West, Television