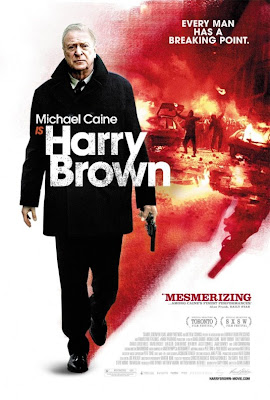 FOR all the hoo-hah over its visuals, there's not one moment in this week's biggest new movie - 2012 - that will leave you mouthing: "How the hell did they do that?

'Cos the answer's always obvious: They chucked £100 million at the special effects company.

But watch the opening to this bleakly brilliant British street drama starring Michael Caine and I defy you not to be blown away.

Grainy mobile phone footage shows a mob of thugs smoking crack and twirling pistols. Seconds later, two hoodies - maybe from the same gang, maybe not - rev a scooter past a young mum and threaten her with a handgun, for a laugh.

They shoot to miss her. But they don't miss.

So the pair panic, speed off and career headlong into a ten-ton lorry.

It also sets the scene perfectly for a punishingly raw crime thriller that doesn't just hold a mirror up to Broken Britain but shoves a lit newspaper through its letterbox and spray-paints "A*SE" on its front door.

Harry Brown (Caine, currently on a three-film winning streak) is a widower caught on a London sink estate that's sinking ever further as he watches.

Local hoodies (chillingly played by Ben Drew, AKA rapper Plan B, and Jack O'Connell from Eden Lake) stab his elderly best friend but the police can't pin the crime on them.

So ex-Royal Marine Harry takes matters into his own hands, and finds himself pitted not only against the scumbags but the two honest cops (Emily Mortimer and Charlie Creed-Miles) doing things by the book.

On paper it sounds like Death Wish: OAP edition, which is clearly a risky prospect. But the film works so well because Caine DOESN'T play the pensioner as some daft vigilante granddad. Harry's just an ordinary old man pushed too far, and you'll be on board with him the whole way.

This is a blazingly confident movie from first-time director Daniel Barber, which is packed with strong performances. And the lawless mood is evoked so well, at times it feels like a Western. It's a disturbing, downbeat but vital British film. Pick of the week by far. 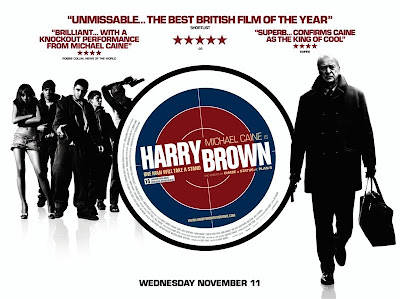 With his wife having recently passed away and his best friend bullied daily by the drug-peddling gangs on his estate, aged ex-Royal Marine Harry Brown (Caine) decides to come out of retirement to clean up the neighbourhood…

At a recent screening of Harry Brown, no less than Michael Caine’s 110th film, Empire witnessed one of his friends come up to him at the end and say, “Wow, Michael. That doesn’t pull any punches, does it?” Caine smiled back. “You bet it doesn’t. But I’ll be in trouble now,” he said, gesturing towards his wife, Shakira. “I told the missus it was a bit like Mary Poppins…”

And, let’s be clear, one thing Harry Brown is not, is anything like Mary Poppins.

Most obviously, it’s the UK’s answer to Gran Torino, with its disgruntled OAP putting the smackdown on the smackheads polluting the turf he’s called home for years. It also borders, alarmingly at points, on a fascist’s fantasy, Caine’s Harry shooting, barb-wiring and torturing his hoodie prey without much in the way of remorse and with much in the way of graphic close-up.

In lesser hands, frankly, it could have played like a tooled-up episode of Jeremy Kyle. But Daniel Barber’s economic direction — in, astonishingly, his first feature — gives his revenge flick a distinct identity of its own. From a truly scary, immediate and immersive pre-credits sequence, througha series of unbearably tense scenes (the standout being Caine’s visit to a drug dealer’s den) and to a wonderfully Western climax, Barber takes his time, giving Harry room to breathe. We’re there when his wife dies. We’re there when his friend is brutalised by the gangs on his estate. And, as a result, we’re there with him when he exacts his savage payback.

It’s unsettling, it’s not for the faint of heart and — to repeat — it’s no Mary Poppins. But it is a powerful and accessible movie that’s brave enough to ask uneasy questions amid its explosive set-pieces and witty one-liners. Not to mention one that reconfirms Caine as the unparalleled king of cool. His transformation from chess-playing old codger to gun-toting Dirty Harry is a masterclass in slow-build.

Essential stuff, even by the big man’s considerable standards.