It is not politically correct, but it has to be said. The impetus to furious objections to the new Arizona law that makes it a state crime to be in the United States illegally is primarily an effort by the organized Latino community to expand its political base and thus power. In this intense effort the Hispanic leaders have enlisted the support of elements in the Democrat party that enjoy an expanded and dependable voting bloc, and those in the Republican Party who seek to maintain an ever ready pool of cheap and/or seasonal labor. 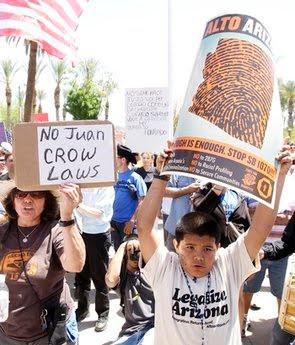 Thousands of protesters, carrying various signs, attend a rally at the Arizona Capitol voicing their displeasure on Sunday, April, 25, 2010, over the Friday bill signing of SB1070 by the Arizona governor, in Phoenix. The sweeping measure makes it a crime under state law to be in the country illegally, and would require local law enforcement to question people about their immigration status if there is reason to suspect they are in the country illegally. (AP Photo/Ross D. Franklin)

What is behind the claims of expected civil rights abuses based on the need for people to carry some form of documentation that shows they are legally in the U.S.? The answer is to be found in a desire to protect those who are in the country illegally from being expelled.

The position of the majority of the Latino community in Arizona, and perhaps throughout the United States, is that no laws should be passed or enforced that restrict illegal immigrants once they have successfully crossed the border escaping capture. In brief, the belief of the Latino community is that while undocumented border crossing may be against the law, the results of doing so are not to be challenged.

While such a concept is convenient for those people who have entered the U.S. without going through the correct legal procedures, the underlying logic is that immigration by people of Latin heritage (primarily from Mexico and Central America) who enter the U.S. through its border with Mexico deserve treatment different from that accorded other immigrants.

The various Latino organizations along with their left-liberal supporters argue vehemently against this interpretation. They point to support from other immigrant groups including, but not limited to, Korean and Chinese associations. The next step in their argument is to note that "this country was built by immigrants" -- as if any immigrant-related action precludes illegality.

As all of us have discovered in the past 230-plus years, the status of being an "immigrant" does not endow one with any special privilege. It's what you accomplish after arriving here legally and becoming a citizen that creates an American's unique status.

By attempting to broaden the issue of illegal immigrant invasion of Arizona into a national civil rights matter, the Latino groups and their backers have obfuscated facts. State, county, and local law enforcement in Arizona under SB 1070 clearly must follow federal guidelines. The language in the law is quite clear and it follows exactly the same federal wording. And 70% of the residents of Arizona polled by Rasmussen agree with the bill and its intent.

Perhaps the most purposeful mischaracterization of the bill has been made by some of Arizona's Latino politicians. One of the most opinionated and articulate is Congressman Raul Grijalva (D), who has repeatedly called for a boycott of his own state. Aside from the basic disloyalty to his home, Grijalva, as other extreme leftists have done, attempts to shift the issue to how hard it will be to pursue the aim of the bill -- as if that were not a problem with much of law enforcement on all levels. Every device in fallacious argumentation has been used.

How can it be "racial profiling" when the fact of speaking Spanish or having a "Spanish" accent is not an element of "race"? Obviously the powerful Latino group, La Raza, believes otherwise, as does the other major Hispanic association Chicanos por La Causa. If such incorrect use of the term were legitimate, every person whose family came to the United States from a non-English speaking country would have to be considered a member of a separate race. 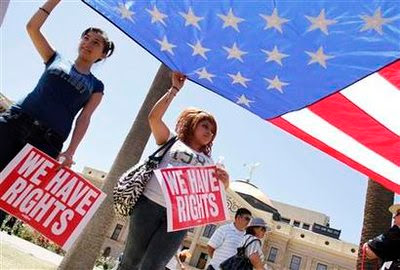 People hold the U.S. flag as they protest against Senate Bill 1070 outside the Arizona State Capitol in Phoenix, Arizona April 25, 2010.
REUTERS/Joshua Lott

So why go to all this trouble of establishing a separate identity when supposedly the aim of all immigrants is to assimilate into the American political, economic, and social body? The answer is unfortunate. The leaders of most of these Latino groups want to maintain a separate identity while gaining all the advantages of the physical existence of the United States. Ordinary Latinos, whether or not born in the United States, have been exploited by their own political leaders to believe that separating themselves and increasing their numbers by any method available is the only way to be respected and influential on the American scene.

Frankly, the disproportionate number of Latinos serving in the elite services of the military is adequate evidence of their community's commitment to the preservation of the structure and tradition of the United States. Why is this not adequate recognition for the self-aggrandizing political echelon of the Hispanic establishment and their Anglo-opportunist fellow travelers? It's certainly recognized by the Marine Corps and U.S. Army Airborne.

The answer lies in the greed and ambition of people, elected officials and political operatives who seek to manipulate the Latino presence in the United States for their own purposes, political and economic. It is outrageous that the highest levels of the American government have been willing to participate in this exploitation. They know full well that the police of Arizona are professional enough to discern possible criminals from others. They don't need facial hair clues or skin color to guide them. On the other hand, it is not sure that Rahm Emanuel wouldn't be picked up and have his documents checked out on the streets of Apache Junction. There's something very shifty about him….

George H. Wittman writes a weekly column on international affairs for The American Spectator online. He resides in Arizona.
Posted by jtf at 6:18 AM