Islamist groups such as Muslim Revolution are not demanding equality for Islam; they are demanding superior status. 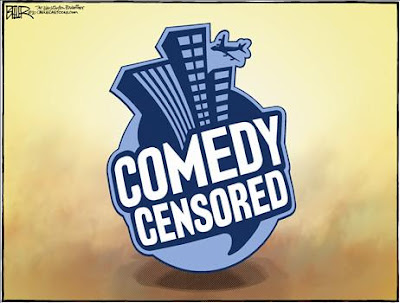 What do Comedy Central and Yale University Press have in common? In the Islamist war against free speech, both have been on the front lines. And both have surrendered.

Last week, Comedy Central censored any depiction or even mention of the Prophet Mohammed from an episode of the adult cartoon series South Park. This capitulation followed a “warning” from a group calling itself “Revolution Muslim” that those responsible would “probably wind up like Theo van Gogh” — the Dutch filmmaker murdered by a Dutch-Moroccan Muslim for producing Submission, a documentary about the plight of women in Islamic societies.

Also censored by Comedy Central was a speech about intimidation and fear. Though the speech made no mention of Mohammed, the executives at Comedy Central evidently decided it might offend or anger someone — perhaps Islamists who make it their business to intimidate and frighten.
Kind of comedic when you think about it, no?

Similarly, Yale University Press last year published The Cartoons that Shook the World, a book on the controversy and violence — as many as 200 people were killed — incited by Islamists in response to the appearance of twelve satirical caricatures of Mohammed in Danish newspapers in 2005.
The publishers decided not to include the caricatures in the book about the caricatures. John Donatich, director of Yale University Press, candidly told the New York Times that he didn’t want to end up with “blood on my hands.”

As you might expect, when it comes to caving in to Islamist pressure, Europeans have been the trend-setters. All the way back in 1989, Iranian revolutionary leader Ayatollah Ruhollah Khomeini issued a fatwa calling for the murder — by any Muslim willing and able — of British author Salman Rushdie, whose novel The Satanic Verses Khomeini declared offensive to Islam. The European response to this assault — not just on a European citizen but also on European values — was feckless.

Four years ago, the Deutsche Oper cancelled a production of Mozart’s Idomeneo, an opera in which the severed heads of Jesus, Buddha, and Mohammed appear onstage. The “moderate” head of Germany’s Islamic Council, Ali Kizilkaya, commended the opera house for respecting Muslim sensitivities. That’s kind of funny, too, when you think about it.

Sigmund Freud once said he regarded the burning of his books as a mark of progress. “In the Middle Ages,” he explained, “they would have burned me.” Wouldn’t he be surprised to learn that, a century later, we are apparently heading back to the Middle Ages — thanks to regimes, movements, and ideologies the names of which many of our cultural and political leaders dare not even pronounce.

Sen. Joseph Lieberman, chairman of the Senate Homeland Security Committee, this month wrote a letter to John Brennan, who carries the hefty title of assistant to the president for homeland security and counterterrorism and deputy national security adviser. Lieberman expressed his concern over the deletion of “Islamic extremism” — or any term that might suggest a link between terrorism and either Islam or Islamism — from the U.S. National Security Strategy.

This omission — the product, no doubt, less of fear than of “political correctness” and bureaucrats playing at public relations — is, Lieberman noted, only “the most recent in a series of administration statements that refuse to acknowledge that we are engaged in a war with an enemy that has killed thousands of Americans based not on a vague policy of extremism but on a specific and violent ideology of Islamist extremism.” Among those administration statements: the report on the Fort Hood massacre, which was carried out by an assailant shouting “Allahu Akhbar” — “Allah is greatest” — as he shot dead as many American soldiers as he could manage.

The Committee on the Present Danger, an organization that in the 20th century was focused on the Communist threat and that now focuses on the Islamist threat, this week also sent a letter to Brennan — as well as to President Obama and Secretary of State Hillary Clinton — supporting Lieberman’s concerns. Among the signatories: former secretary of state George Shultz, former CIA director Jim Woolsey, former national security adviser Robert McFarlane, former attorney general Ed Meese, and former presidential adviser Max Kampelman.

A reporter working on the Comedy Central story asked me whether those who object to books, cartoons, operas, films, and other materials that Muslims might find offensive were not being hypocritical, since they do not apply the same standard when it comes to Christians and Jews. His question reveals a common misunderstanding. Islamist groups such as Muslim Revolution are not demanding equality for Islam. They are demanding superior status. They are supremacists: They believe it has been divinely ordained that Islam must dominate; that Sharia, Islamic law, must prevail; that “unbelievers” must submit.

In this way, militant Islamists are akin to Nazis, who believed that Aryans were the master race; and to Communists, whose goal was to create a “dictatorship of the proletariat” that would lay down the law to the bourgeoisie and other classes.

“Freedom is never more than one generation away from extinction,” Ronald Reagan warned us. He added: “It must be fought for.” Right now, however, the trend among Western elites is to wave the white flag. How encouraging that must be for Muslim Revolution and similar groups now proliferating around the world.

— Clifford D. May, a former New York Times foreign correspondent, is president of the Foundation for Defense of Democracies, a policy institute focusing on terrorism and Islamism.
Posted by jtf at 6:57 AM

Email ThisBlogThis!Share to TwitterShare to FacebookShare to Pinterest
Labels: Islam and The West, Television