All the Picassos in the Cupboard 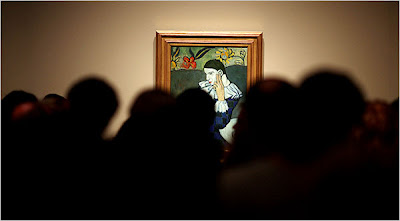 Picasso in the Metropolitan Museum of Art, a retrospective of the collection; above, a view of “Seated Harlequin,” 1901.

When in doubt, haul the Picassos out. There have already been several such haulings-out this year, and now comes the biggest of all, “Picasso in the Metropolitan Museum of Art,” a display of nearly every scrap in the Met’s scrappy Picasso collection: 34 paintings, 58 drawings, a dozen sculptures and ceramics, along with 200 of the museum’s 400 prints.

In terms of logistics, homegrown is great. Low overhead. No frets about loans held up by volcanoes. Even fairly ambitious shows can be short-order jobs. This one was just a year in the planning, which is nothing in museum time.

Also, the instant availability of all the art allows for concentrated study.
And the show’s curators — Gary Tinterow and Susan Alyson Stein of the Met’s department of 19th-century, Modern and contemporary art — took full advantage of this with a sweeping conservation campaign. Virtually every Picasso piece was given the equivalent of a complete physical, and the exams revealed fascinating things, detailed in the catalog: preparatory drawing, underpainting, compositional rethinking and material recycling invisible to the unassisted eye.

The problem is the collection itself, which, despite some knockout items, is stodgy and almost bizarrely lopsided.

The Met has a history of dragging its feet with new art. It began acquiring Picasso only late in the game, and even then it didn’t come up with the idea on its own. Out of the blue in 1947 Gertrude Stein got the ball rolling when she gave the museum its first Picasso, the portrait he had painted of her in Paris between 1905 and 1906.

What arrived thereafter, again largely as gifts, tended to be conservative. While the Museum of Modern Art was wolfing down audacious helpings of Cubism, the Met was content with a tasting menu of early Blue Period, Rose Period and neo-Classical fare. But at least it got good stuff in these areas. So the show, arranged chronologically, begins with some flair. It also introduces the basic metabolism of the career that would follow: tame high polish, followed by brain-rattling innovation, followed by a retreat to safety before the next revolution.

Picasso was well aware of his immense talent. He knew that he was equipped to be, and at some level longed to be, Ingres all over again; his hand and his eye were that fine, his love of the past that strong. But if there really is some stray molecule in the brain that produces a chronic rebel, he had it. So he spent a lifetime deliberately not being Ingres, or Cézanne, or Praxiteles, all the while casting a loving eye in their direction.

In 1900, at the age of 19 in Barcelona, he’s already a restless wizard of forms and lines, evident in a set of tiny ink portraits he did of artist friends. Most of the likenesses verge on caricature, though one sitter has a dark, brooding masher’s allure: it’s a self-portrait. Picasso, even in youth, wasn’t the cool dreamboat type. He was a jumpy 5-foot-4 blast furnace. Even during downtime the pilot light was on high. 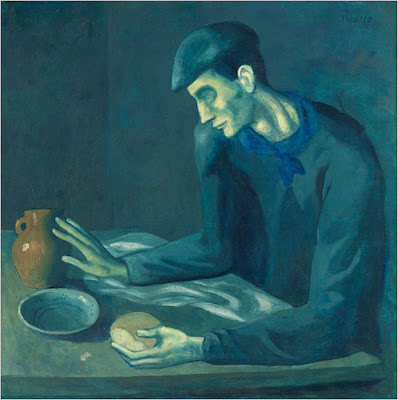 Still, it’s a product of what is now an exceptionally popular phase in his work, the Blue Period, which lasted from 1901 to 1904, when his own just-scraping-by existence made him responsive to the plight of the poor. Beggars, laborers and prostitutes, famished and bent over as if under crushing weight, were his subjects. His version of social realism was, of course, Romantic and unspecific. With their subaqueous palette, these paintings seem to luxuriate in a kind of cosmic depression, the way we do in adolescence, when we’re living on caffeine, dreams and nerves. “Seated Harlequin,” painted when Picasso was 20, catches the mood. The androgynous, pensive theatrical figure sitting alone in a cafe, could be the artist himself.

Although Picasso began to replace blue with pink and beggars with clowns, the air of melancholy persisted until the summer of 1906 when, with his lover Fernande Olivier, he left Paris for a stay in the Spanish Pyrenees. His color changed again, to earthen browns and grays. His figures, now often nude, bulked up but with the kind of carved, compartmentalized naturalism that would lead to the Stein portrait and beyond it to Cubism.

Cubism was his mold-shattering rebel moment, and a collaborative one, shared with Georges Braque. The leap it represented, however assiduously trained for, is given to few artists to make. It basically redefined Western concepts of space, time, art, beauty, high, low, good, bad — the works. Too bad that it’s exactly at this point that the Met’s Picasso collection starts to break down, and the show to lose steam.

This is not to say there aren’t wonderful things; there are, from the 1910 charcoal drawing called “Standing Female Nude,” with its near-abstract stack of brackets and shelves, to the radically anti-virtuosic newsprint collages of 1912. Yet this intense, difficult moment of invention, when Picasso was fighting every grandstanding, people-pleasing instinct in him, is disconcertingly underrepresented at the Met and outweighed by the backward-looking neo-Classical work that he churned out after World War I.

A familiar example, “Woman in White,” got some press in the 1990s after scholars proposed that its sitter was not, as assumed, Picasso’s Russian wife, Olga Khokhlova, but the free-spirited American Sara Murphy. Intrigue! Hidden passions! An affair? The story of Picasso’s art and the explanation for what makes it tick is often told in terms of the women in his life. And although this simplistic approach has long since grown tired, it’s the one we are invited to pursue at the Met.

So we move from a 1927 portrait of the jealous, jilted Olga as an enormous screaming mouth, to another, from 1932, of the teenage Marie-Thérèse Walter as a slumberous, pinheaded blimp, to a third, dated 1939, of Dora Maar — “the only one of Picasso’s lovers who was his match in mind and temperament,” according to the catalog — as a grinning, pulled-apart doll. By contrast, Stein remains, in her portrait, recognizably, monumentally herself, possibly because Picasso — who had a hard time with the picture — couldn’t turn her into an extension of his own ego.

To his credit he was fully conscious of that ego and able to call the shots on it in a myriad of direct or oblique self-portraits, as heartthrob, harlequin, minotaur, big-deal artist, classical god and, in the years before his death in 1973, pint-size musketeer. Most of these characters turn up in the show’s final room, a salon-style hanging of prints as exhausting to take in as it must have been to install.

Massed together, the prints give a fair idea of why this artist is the awesome and exasperating presence he is and why his work can look exhaustibly inventive from one perspective and like occupational therapy from another. From the Met’s prints you can grasp both views, but from its Picasso collection as a whole, so off-kilter and mild, no.

In the long run the museum is doing a smart thing by going public with its deficiencies. The results make for a disappointing exhibition, but they also serve as an open call to collectors to pony up with gifts, fill in those blanks, be another Gertrude Stein. If the ploy works, maybe the next time the museum hauls out its Picassos, it will have not just a popular hit, which this show is sure to be, but also a great event.

“Picasso in the Metropolitan Museum of Art” remains on view through Aug. 1 at the Met; metmuseum.org.