A law Arizona can live with

By George F. Will
The Washington Post
Wednesday, April 28, 2010
http://www.washingtonpost.com/ 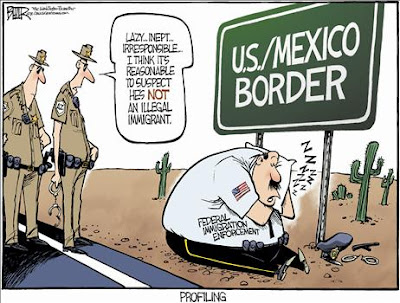 "Misguided and irresponsible" is how Arizona's new law pertaining to illegal immigration is characterized by House Speaker Nancy Pelosi. She represents San Francisco, which calls itself a "sanctuary city," an exercise in exhibitionism that means it will be essentially uncooperative regarding enforcement of immigration laws. Yet as many states go to court to challenge the constitutionality of the federal mandate to buy health insurance, scandalized liberals invoke 19th-century specters of "nullification" and "interposition," anarchy and disunion. Strange.

It is passing strange for federal officials, including the president, to accuse Arizona of irresponsibility while the federal government is refusing to fulfill its responsibility to control the nation's borders. Such control is an essential attribute of national sovereignty. America is the only developed nation that has a 2,000-mile border with a developing nation, and the government's refusal to control that border is why there are an estimated 460,000 illegal immigrants in Arizona and why the nation, sensibly insisting on first things first, resists "comprehensive" immigration reform.

Arizona's law makes what is already a federal offense -- being in the country illegally -- a state offense. Some critics seem not to understand Arizona's right to assert concurrent jurisdiction. The Mexican American Legal Defense and Education Fund attacks Gov. Jan Brewer's character and motives, saying she "caved to the radical fringe." This poses a semantic puzzle: Can the large majority of Arizonans who support the law be a "fringe" of their state?

Popularity makes no law invulnerable to invalidation. Americans accept judicial supervision of their democracy -- judicial review of popular but possibly unconstitutional statutes -- because they know that if the Constitution is truly to constitute the nation, it must trump some majority preferences. The Constitution, the Supreme Court has said, puts certain things "beyond the reach of majorities."

But Arizona's statute is not presumptively unconstitutional merely because it says that police officers are required to try to make "a reasonable attempt" to determine the status of a person "where reasonable suspicion exists" that the person is here illegally. The fact that the meaning of "reasonable" will not be obvious in many contexts does not make the law obviously too vague to stand. The Bill of Rights -- the Fourth Amendment -- proscribes "unreasonable searches and seizures." What "reasonable" means in practice is still being refined by case law -- as is that amendment's stipulation that no warrants shall be issued "but upon probable cause." There has also been careful case-by-case refinement of the familiar and indispensable concept of "reasonable suspicion."

Brewer says, "We must enforce the law evenly, and without regard to skin color, accent or social status." Because the nation thinks as Brewer does, airport passenger screeners wand Norwegian grandmothers. This is an acceptable, even admirable, homage to the virtue of "evenness" as we seek to deter violence by a few, mostly Middle Eastern, young men.

Some critics say Arizona's law is unconstitutional because the 14th Amendment's guarantee of "equal protection of the laws" prevents the government from taking action on the basis of race. Liberals, however, cannot comfortably make this argument because they support racial set-asides in government contracting, racial preferences in college admissions, racial gerrymandering of legislative districts and other aspects of a racial spoils system. Although liberals are appalled by racial profiling, some seem to think vocational profiling (police officers are insensitive incompetents) is merely intellectual efficiency, as is state profiling (Arizonans are xenophobic).

Probably 30 percent of Arizona's residents are Hispanic. Arizona police officers, like officers everywhere, have enough to do without being required to seek arrests by violating settled law with random stops of people who speak Spanish. In the practice of the complex and demanding craft of policing, good officers -- the vast majority -- routinely make nuanced judgments about when there is probable cause for acting on reasonable suspicions of illegality.

Arizona's law might give the nation information about whether judicious enforcement discourages illegality. If so, it is a worthwhile experiment in federalism.

Non-Hispanic Arizonans of all sorts live congenially with all sorts of persons of Hispanic descent. These include some whose ancestors got to Arizona before statehood -- some even before it was a territory. They were in America before most Americans' ancestors arrived. Arizonans should not be judged disdainfully and from a distance by people whose closest contacts with Hispanics are with fine men and women who trim their lawns and put plates in front of them at restaurants, not with illegal immigrants passing through their back yards at 3 a.m.

georgewill@washpost.com
Posted by jtf at 2:49 PM

Email ThisBlogThis!Share to TwitterShare to FacebookShare to Pinterest
Labels: Border Issues, George Will