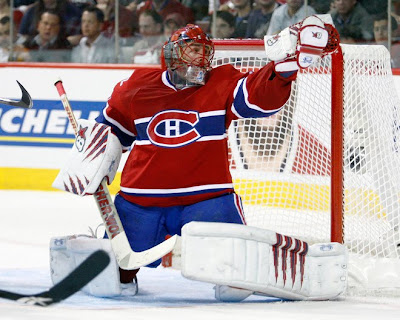 MONTREAL- APRIL 26: Jaroslav Halak(notes) #41 of the Montreal Canadiens makes a glove save on the puck in Game Six of the Eastern Conference Quarterfinals against the Washington Capitals during the 2010 NHL Stanley Cup Playoffs at the Bell Centre on April 26, 2010 in Montreal, Quebec, Canada. The Canadiens defeated the Capitals 4-1 tying the series 3-3. (Photo by Richard Wolowicz/Getty Images)


MONTREAL- So, this building of guttural roars is up two goals to nil early, and it's rocking -- I mean, just b-b-b-booming inside the Bell Centre, louder than fury unleashed in Washington. Louder, according to the arena's decibel meter, than any moment in its 14-year history after the second goal.

The white towels begin pirouetting above the throaty throng, and all of Quebec is relying on one man to again stone the most explosive offense in the NHL and keep the season alive for at least one more game.

Jaroslav Halak glances up at the time, clicks his goalie stick against the metal piping, bends his knees, digs in and does the impossible: He takes away the Capitals' mojo; he seizes every puck, every chance from a disbelieving Alex Ovechkin and his frustrated team, who are used to rolling sevens but not having an elimination game forced upon them by someone else.

It's a frightening window into this suddenly-even Eastern Conference quarterfinal series:

The goaltender of the most proud and decorated pro franchise in Canada, sprawling, diving, doing the splits as if he were doing his compulsories on the balance beam than minding the net. The greatest Canadiens goalies ever, Jacques Plante and Ken Dryden and Patrick Roy, had to see shades of themselves in Halak.

Fifty-three saves, in a game his team was incredibly outgunned by 32 shots.

"I'd say in terms of playoff hockey I've seen -- of course I've only covered the Canadiens for the past 55 years -- that's the best goaltending I've seen next to Patrick Roy against the Rangers in overtime [1986]," said Red Fisher, 82, high above the Bell Centre ice. "Roy stopped 13 shots in overtime that night before the Canadiens had one shot -- and Claude Lemieux scored on it. Other than that, tonight was the greatest."

It's not just the language or the rich food anymore. This man in the net for Montreal who sees everything has made everything feel so strange and foreign.

"Sometimes goalies get into a zone where nothing was going to beat him," said the Caps' coach, Bruce "Wake Me When It's Game 7" Boudreau. "He got into that zone."

Heading into their fourth elimination night at Verizon Center in three years under Boudreau, the Capitals have lost something that was theirs since last fall.

The power. Knowing confidence of a team apparently ready to make the transition from very good to great. It's gone.

Part of the allure of the last three riveting playoff series was how the Caps managed to will their way back into a series, down 3-1 twice and 3-2 against the Penguins before David Steckel deflected in that game-winner that made Pittsburgh go dead quiet. Emerging on home ice with monster momentum after evening the series, now Washington is the team that gave back a three-games-to-one lead in a series the Caps had so many opportunities to put away before things became so critical Monday night in Montreal.

Because of Halak, because they have made the Canadiens pay for their penalties just one measly time out of 30 power-play opportunities -- and certainly because Ovechkin and his teammates have not yet learned to play from a position of strength -- it's time to officially envision the possibility that the current hood ornament for Washington-region pro sports teams could in all likelihood be knocked off by a bunch of less talented, but more committed players and their fearless and fabulous goaltender.

The defining moment came early, after the two-goal lead. The Capitals were on a 5-on-3 power play with more than five minutes left in the first period. For the uninitiated, that means Washington's great hockey players -- top seeded in the Stanley Cup playoffs, losers of just 15 games in regulation all season -- had two extra men on the ice because the Canadiens committed a pair of two-minute penalties in a blink.

Now, it would hold that a team thought to be a superior group of players, believed by everyone who knows this game to be much better at 5-on-5 skating than the Canadiens, would be lethal with Ovechkin, Nicklas Backstrom, Alexander Semin, Mike Green and Brooks Laich against three defenders and Halak.

Statistically speaking, teams at 5-on-3 strength score more than three times as much as teams on the power play on 5-on-4 strength.

That should be an open net for the most talented team in the NHL. Boudreau is even fond of saying, "If you can't convert 5 on 3, you usually don't win." 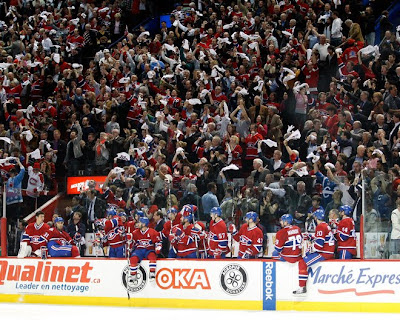 MONTREAL- APRIL 26: Members of the Montreal Canadiens and fans celebrate the third period goal from Tomas Plekanec(notes) #14 in Game Six of the Eastern Conference Quarterfinals against the Washington Capitals during the 2010 NHL Stanley Cup Playoffs at the Bell Centre on April 26, 2010 in Montreal, Quebec, Canada. The Canadiens defeated the Capitals 4-1 tying the series 3-3. (Photo by Richard Wolowicz/Getty Images)
You know what happened. They couldn't find the net because Halak kept finding the puck. He was so good, bringing the building to a crescendo and to its feet after stopping a third-period flurry in front of the net that ended with Ovie just dumbfounded that the mere connection of his stick with the puck inches from the net did not result in a score.

Halak also robbed Joe Corvo on a point-blank rocket with 14 minutes left in the second period, catching a slingshot of hard rubber in the leather of his glove with the left hand. He flicked his glove high in almost a flourish afterward as the towels came out and tumult of tonsils and sound began anew.

This is how good the team with the worst record in the NHL postseason is feeling about itself: The Canadiens' goalie is now Manny Ramírez, showboating on the warning track after robbing someone of a home run.

Meanwhile, Ovechkin was a symbol of the Caps' frustration. When he scooted in unmolested and tried to backhand it softly past Halak on the same power play, the unshaken goalie covered up quickly as Ovie veered out of control behind the net on his knees, essentially a hydroplaning car awaiting its fate with a guardrail.

But it's on all of them. The Caps gave this former beaten-down team the belief it needed in the first 10 minutes of Game 5, and now this meek, mild outfit that was supposed to go home last Friday is on the precipice of the biggest upset in the NHL this season.

Now, impossibly, it could be one and done. And if you could hear this unbelievably charged building at this very moment -- the symphony of sound, some 20,000 screaming raucously as Halak was announced as the game's No. 1 star -- only one emotion could be felt by an authentic fan who followed the Washington Capitals' record-setting, ridiculously good season thus far:

It's time. It's very much time.

George McPhee, resigned to his fate, slowly walked up the stairs toward the elevator at Bell Centre at the end of the game. "We played great," Washington's general manager said. "Their goalie was just greater."