There are many government functions that are unappealing to one extent or another; that is not in itself an argument against them. 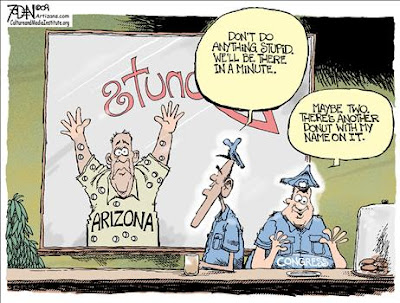 On Monday, Matt Lauer of Today interviewed Joe Arpaio, the Maricopa County, Ariz., sheriff who’s made a national name for himself cracking down on illegal immigration. Lauer noted that Arizona’s new immigration bill has the support of 70 percent of Arizonans. “But get this,” Lauer added, “53 percent of those same people said they worry it could lead to civil-rights violations.”

Lauer and other commentators seem to think that there’s something of a contradiction here. I don’t see it, perhaps because it describes my own position so well. I support the Arizona law, but I’m also worried that it could lead to civil-rights abuses.

It seems that whenever government expands either its powers or its enforcement efforts, you should be worried that it could go too far. But such worries have to be balanced against necessity.

In other words, there are many government functions that are unappealing to one extent or another. That is not in itself an argument against them. The Patriot Act was ugly — and necessary.

Consider California’s decision to “lead by example” on global warming. Environmentalists argued that Washington was negligent in fighting climate change at the federal level. Hence California had no choice but to tackle a national problem at the state level. California implemented standards that are considerably more strict than those required (for now) by Washington.

Arizona’s law is more humble than that. While California pushed a stricter standard than the one Washington was enforcing, Arizona seeks to enforce the federal law that Washington isn’t enforcing.

The constitutional and legal issues make the parallel less than perfect, but the principle remains the same. Indeed, I’d wager that the costs of illegal immigration — economic, social, and environmental — on Arizona dwarf the costs on California from global warming, at least so far.

President Obama seems to get this, sort of: “Indeed, our failure to act responsibly at the federal level will only open the door to irresponsibility by others. And that includes, for example, the recent efforts in Arizona.”

This is awfully tendentious, since he takes it as a given that Arizona’s effort to take some responsibility for a problem is best understood as “irresponsible” — as if continuing to do nothing at the local level while too little is done at the federal level would be more responsible. Of course, “irresponsible” is lavish praise compared with the charges of “apartheid” and “Nazi” coming from some opponents of the law, including Los Angeles cardinal Roger Mahony.

Regardless, Obama is right insofar as Arizona’s effort is the inevitable consequence of Washington’s inability to take illegal immigration seriously.

Which is why the Democrats’ sudden decision to push for “comprehensive” immigration reform is so disappointing. If this were a sincere effort at reform, it would be laudable. But it’s almost impossible to find anyone in Washington not paid to spout Democratic talking points who believes this is anything but a naked political ploy. Even such reliably liberal bloggers as Josh Marshall and the Washington Post’s Ezra Klein concede that this is first and foremost a partisan stunt and wedge issue intended to split the GOP and woo Latinos, particularly in Nevada, where Senate Majority Leader Harry Reid needs a game-changer to avoid crushing defeat in November.

Now, I don’t mind wedge issues per se — though liberals have been decrying them for decades. Still, this is beyond the pale. Ginning up a lot of anger on both sides of the issue without any serious hope of success will in all likelihood send the signal that Washington still thinks it’s all a big, unserious game. And that is precisely why we will get more laws like Arizona’s and real immigration reform will become that much harder, if Washington ever tries to pursue it seriously.

— Jonah Goldberg is editor-at-large of National Review Online and a visiting fellow at the American Enterprise Institute. © 2010 Tribune Media Services, Inc.
Posted by jtf at 7:35 AM