Obama sides with the lawless over besieged citizens. 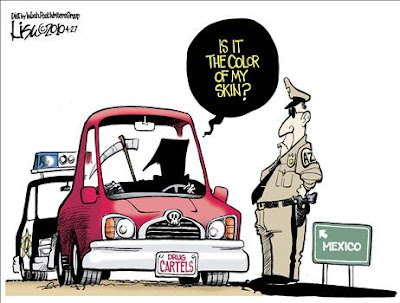 In an inevitable state of ignorance of some of its major provisions, Pres. Barack Obama recently signed a 2,700-page health-care bill. Since then, the president has championed a 1,400-page financial-reform proposal, insisting that it does not provide a blank check for future multibillion-dollar corporate bailouts — but the bill would, in fact, provide a blank-check for future multibillion-dollar corporate bailouts.

The point of these geysers of legislation is to produce tsunamis of regulation. Tens of thousands of pages dense with code will shift control of previously private activity to swelling bureaucracies, unaccountable to any but the most wired insiders. In crony socialism as in crony capitalism, what matters is who you know. When it comes to the law, no one can really know what it is.

In his spare time, on April 8, President Obama signed an arms-reduction treaty with Russia. He urges swift ratification of the accord even though, as former U.S. ambassador to the United Nations John Bolton observes, important provisions are still being negotiated. In the spirit of the times, though, the pact would become the law of the land before those details are finalized, while its authors either don’t know what it says or are lying about it. Administration officials told Arizona Republican Sens. Jon Kyl and John McCain — who will be central to the Senate’s ratification debate — that the treaty referred to missile defense only in the hortatory, non-binding preamble. Yet when the senators looked at the treaty’s binding terms, they found, right there in black and white, a provision (Art. V, para. 3) that would require the United States to refrain from placing “defense interceptors” in existing missile launchers — a severe compromise of American national security.

So when the president hastily pronounced Arizona’s new immigration bill “misguided” and “irresponsible,” Arizona residents — whom the federal government has abandoned to the siege of Mexican warlords, narco-peddlers, and squatters — may be forgiven for snickering. Come to think of it, snickering has become the default reaction to pronouncements on the law by our ex-law-prof-in-chief , particularly those prefaced by his most grating verbal tic, “Let me be clear . . . .”

Why “misguided” and “irresponsible”? The president elaborated that the Arizona law “threaten[s] to undermine basic notions of fairness that we cherish as Americans.” To be sure, Obama has notions of fairness, but they are his own, marinated in doctrinaire leftism. As for the American ideal that he ceaselessly invokes but clearly doesn’t get, our Constitution’s framers thought fundamental fairness would be fatally undermined by two things: the inability of the governed to consent to legal arrangements because it had become impossible to know what the law is, and the failure of central government to tend to its first responsibility: the nation’s security.

The consent of the governed, it is worth remembering, is the only just source of the power that government wields in a free society. One cannot consent to what one cannot know. Thus, there can be no legitimate government if, as Madison put it in Federalist No. 62, “the laws be so voluminous that they cannot be read, or so incoherent that they cannot be understood; if they be repealed or revised before they are promulgated, or undergo such incessant changes, that no man who knows what the law is today, can guess what it will be tomorrow.”

Our elected officials and judicial officers don’t rule us. They are there to govern, to implement our will. When they resort to impenetrable legislative monstrosities to implement their own will without our consent — indeed, over our objection — that is not governing. It is dictating.

Maybe that’s the Obama administration’s problem with Arizona’s new law: It is too short (16 pages), too clear, and too reflective of the popular will. Unlike the social scientists in Nancy Pelosi’s federal laboratory, state lawmakers didn’t need to pass the law first in order to find out what was in it. Essentially, it criminalizes (as a state misdemeanor) something that is already illegal (namely, being present in the United States in violation of federal law), and it directs law-enforcement officers to, yes, enforce the law. Democrats and their media echo-chamber regard this as radical; for most of us, it is what’s known as common sense.

And here’s another commonsense proposition: A government that abdicates our national defense against outside forces is no longer a government worth having.

In adopting the Constitution, in giving their consent to our social contract, the sovereign states agreed to cede some of their authority in exchange for one overriding benefit. It was not to have an overseer to monitor our salt intake, design our light bulbs, prepare for our retirement, manage our medical treatments, or mandate our purchases. It was to provide for our security. It was to repel invasion by aliens who challenged our sovereign authority to set the conditions of their presence on our soil.

For that reason, border security has always been the highest prerogative of sovereignty. Immune from judicial interference, it answers to no warrant requirement. At the border, the federal government does not need probable cause — or any cause at all — to inquire into a person’s citizenship, immigration status, or purpose for attempting to enter our country. Agents can detain immigrants and citizens alike. They can perform bodily searches. They can go through every inch of a would-be entrant’s belongings, read his mail, and scrutinize the contents of his computer. A person subjected to this treatment may find it degrading or unfair, but the courts have nothing to say about it. At stake, after all, is the irreducible core of a sovereign people’s power to protect themselves from intruders.

At the southern border, however, the federal government has forfeited its power. As a result, Arizonans are imperiled by Mexico’s brutally violent warring factions. They are crushed economically as the magnet effect of our unsustainable welfare state falls disproportionately on their schools, hospitals, jails, and pocketbooks, to the tune of nearly $2 billion per year.

Arizona is a sovereign state. Its citizens have a natural right to defend themselves, particularly when the federal government surrenders. The state’s new law does precisely that, in a measured way that comes nowhere close to invoking the necessary, draconian powers Leviathan has but refuses to use.

Demagogues are smearing Arizona’s immigration law as “racial profiling” because it endorses police inquiries into the validity of a person’s presence in the United States. The claim could not be more specious. The law does not give police any new basis to stop and detain someone. Police may not inquire into immigration status unless they have a “lawful” basis for stopping the person in the first place. And even then, the police officer must have “reasonable suspicion” before attempting to determine whether the person is lawfully present. And that suspicion must be generated by something beyond race and ethnicity — as Byron York notes, the law expressly says these may not be the sole factors.

The law is clearly constitutional. Yet the Obama administration, having buried unconsenting Americans under avalanches of debt and inscrutable, unconstitutional mega-statutes, is mulling a court challenge, casting its lot with lawless aliens against besieged Arizonans.

A government destructive of our citizens’ basic rights to know, to determine, and to have the protection of the law cannot endure. This one will not. The only question is how much more damage we will allow it to do.
Posted by jtf at 7:06 AM