Oceans: Dive into a masterpiece

By Liam Lacey
From Thursday's Globe and Mail
Published on Wednesday, Apr. 21, 2010
http://www.theglobeandmail.com/news/arts/movies/ 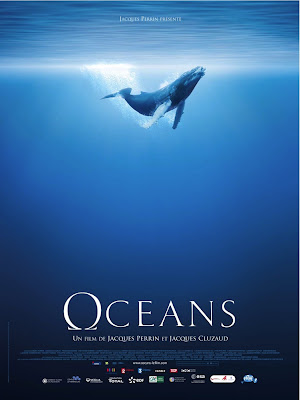 Two armies of spider crabs face off on the ocean floor and then suddenly fall on one another, twisting pincers and legs in an undulating battle. Dozens of newly hatched sea turtles scamper for their lives to the ocean as birds dive-bomb and pick them off. A pair of polka-dotted garden eels stand upright to perform a swaying samba dance.

There are two recurrent reactions in watching the new documentary, Oceans: First, how on earth did they get that shot? Second, who knew we were sharing the planet with so many beautiful and bizarre creatures?

The answer to the first question is time, technology and patience. French team of Jacques Perrin and Jacques Cluzaud (the team behind the 2001 film, Winged Migration) spent seven years, four of them in gathering footage on more than 70 expeditions. They used cameras that allowed them to move intimately among the fish and animals in the ocean, sometimes taking months to capture a brief segment.

The movie opens with children scrambling across sand dunes, and one boy stopping to look at the ocean: “What is the ocean?” asks narrator Pierce Brosnan. The answer, he says, is that you have to immerse yourself in the ocean to understand it.

The film’s organization is dictated by emotional rhythms more than any pedagogical plan. We hop about from clownfish to sea lions, penguins and sharks, otters and an assortment of wonderful oddities: blanket octopus that appear to be trailing long silk scarves, or lionfish, spiked and striped like gaudy carnival dancers.

There are life-and-death dramas, moments of playfulness and tenderness, which create an ever-increasing sense of wonder. There is one scene of vast choreography – as dolphin herd sardines into a bait ball like a spinning top, while birds plunge down like spears through the water, picking off the surface fish. And then whales arrive to crash the party – shot from above, below and at the surface of the water, accompanied by an appropriately symphonic score from French composer Bruno Coulais.

The final third of the film focuses on the interconnectedness between humans and nature, in some respects a challenge here, given that these fish exist in a realm few human beings ever visit. One solution is to leave the planet entirely, in a satellite shot that shows the pollution oozing from the world’s rivers into the oceans. Another is to show a diver, swimming easily beside a nonchalant shark. The environmental message is deliberately low-key – a brief illustration of the massive collateral damage of trawling nets; a telling image of a seal swimming past a shopping cart on the ocean bottom – with the reasonable assumption that a few well-chosen images are going to mean more to the film’s young audience than a litany of dire facts.

Occasionally, Oceans indulges in hokiness in its efforts to make the message of environmental care seem both personally important and adventurous. One shot, no doubt created in post-production, defines the spirit of the film; it’s an image of a rocket blasting to space, but reflected in the eye of a marine iguana whose mournful expression seems to say: “But what about us?”

Disney has promised to make a contribution to The Nature Conservancy to save coral reefs “in honour of every guest who sees Oceans during opening week [tomorrow April 22 through April 28].” Somewhere a garden eel may be doing a dance of gratitude.


Come on in, water's fine in 'Oceans' 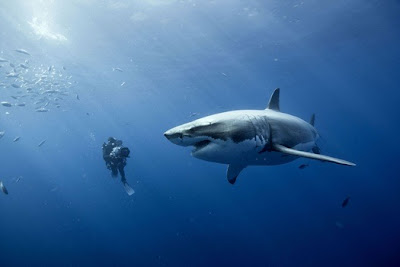 It isn't just the marvelously rich photography that makes "Oceans" such a sensuous, invigorating documentary, one that begs for the invention of new adjectives (splendificent? sumptuoso?). Behold the detail of the sound mix: the drumroll of a vigorous surf. The ruthless clip of a bird of prey as it plucks a newborn sea turtle for a canapé. The scuttle of the wondrous and wee across the ocean floor like a hand rustling in a three-quarters empty bucket of popcorn.

As the film, from Disney, roams all of the world's oceans, underwater life seems like it was imagined by Martin Scorsese. Phalanxes of scarily determined spider crabs strut into battle as psychotically as if re-enacting "Gangs of New York."

A comic-looking fish disguised as a rock turns out to be, in the presence of an unsuspecting passerby, as quick to violence as any squat fiend Joe Pesci ever played.

The movie ends with the usual alarmism about how endangered all of this is by man, and it interrupts its own majesty with some bizarre images, such as a rocket taking off and a Cutty Sark-style sailing ship going by, but these interludes are brief.

What isn't is the blundering narration provided by Pierce Brosnan. "The ocean is an ancient place." Uh-huh. "The ocean is vast." Bland, James bland. Worse are the moments in which our host tries to be James Baudelaire: "All manner of creatures followed -- gazing toward the heavens with prehistoric eyes." "As far as the eye can see -- north and south and east and west -- the ocean smiles at the sky." "On a clear night, as the ocean draws her secrets near, the moonlight dances on the waves."

The movie could -- should -- be a symphony, and it frequently makes excellent use of spare classical music. When Brosnan pipes up, he is as welcome as a car alarm.

The (many) credited authors of this drivel are their own worst anemones. But the photographers effortlessly save them with their nonstop array of dazzling and hypnotic images. If you can't spare a few thousand hours to wander through the vasty deep yourself, "Oceans" will do nicely.
Posted by jtf at 7:21 AM

Email ThisBlogThis!Share to TwitterShare to FacebookShare to Pinterest
Labels: Film Reviews and Features, Flora and Fauna