By George F. Will
The Washington Post
Sunday, April 25, 2010
http://www.washingtonpost.com/ 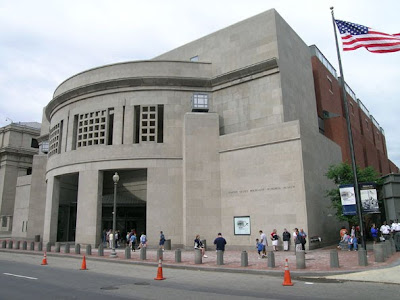 Hearing about a shortage of farm laborers in California, the couple who would become Susumu Ito's parents moved from Hiroshima to become sharecroppers near Stockton. Thus began a saga that recently brought Ito, 91, to the Holocaust Memorial Museum in Washington (pictured at right), where he and 119 former comrades in arms were honored, during the annual Days of Remembrance, as liberators of Nazi concentration camps. While his Japanese American Army unit was succoring survivors of Dachau, near Munich, his parents and two sisters were interned in a camp in Arkansas.

Ito attended one-room schools, graduated from high school at 16 and was accepted at Berkeley. His parents, however, believed that Japanese Americans could not rise in the professions -- even the civil service -- for which the university would prepare him. So he attended community college, studying auto mechanics, although he could not join the mechanics union.

In 1940, Congress passed conscription, and Ito was content to be drafted, thinking the military would be an adventure. He got that right.

Although he was nearsighted and "my feet were flat as boards," he and five other Japanese Americans from around Stockton were inducted in February 1941. Because "Japanese revered their sons being in the military," the Japanese American community threw a farewell banquet for them and gave each $35. After Pearl Harbor, the Army "took our rifles away."

Soon, while he was in training at Fort Sill in Oklahoma, his parents and sisters were interned as security threats, first at a California racetrack where they slept in horse stalls on straw mattresses, later in Arkansas.
Bored by life as a military mechanic and "gung-ho about going to war," he volunteered to be a forward spotter seeking targets for the artillery, a job with a high casualty rate and a short life expectancy. Soon he was in Mississippi, from where he, wearing his country's uniform, could occasionally visit his family behind barbed wire in Arkansas.

In Mississippi, the 442nd Regimental Combat Team, composed of Japanese Americans, trained before being shipped to Europe. It included Daniel Inouye, now 85, who lost an arm while earning a Medal of Honor. He is now in his eighth term as a U.S. senator.

After experiencing combat in Italy, the unit moved up through France and to the famous rescue of the "lost battalion" of the 36th Texas Division, which was cut off by Germans. The 442nd, which suffered 1,000 casualties rescuing 175 surviving Texans, became the most decorated unit for its size in American history.

By March 1945, the 442nd was in southern Germany. Soon it was at Dachau. Eddie Ichiyama of Santa Clara, Calif., who also was here recently, says that "even right now" he can smell the stench. The ovens were still warm. On a nearby railroad flatbed car, what looked to be a supply of cordwood was actually stacked corpses.

Nelson Akagi of Salt Lake City remembers an officer "adopting" Larry Lubetzky, a liberated Lithuanian Jew, as an interpreter. After the war, prisoner No. 82123 went from Germany to Jerusalem to Canada to Mexico City, from where Akagi received a call in 1992. Akagi will search the Holocaust Memorial Museum archives for fresh information about Lubetzky.

After the war, Ito rejoined his loved ones, who had lost everything. He became a professor of cell biology and anatomy at Harvard Medical School. He retired in 1990 but still goes to the lab several days a week.

Such cheerful men, who helped to lop 988 years off the Thousand Year Reich, are serene reproaches to a nation now simmering with grievance groups that nurse their cherished resentments. The culture of complaint gets no nourishment from men like these who served their country so well while it was treating their families so ignobly. Yet it is a high tribute to this country that it is so loved by men such as these.

The Holocaust museum draws almost 2 million visitors a year, four times more than were anticipated when it opened 17 years ago. A museum official says dryly, "Human nature has been an enormous help." She means that atrocious behavior, a constant component of the human story, continually reminds people of the museum's relevance. It is, therefore, grand that the museum also honors those, like Ito, Akagi and Ichiyama, who exemplify the rest, and best, of that story.

georgewill@washpost.com
Posted by jtf at 9:25 AM

Email ThisBlogThis!Share to TwitterShare to FacebookShare to Pinterest
Labels: George Will, U.S. History