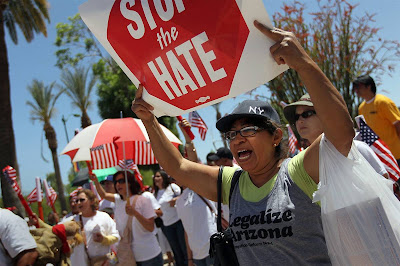 If you’ve been following the news from Arizona in recent days, you’ve probably heard that the state’s Republican governor, Jan Brewer, has just signed into law a “racist” bill that will punish Hispanics, stamp out civil rights, create a police state – and trample on the Constitution for good measure. You also may have heard that the Arizona law will “undermine basic notions of fairness,” at least according to President Obama, who has called the law “misguided” and ordered the Justice Department to find some way to challenge its standing.

Apocalyptic rhetoric notwithstanding, the Arizona law is not at all controversial in substance. All it does is deputize state police to determine whether people are in the country legally and to question them if there is reasonable suspicion that they’re not. Of course, that function should properly be handled by the federal government. But because the government has made so little effort to enforce immigration laws, border states that bear the brunt of illegal immigration – an estimated 460,000 illegal immigrants call Arizona home – have been forced to take action on their own terms.

The concept behind the immigration law is straightforward: If you enforce laws against illegal immigration, you will have less of it. That was also the idea behind Arizona’s Legal Arizona Workers Act, which required the state’s employers to verify the immigration status of new hires using the federal government’s E-Verify program. Businesses eager to avoid the burdens of verification and pro-illegal immigration groups also opposed that measure, filing suit to prevent its passage, but emerging evidence seems to suggest that it had the desired effect: Since being implemented in January 2008, the LAWA has resulted in a substantial decrease of illegal immigration.

The new law seeks to continue that progress. It does so mostly by making state crimes what are already federal crimes. For instance, the Arizona law makes it a crime to be in the country illegally – in other words, it enforces the national law. The Arizona law also requires police to question people about their immigration status if they have reasonable cause to suspect that they’re illegal immigrants. To prevent abuse or racial discrimination, the law also includes provisions banning racial profiling, and the measure itself has nothing to do with race or ethnicity, as the bill’s foes claim. Still, given that the majority of the state’s illegal immigrants are from neighboring Mexico, it is inevitable that the majority of those targeted by the law will be Hispanic. That says more about the demographics of illegal immigration than the allegedly discriminatory agenda of Arizona authorities.

Concerns about the abuse of civil liberties are similarly overblown. The Arizona law will require anyone arrested for a crime to have their immigration status established before their release. In theory, this should already be the law of the land; but so-called “sanctuary city” laws enacted by cities and municipalities across the country have prevented police from enforcing immigration laws. Such laws certainly benefit felons who escape deportation. How they profit the country at large is less apparent. The Arizona law also requires residents to carry ID or immigration registration documents at all times. That too is reasonable. A valid ID is already required to qualify for government and public assistance programs available to citizens and requiring one form of valid ID – whether a drivers license a government-issue ID — hardly marks the onset of Nazi Germany. Indeed, no less than President Obama has previously expressed support for a national ID card.

While some have criticized Arizona for taking the initiative against illegal immigration, it’s hard to find fault with the state’s sense of urgency. Last month’s murder of Arizona cattle rancher Rob Krentz was just example of the crime problem that unchecked illegal immigration has helped create and the problems its poses for American justice. Although Kentz was known for providing illegals with food and water, police found tracks at the murder scene leading to the Mexican border. They made no arrests in the case. In that climate of lawlessness, the state cannot be blamed for passing a law that may help offer a solution. Moreover, with the Obama administration and Congressional Democrats threatening to take up immigration reform – that is, amnesty for the 11-million plus illegal immigrants in this country unmatched by serious enforcement measures going forward – states like Arizona are left with a choice of doing something to combat the problem or leaving it to the federal government to make it worse.

If there is an ugly side revealed by the Arizona law, it is in the extremism of pro-illegal immigration groups. On Monday, opponents of the Arizona law used refried beans to smear swastikas on the Arizona state Capitol. Another champion of illegal immigration, Mexican President Felipe Calderon, made the not-so-veiled threat that Mexican trade and political relations with Arizona would suffer if it cracked down on illegals.

Defying these opponents and braving slander in much of the press coverage, Arizona has taken the lead in enforcing the country’s immigration laws and protecting the rights and interests of its citizens. For the Left, the new law makes Arizona a model of an “American-style police state.” For those serious about border security and law enforcement, it makes it a model worth emulating.
Posted by jtf at 6:37 AM

Arizona – Doing the Work the Feds Refuse to Do

Arizona, by enacting a strict illegal immigration law has decided it wants less murders, kidnappings, assaults, rapes, human smuggling, drop houses, home invasions, drugs, welfare recipients; and fewer illegitimate users of their schools, health care and judicial systems. What’s not to like and cheer on about that?