Wednesday's Meadowlands Show is One for the Ages 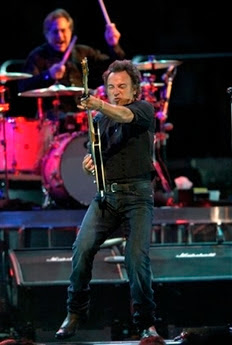 (From Tuesday's show at the CAA)

Wednesday's Meadowlands show is one for the ages

Wednesday night's Bruce Springsteen show at the Continental Airlines Arena is going to be of those shows that you brag to your friends 10 years from now: "I was there that night at the Meadowlands!"

What can I say, it was an awesome show. For me, the best show of the Magic Tour so far, and one that will be remembered as a very special night in the Springsteen lore.

Four songs were tour debuts, and the first time one of the songs from the Magic album was played live.

2. Night- Works well as an opener or in the second slot.

6. Reason to Believe- For the past two shows, Bruce has "sssshhhhed" the crowd before the start of the song. I guess he wants quiet when he starts singing in the bullet mic, but the crowd starts getting into the song and Bruce interrupts that.

9. Living in the Future

10. Cynthia- Tour debut. This was an audible (a song that wasn't on the setlist and Bruce decides to do on the spur of the moment).This song hasn't been played often, but is a great song to play live. The band looked very excited to play it when Bruce told them about it.

12. A Town Called Heartbreak- This is Patti Scialfa's song from her new album. Bruce and Patti share the lead vocals. Backed by the E Street Band.

13. Incident On 57th Street- Always a magical moment when this song is played.

14. Your Own Worst Enemy- First time ever played live. Bruce said: "We're having a debate," while talking to members of the band. And then he said: "Never before attempted!"It sounded pretty good. "It was close!" Bruce said to the crowd as he laughed at the end of the song.

15. You Can Look (But You Better Not Touch)-Tour debut"Come On Steve! Put on that electric guitar" Bruce said before the start. Steve and Bruce had a lot of fun on this song. Steve was hamming it up a bit.

"Thank you for a great night in New Jersey" Bruce yelled out.

21. Girls in Their Summer Clothes

22. Thundercrack- Dedicated to "our good friend Lenny Kaye," the dean of garage rock, Patti Smith Group guitarist, and curator of the original Nuggets. Kaye was at the show.
This gets better and better each time I see it. Bruce and Nils leaned on each others back while playing some of the guitar parts. Really great.

24. Dancing in The Dark- Bruce yelled out to the band to play this. It was either this or Waiting on A Sunny Day on the setlist.

The "we'll be back" part is a good indication that there will be multiple Springsteen shows at Giants Stadium next summer.

Great show, great night. The longest show so far of the tour. The best way to sum it all up may have been a sign that someone was holding up in the front row behind the stage: "Thanks Bruce. It's all been Magic!"