Teaching My Son to Respect The Boss 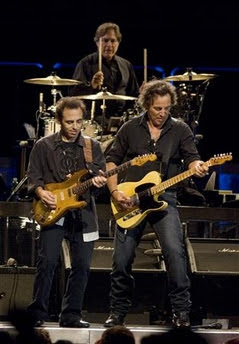 As Springsteen launches a new tour, one devoted fan tries passing on his passion

When you've spent more than 30 years following a musician -- buying every new release, catching every tour, enjoying the music through everything from an eight-track tape player to a video iPod -- it seems only natural to want to share the intensity of the experience with your 14-year-old son.

"Jesse, how would you like to go with me to Hartford to see Bruce Springsteen on the opening night of his latest tour?"

"Who else is playing?"

It is, as it was fully intended to be, a body blow. How could I have failed so miserably as a father?

It's hard to explain to a young teenager -- or, for that matter, many of my middle-age peers -- the continuing, key role Mr. Springsteen has played in the assorted chapters of my life. My memory is filled with joyful scenes: wildly dancing to "Rosalita" with my friends Kip and Rachel in a roach-infested West Philadelphia college apartment. Camping out all night on South Street to score tickets for the "Darkness on the Edge of Town" tour. Seated in the 13th row on the floor of Earl's Court in London in 1999 with my sister and a row of colleagues and friends, two of whom had flown in from the U.S. just to see The Boss reunite with the E Street Band.

Then there was the time in Maryland when my wife's friend who had never seen Mr. Springsteen perform live before turned to me after he and the band had exited the stage following one of "The River" shows. All she could utter was, "Where does he play next?"

It's always possible, of course, that some of the groups Jesse now listens to -- Franz Ferdinand, the White Stripes, Keane, Wolfmother -- will still be touring and releasing great new material decades from now. But in the iTunes Era, when a kid can, with a few mouse clicks, download a hit song for a buck, then go back to instant messaging with friends, it seems that longevity -- let alone loyalty -- isn't the point.

Rock 'n' roll history is also largely irrelevant. According to Jesse, many of his high-school friends have never even heard of Bruce Springsteen, who just turned 58.

Tuesday night's Hartford show, which marked the release of Mr. Springsteen's new CD, "Magic," was not, at least technically speaking, Jesse's first Springsteen concert. In 2002, when we were living in London, I managed to get two tickets at Wembley Arena for one of the early shows on "The Rising" tour. Jesse had just turned 9 and, although I could have traded the extra ticket for the Queen's jewels, I decided it was time to take him to his first rock concert.

The small boy stood with the crowd through the band's powerful opening numbers, "The Rising" and "Lonesome Day," then both new, and a classic, "No Surrender." Then he sat down, curled up in his seat, and fell into a deep sleep. It hadn't helped that the clocks had been set back an hour that fall day or that my wife, out of legitimate concern, had insisted that he wear earplugs. I did manage to awake him briefly during the encore for "Born to Run," when everyone in the arena, now illuminated with floodlights, stood on their seats, pumping their fists into the air. But to a sleepy child, it must have seemed a bizarre dream. He closed his eyes again and didn't open them until morning.

These days, though, at least at home, Jesse is as much a rebel as some of the characters in Mr. Springsteen's trademark songs. My son reluctantly agreed to come to Hartford mainly, I think, because it was a rare chance to stay up late during a school night.

Over Jesse's intense opposition, I played the new "Magic" album in the car on the way to the concert. Jesse insisted the opening number, "Radio Nowhere" -- a high-octane, guitar-driven rocker with the intensity of Mr. Springsteen's earlier "Because the Night" or "Light of Day" -- was simply a rip-off from the band Green Day. My suggestion that Green Day might have been more influenced by Mr. Springsteen than the other way around went, as Mr. Springsteen sings, nowhere. As we headed down Interstate 84 in Connecticut, Jesse launched similar cheap shots at other new songs, mainly centered on Mr. Springsteen's vocal abilities.

But once Mr. Springsteen and the E Streeters hit the stage at the Hartford Civic Center, opening with a fiery version of "Radio Nowhere," I noticed a subtle change coming over my doubting son. He was slowly swaying to the beat.

In my completely biased view, no one performs better live than Mr. Springsteen. His shows offer a jolt of pure energy, passion and just plain fun that I've never seen equaled by countless other artists. His bandmates, each a remarkable talent, feel by this point like an extended family (Mr. Springsteen married one of them, singer Patti Scialfa). Having caught every tour since 1978, I find that his studio songs, particularly in the last 20 years, really are just drafts and can't be judged until they've been given a chance to evolve, usually over months, on the road.

That's certainly true of "Magic," his first release with the E Street Band since "The Rising," his 2002 response to the 9/11 tragedy and arguably his best work since the 1984 megahit album "Born in the U.S.A."

On a first listen, "Magic" seems somewhat overproduced and a bit disjointed. But on stage, as usual, it's a different story.

Already, a new song like "Gypsy Biker" -- apparently about the death of a soldier in Iraq -- is far more raw and powerful performed live than the muted version on the recording. Same with "Last to Die," unequivocally Mr. Springsteen's take on the Iraq war. "Who'll be the last to die for a mistake?" he sings over and over.

As with any established rock star, it's the old songs that bring the crowds back for more. Mr. Springsteen rewarded the first-night audience with many, including seven from the 1970s, ranging from "Night" and "She's the One" off his "Born to Run" masterpiece (a friend once accurately observed, "There isn't one bad note on that record.") to "Badlands" and the "Promised Land." Only "Darkness on the Edge of Town" struck me as a bit rusty.

For me, the show's absolute highlight was "Thundercrack," a song I had never heard performed live. Mr. Springsteen introduced it during the encore as being from "the original E Street Band" days, meaning pre-1975; other than bootlegs, it wasn't commercially available until the 1998 "Tracks" collection of archival material. It's a silly, rollicking tribute to a girl who's a wonder on the dance floor, and it dates to the "Rosalita" period, when his music was far more loose and experimental, with lyrics that were anything but political. The song begins with the band chanting: "Her brains they rattle and her bones they shake, Whoa, she's an angel from the Innerlake." From there, it slowly builds to a saxophone-laced frenzy.

Just before the encore, an inebriated concertgoer spilled beer on Jesse's shirt. I took that as an opportunity to ask if he might be interested in one of the Bruce Springsteen T-shirts on sale in the lobby. To my surprise (and delight), he agreed to look at the selection, and he even let me buy him one.

Even more amazing: He wore it to high school the next morning.

Write to Steve Stecklow at steve.stecklow@wsj.com
Posted by jtf at 8:09 PM