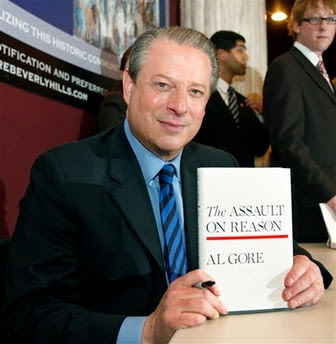 THIS YEAR'S Nobel Peace Prize justly rewards the thousands of scientists of the United Nations Intergovernmental Panel on Climate Change. These scientists are engaged in excellent, painstaking work that establishes exactly what the world should expect from climate change.

The other award winner, former US vice president Al Gore, has spent much more time telling us what to fear. While the IPCC's estimates and conclusions are grounded in careful study, Gore doesn't seem to be similarly restrained.

Gore told the world in his Academy Award-winning movie to expect 20-foot sea-level rises over this century. He ignores the findings of his Nobel co-winners, who conclude that sea levels will rise between only a half-foot and two feet over this century, with their best expectation being about one foot. That's similar to what the world experienced over the past 150 years.

Likewise, Gore agonizes over the accelerated melting of ice in Greenland and what it means for the planet, but overlooks the IPCC's conclusion that, if sustained, the current rate of melting would add just 3 inches to the sea-level rise by the end of the century. Gore also takes no notice of research showing that Greenland's temperatures were higher in 1941 than they are today.

The politician-turned-moviemaker loses sleep over a predicted rise in heat-related deaths. There's another side of the story that's inconvenient to mention: rising temperatures will reduce the number of cold spells, which are a much bigger killer than heat. The best study shows that by 2050, heat will claim 400,000 more lives, but 1.8 million fewer will die because of cold. Indeed, according to the first complete survey of the economic effects of climate change for the world, global warming will actually save lives.

Gore has helped the world to worry. Unfortunately, our attention is diverted from where it matters. Climate change is not the only problem facing the globe.

Gore concentrates on his call for world leaders to cut CO2 emissions, yet there are other policies that would do much more for the planet. Over the coming century, developing nations will be increasingly dependent on food imports from developed countries. This is not primarily a result of global warming, but a consequence of more people and less arable land in the developing world.

The number of hungry people depends much less on climate than on demographics and income. Extremely expensive cuts in carbon emissions could mean more malnourished people. If our goal is to fight malnutrition, policies like getting nutrients to those who need them are 5,000 times more effective at saving lives than spending billions of dollars cutting carbon emissions.

Likewise, global warming will probably slightly increase malaria, but CO2 reductions will be far less effective at fighting this disease than mosquito nets and medication, which can cheaply save 850,000 lives every year. By contrast, the expensive Kyoto Protocol will prevent just 1,400 deaths from malaria each year.

While we worry about the far-off effects of climate change, we do nothing to deal with issues facing the planet today. This year, malnutrition will kill almost 4 million people. About 3 million lives will be lost to HIV/AIDS, and 2 1/2 million people will die because of indoor and outdoor air pollution. A lack of micronutrients and clean drinking water will claim 2 million lives each.

With attention and money in scarce supply, we should first tackle the problems with the best solutions, doing the most good throughout the century. If we focus on solving today's problems, we will leave communities strengthened, economies more vibrant, and infrastructures more robust. This will enable these societies to deal much better with future problems - including global warming. Committing to massive cuts in carbon emissions will leave future generations poorer and less able to adapt to challenges.

Gore has an unshakable faith that climate change is the world's biggest challenge. To be fair, he deserves some recognition for his resolute passion. However, the contrast between the Nobel winners could not be sharper. The IPCC engages in meticulous research where facts rule over everything else. Gore has a different approach.

Bjorn Lomborg is adjunct professor at the Copenhagen Business School, and author of "Cool It" and "The Skeptical Environmentalist."