BRRRUUUCEE!! His concert is "Magic" 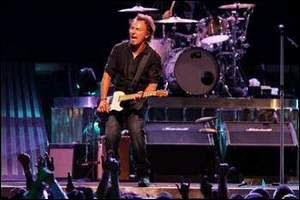 EAST RUTHERFORD — With his new tour underway and his new music well received, Bruce Springsteen took the stage at the Meadowlands last night (Tuesday, Oct. 9) with confidence and determination.

Tuesday's concert with the E Street Band was the first of four area shows in Springsteen's official "Magic" tour, which continues at Continental Airlines Arena for a second show tonight and moves across the Hudson to Madison Square Garden next week. Last week's concerts in Asbury Park, great as they were, go down as "rehearsal shows" in the official record-keeping of the tour.

"Magic," Springsteen's first effort with the E Street Band since "The Rising," is an album laced with despair and shot through with outrage. The lyrics, sobering and melancholy, lament the fallen in Iraq and criticize the federal government's methods and policies in the post-9/11 climate.

What has made "Magic" such a chart-topping success, however, is the music behind the message. The songs rock, with strong beats and fluid melodies.

The mournful wail of guitar on "Gypsy Biker" set the mood Tuesday night, reverberating around the arena like a ghost. "Livin' In The Future," a song of justified paranoia, became all the more poignant when followed by the clear-eyed tenacity of "Promised Land."

Springsteen's awe-inspiring catalog of songs fared well in the set list, with "Born To Run" as exhilarating as ever. "Dancing In The Dark" and "Brilliant Disguise" were worthy additions to a two-hour concert that celebrated melody as well as message,
The extended introduction to "Candy's Room," with Max Weinberg's drumsticks tapping in feverish rhythm, deepened the tension of the song. The band then blasted into "She's The One" without resting a beat, thrilling the audience with a one-two punch of classic Bruce. 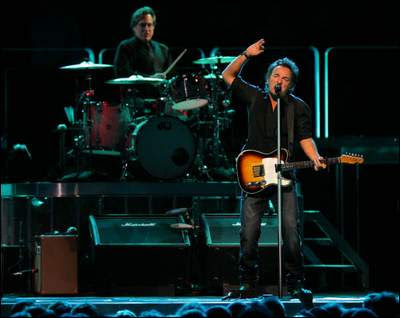 For the most part, Springsteen let the songs do the talking, though he introduced several tracks from "Magic," with explanations and warnings. The CIA's torture of detainees, he said, may well leave an indelible mark on American culture, becoming as much a part of "the American picture" as the things we cherish, from "cheeseburgers and Max's hot dogs at the Jersey Shore" to "the Bill of Rights, just below Max's hot dogs, and Clarence 'Big Man' Clemons."

Ah, yes, Clarence Clemons, saxophonist and on-stage foil. The mere mention of the man brought fans to their feet. There was quite a lot of support for the E Streeters at the Meadowlands, with fans carrying placards that read "Big Man" for Clemons, and "Mighty Max" for drummer Max Weinberg.

All with good reason. Springsteen's longtime bandmates brought passion and precision to every song.

The only flash and dazzle in the spare production came from audience members, who waved their cell phones to demand an encore, an effective new tool in smoke-free arenas. Hundreds of glowing cell phones outshone the cigarette lighters of yesteryear.

Video screens on either side of the stage offered fans dramatic close-ups of Springsteen at the microphone and guided their attention to specific band members at various points in a song. This was especially helpful when the camera zeroed in on Roy Bittan at the piano, because most of the audience could not see Bittan's hands moving across the keys.

Before the concert began, long lines formed at concession stands and in rest rooms, and excitement built among fans.

Joseph Maurice, 38, of Glen Rock, first caught Springsteen in concert during the "Born In The U.S.A." tour of 1984. Maurice found the "Magic" album appealing because the music reminds him of the classic tunes Springsteen crafted in the '80s.

"I like it because it goes back to some of the older sounds," Maurice said. "It helps that he's back with the E Street Band."

Meegan Motisi, 32, of New Rochelle, is a second-generation Bruce fan, having first heard the music from her father's record collection.

"My brother and I know every single song, every single word, because my father played the music so often while we were growing up," Motisi said. "Now when I got to shows, I bring my father home a T-shirt."

The Meadowlands concert was the first Springsteen show for Ali Donohue, 17, of Westfield, who normally gravitates to punk, ska, hardcore and indie rock.
"My dad is a fan," she explained.

Her father, Tim Donohue, 45, was pleased to introduce his daughter to "the best live show there is."

Ali Donohue was game, saying, "I'm a fan of New Jersey in general. I really like living here and being from here, and I feel Bruce Springsteen really embodies that." 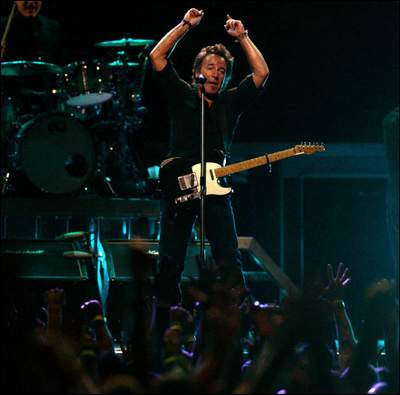