Springsteen shares a dose of protest with fans 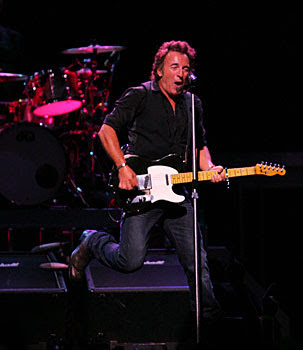 Bruce Springsteen's acolytes can recall a time when their particular politics didn't affect whether they enjoyed his shows.

How can it not when, during the first of two sold-out nights at Continental Arena on Tuesday, he invoked a fictional "Gypsy Biker" killed in a war waged by "profiteers" and "speculators"? Or when he defiantly asked who'll be the "Last to Die" for a "mistake"?

Both were from his latest album, "Magic," whose folkish title song is an anti-Bush allegory about how those desperate to believe can be fooled by a cunning leader's sleight-of-hand.

"Trust none of what you hear and less of what you see," Springsteen sang to more than 20,000 strong, his strum-and-twang giving way to mournful wailing with his wife, Patti Scialfa.

This was no illusion, though.

Nuggets like "She's the One" and the pre-fame "Thundercrack" were certainly appealing -- magic in the night, if you will.

But Tuesday's two-hour convocation was steeped in '60s-era protest music. It was a political rally wrapped in power chords, coming as it did as the nation begins ramping up to the presidential primaries.

The masses bopped in time to the bouncy "Livin' in the Future," even as Springsteen sang of a failure that could well have been George Bush's reelection: "My faith's been torn asunder/ Tell me is that rollin' thunder/ Or just the sinking sound/ Of something righteous goin' under?"

"New Jersey! Is there anybody alive out there?" he shouted, launching the show with "Radio Nowhere," a curiously radio-friendly rant against a taste-challenged culture. Springsteen then leaped into the inspiring "No Surrender," coaxing sidekick Steve Van Zandt to the microphone and closing with the final chords of Elvis Costello's "Radio Radio."

Counting off the songs, Springsteen steered the black-clad E Streeters through a series of set pieces, driving them home at times with sonic guitar or wailing harmonica. He showed his harp-playing chops on a stomping, ZZ Top-styled "Reason to Believe," then sent the long-timers into a frenzy with the machine-gun spray of "Candy's Room." 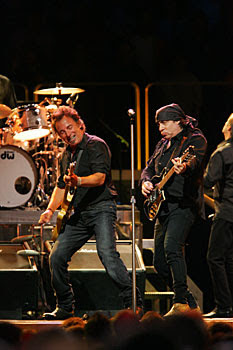 Playing behind him for the first time since he stumped for John Kerry on the 2004 "Move On" tour, the band had its flaws, their collective rhythm tripping up at times. They were tightest on the newer material -- guitarist Nils Lofgren juggling scorching riffs with Van Zandt; Danny Federici and Roy Bittan twinkling through the lush orchestration; violinist Suzie Tyrell, bassist Gary W. Tallent, and Scialfa filling their roles; and the icons Van Zandt, Clarence Clemons and Max Weinberg forming the best supporting cast since that now-defunct cable show about the anxious mob boss from West Caldwell.

At 58, Bruce is no longer the hardest-working man in show business. He doesn't stalk the stage anymore and pretty much kept his feet planted during a "Dancing in the Dark" encore -- a modern-day version of Elvis Presley shot from the waist up. He nonetheless stirred the beer-swigging throng, who responded with their own wall of sound each time the pride of Freehold thrust his fist or fretboard into the air.

Springsteen teased the Johnny-come-latelys during the "Thundercrack" encore, saying "they were louder in Philly" the other night. Moments later, they sang along in full throat on the requisite houselights-up "Born to Run."

None of the tunes from "Magic" had the anthemic weight of "Born to Run" -- or that of "The Rising" or "Lonesome Day," which he sprinkled into the set. But the new numbers had the same edge, as well as a familiar sonic ring. And by delivering it so soberly, with nary a butt wiggle or deep-knee bend, Springsteen may have found a compromise between his quieter performances and the rock-and-roll traveling redemption shows that have now receded into history. Either that or his rheumatism was acting up.

For anyone who could hear him through the din, Springsteen delivered a state of our union underpinned by genuine love for country.

"My father said, 'Son, we're lucky in this town/ It's a beautiful place to be born,' " he sang in the shimmering "Long Walk Home." " 'It just wraps its arms around you/ Nobody crowds you, nobody goes it alone./ The flag flyin' over the courthouse/ Means certain things are set in stone./Who we are and what we'll do and what we won't.' "

The rally closed with the jig (or is it reel?) of "American Land," from the Seeger sessions, as Tyrell hit a jaunty stride and follow-the-bouncing ball lyrics flashed on the jumbo screens above the stage. It was at that point that Springsteen really got into the act, marching from one side of the stage to the other, waving his pick hand at the crowd.

Whether they'll vote with him or not, Springsteen pulled the neat trick of making his audience a community. Like one of his idols, the late Harry Chapin, he reminded everyone that no matter what their individual intelligence or background, no matter how dislocated and alienated they may feel -- from friends, loved ones, colleagues -- they could connect with one another, at least for a couple of hours.

What they did once they left the revival tent was up to them. 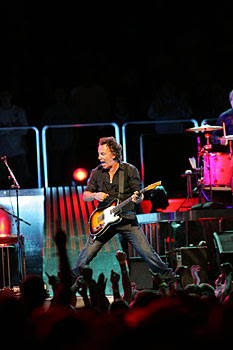