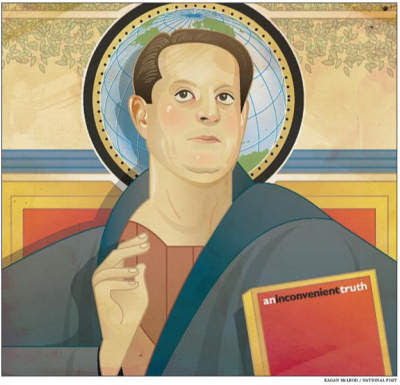 Further damage to a once prestigious award.

Parson Al winning the Nobel Peace Prize was as predictable as his Oscar for Best Documentary, and represents the final debasement of a once-prestigious award. It used to be that the award went to people of genuine humanitarian or diplomatic accomplishment, like Mother Teresa, Albert Schweitzer or Doctors Without Borders. Now it goes to frauds and poseurs like Rigoberta Menchu, Yassir Arafat, the U.N. (three times now, counting Gore’s co-winner, the U.N.’s climate change panel), and Jimmy Carter.

About the only way to top this would be to give the next Peace Prize to Jesse Jackson and Al Sharpton. More likely the Nobel committee will, one of these days, simply pat itself on the back and give the award to . . . themselves.

The glitter of the Nobel overshadows the inconvenient news reported last week that a British court of law labeled Gore’s movie as partisan political propaganda, pointing out 11 different errors of fact or scientific judgment, and prohibiting its screening in British public schools without a disclaimer of these defects. The Nobel will be one more quiver in Gore’s arsenal of intransigent moral authority by which he refuses to debate any aspect of the subject and declares the entire matter “settled.” It’s never a good sign when politicians declare a scientific matter settled; we all remember how well that worked out for the Vatican when they told Galileo 400 years ago that astronomy was settled. It is even more problematic to suggest that climate change is not a political issue, but a moral issue, but then to demand massive political interventions in the economy to fix the problem.

The adrenaline rush of the Nobel is likely to prove evanescent, however, and will probably turn out to be the high water mark of climate hysteria. Increasingly, climate catastrophe is coming more and more to resemble the hysteria over the “population bomb” of the late 1960s and early 1970s. In those days, Paul Ehrlich was a frequent guest on Johnny Carson’s Tonight Show, and there were government commissions launched here and abroad to ponder whether we needed an aggressive anti-natalist policy. The effort to develop a population policy in the U.S. collapsed quickly and quietly when someone pointed out that any anti-natalist policy would disproportionately affect racial and ethnic minorities.

Oops. Population pressures were and remain a genuine environmental concern, but it gradually became clear that Ehrlich and other alarmists had way overestimated the problem, and it looks very different today. (Indeed, the great social problem of the end of this century may be population that is falling too rapidly.) And while Ehrlich is still peddling the same Malthusian gloom, he never turns up on the Tonight Show any more; in fact, he doesn’t even make it on Hardball or Countdown with Krazy Keith.

Likewise, climate change is a real phenomenon, but the catastrophic scenario of Gore and his fellow climate campaigners is steadily fraying around the edges if you follow the scientific literature closely. Has anyone noticed, for example, that global temperature has been flat for the last decade, after two decades of slow and steady increase from 1980 to 1998? Most of the climate models suggest global temperature should be consistently warming with the rise of greenhouse gases, but it has stopped. This increasingly inconvenient truth will eventually become too obvious for even the media to ignore. Meanwhile, the real world economic consequences of Gore’s policy agenda (which Obama and Edwards—but not Hillary—have signed up for) are so extreme that no self-governing people will ever submit to it, which is why a few environmentalists have gone so far as to say openly, “down with democracy.” Go ahead; make my day; try that out on the American people. The Democratic Congress can’t even pass a modest emissions trading scheme that would barely begin to enact Gore’s agenda, because they are afraid of its cost.

Prediction: In 20 years Gore or his climate alarmist successors will be lucky to appear on cable access TV, and Gore’s Peace Prize will take its place alongside Le Duc Tho’s 1973 award as a Nobel embarrassment.

—Steven Hayward is a resident scholar at the American Enterprise Institute, and co-author of the annual Index of Leading Environmental Indicators (Pacific Research Institute/AEI).