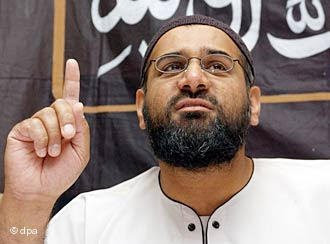 “Who are we? We are Islam is peace. We want to eradicate Islamophobia. Our home is Britain. And we represent peace.”

It’s a new ad campaign in Britain: Islam is Peace. Buses and trains are sporting the legend, “Islam is Peace,” and an array of images, including that of a Muslim policewoman, a Muslim scout group, and a Muslim chef, attempt to show that Muslims in Britain are ordinary citizens, and should not be regarded with suspicion.

The group’s website derides as a “misconception” the idea that “jihad means holy war.” It speaks about jihad as involving a “struggle to improve the quality of life in society and the struggle against injustice, oppression and tyranny,” but says nothing about armed struggle. It leaves unexplained how innumerable thousands of Muslims worldwide could have gotten the idea that jihad had something to do with violence. The site also dismisses the idea that “terrorism is supported in Islam,” saying, “this misconception is one of the most widely held misconceptions about Islam today,” and quoting the Qur’an to show that “it is clearly Islamically unlawful to murder an innocent person.” However, it doesn’t specify what qualifies a person as innocent, and thus does not answer the jihadist claim that no non-Muslim can be innocent.

The British jihadist leader Anjem Chaudary articulated this view several years ago on British television, when he told an incredulous interviewer that “as far as Muslims are concerned, you are innocent if you are a Muslim.”So if you condemn attacks on innocents, you’ve done nothing -- absolutely nothing -- to condemn the actual jihadist point of view. The Islam is Peace campaign centers around a five-point plan:

1. To monitor and fight Islamophobia wherever it occurs.

2. To create permanent channels of dialogue and debate between the Muslim community and the rest of Britain, ensuring that your voice is always in the mainstream media. To partner with business and government to ensure that our concerns such as racism and social exclusion are understood.

3. To call upon our government to work towards a just and lasting peace in areas of conflict around the world, helping eliminate the injustices that foment division and nurture violence.

4. To be creative. To ensure that we have our finger on the pulse of the British mainstream. To understand what our community wants the world to hear.

A few things are glaringly absent from these five points. There is not one word about fighting against the jihadist ideology of Islamic supremacism within English mosques and Islamic schools. Instead, point one of the campaign is to fight against undefined Islamophobia, as if the only reason why anyone regarded Muslims with suspicion was because of bigotry and hatred by non-Muslims.

Well, I’ve got news for you. If “Islamophobia” actually exists at all, it is a result of the over nine thousand violent attacks committed by Muslims in the name of Islam since 9/11. If the Islam is Peace organizers really want to end “Islamophobia,” here is a simple five-point plan of my own.

To end “Islamophobia,” Muslims should:

1. Focus their indignation on Muslims committing violent acts in the name of Islam, not on non-Muslims reporting on those acts.

2. Renounce definitively not just "terrorism," but any intention to replace the U.S. Constitution (or the constitutions of any non-Muslim state) with Sharia even by peaceful means.

3. Teach Muslims the imperative of coexisting peacefully as equals with non-Muslims on an indefinite basis.

4. Begin comprehensive international programs in mosques all over the world to teach against the ideas of violent jihad and Islamic supremacism.

If Muslims do those five things, voila! “Islamophobia” will vanish. No slick PR campaigns will be needed.

Mr. Spencer is director of Jihad Watch and author of "The Politically Incorrect Guide to Islam (and the Crusades)" , "The Truth About Muhammad" and "Religion of Peace?" (all from Regnery -- a HUMAN EVENTS sister company).

Here are a few of the comments submitted by our readers.