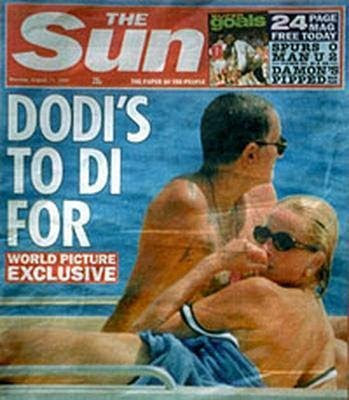 Last week, a London court began pondering the vexed question of whether Diana, Princess of Wales, was, ahem, murdered. There was so much public suspicion, declared the coroner, Lord Justice Scott Baker, that it was time for the rumors to be either "dispelled or substantiated."

So who killed her? On the night of Diana's death in 1997, there were apparently two top agents for MI6, the British secret service, on the loose in Paris, and possibly a third, if you believe that Henri Paul, the chauffeur, was also on the spooks' payroll.

That's the theory of Mohammed Fayed, Monsieur Paul's employer and father of the princess's last boyfriend, Dodi. Fayed asserts that Diana was at the time of her death carrying Dodi's baby, and thus the car crash was arranged because Buckingham Palace decided it would be unacceptable for Prince William, the future king, to have a Muslim stepbrother, a Muslim step-dad, and a soon-to-be-Muslim mom.

The Princess of Wales' fortuitous demise was, as Fayed puts it, "murder in the furtherance of a conspiracy by the Establishment, in particular His Royal Highness Prince Philip, Duke of Edinburgh, who used the secret services to carry it out." It is not thought His Royal Highness will be called to testify.

Look, I like a conspiracy theory as much as the next guy, and I'm entirely prepared to consider the possibility that Di got whacked. But not because she was dating a Muslim.

On hearing the news that the princess' new beau was a Mohammedan, the British establishment would have been more likely to pop the champagne than order up a hit team.

One can easily picture the calculations: Excellent! Sums up the new Britain. A Muslim in the Royal Blended Family, just the kind of dynamic multicultural rebranding we need. Di will be a role model for Muslim women in northern England. Show the bloody Yanks a thing or two as well: Anyone can grow up to be president? Ha! In Britain, any old Muslim can grow up to join the Royal Family, etc. 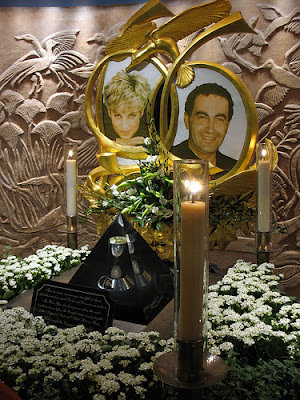 Diana and Dodi memorial in Harrods

But times change, and in the new Commonwealth the Princess of Wales would have been boffo in Britain because she was divorced and boffo in Malaysia because she was Muslim. She would have embodied so-called "Prada Islam" – the stylish sophisticated Euro-Muslims at ease with both sides of their identity. After years of shagging cavalry officers and other assorted chinless wonders from the English upper class, Diana had finally made a smart move. Tony Blair would have been kicking himself for not thinking of it first.

You see something similar in the persistent stream of e-mails from readers demanding to know why I don't refer to Barack Obama as "Barack Hussein Obama," that being his full dress handle. The argument is that, if you use his middle name, people will realize he's some sort of Indonesian madrassah alumnus, and his numbers will head south.

Well, his numbers seem to be heading south without any help from me. My correspondents might be better advised to demand that I start referring to Hillary Saddam Clinton. But that's not the reason I demur. Like Fayed, they're mistaking a virtue for a liability. If the Right were to start insisting that Sen. Obama is not the first African-American president-in-waiting but the first Islamo-African-American president-in-waiting, a big chunk of progressive voters would merely go: Wow! Even cooler.

The senator surely knows that. When he was at school, he was known as Barry Obama, and if he were concerned about excessive exoticness that's presumably what he'd be running as. But he's not: He knows his market, and he has no reason to fake being a regular Joe (Biden). He's now, ostentatiously if somewhat clumsily, announced that he's foresworn the Stars-and-Stripes pins so ubiquitous on politicians' lapels these past six years. He said he felt it had become a "substitute" for "true patriotism." But you can't help feeling that among his constituency in Democratic primaries the lapel flag just seems crass and squaresville. Too obvious.

Stable democratic institutions sustained across the centuries are so rare on this planet that, if you live in one of the handful of countries to have them, it's easy to get complacent, and then bored, and then to start looking elsewhere for something with a bit more of a kick. 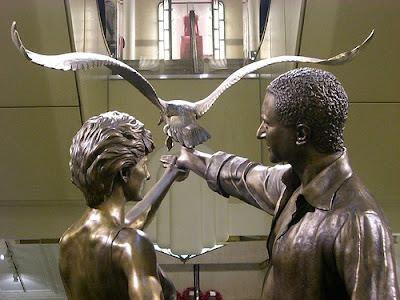 Diana, princess of wales and Dodi Fayed tribute at Harrods

That's something else they know about in the House of Windsor. After all, there's not much point getting the princess eliminated for going Muslim when the Prince of Wales himself has a roaring case of Islamofever.

Even though he will one day be, like his mother, Supreme Governor of the Church of England, he's had an "Islamic garden" built at his home. It was designed by the Muslim great-grand-daughter of Herbert Asquith, the prime minister who took Britain into the Great War and thus ended the caliphate. Ninety years on, Charles gives the impression he'd far rather be a caliph than a king. He loves dressing up in Muslim garb. A couple of days after 9/11, for a dinner engagement with a sibling of Osama bin Laden, he got dolled up like a Saudi prince and amused the guests with droll cracks like, "So, what's your brother doing these days?" On present course, he seems more likely to be crowned as the first emir of the United Kingdom.

National Review's David Pryce-Jones made the point that, in persisting with his lurid accusations, Mohammed Fayed revealed how little he understands Britain: He's lived there for years, it's been good to him, he owns Harrod's and the Paris Ritz and various other baubles. No big deal. He's one of many, many beneficiaries of Western openness to "the other." And yet he's convinced himself that Buckingham Palace is so consumed by "Islamophobia" that the queen's husband dialed M, and M called in Moneypenny, and Moneypenny faxed 007, and a week later the princess and her Islamostud are dead.

Reality is more humdrum: In multiculti Britain, everyone was indifferent to Di's Muslim lover. Could have been a Hindu, could have been a Buddhist. Who cares? But, instead, Fayed has retreated into the paranoia and victim mentality that stunts so much of the Muslim world. A while back, I was in Jordan, and a wealthy Saudi told me that the Iraq war was part of a continuous Western assault on Islam that includes the British Royal Family's assassination of Dodi Fayed. And so, in a London courtroom, a freak one-off celebrity death becomes just another snapshot of the big geopolitical picture.

you will see PHOTOS of WHO and WHERE Bin Laden and his NETWORKS ARE....

PLEASE FORWARD THIS INFORMATION TO THE FBI
gavriild@gmail.com