Time has come for classy Joe to go 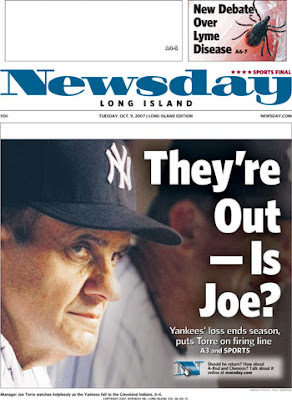 So we have a seventh straight season without a Yankees parade up the Canyon of Heroes, and barring a shocking change of heart by both George Steinbrenner and his front-office lieutenants, Joe Torre has managed his last game in pinstripes.

The dismissal of Torre will be a sad move for many people in the Yankees organization and the fan base (although that fan support has dwindled). But it will be the right move.

It's time for the Yankees to move forward in their organizational renovation, and that should include a new manager. Just like any industry, beliefs have changed significantly in baseball since the Yankees brought Torre aboard in 1996, and a manager's responsibilities and expectations have been modified accordingly.

1. Torre's $7 million salary has never seemed more outdated. Managers' salaries have not increased in conjunction with those of the players, because most organizations feel that a manager simply isn't important enough to earn that kind of money.

2. Managers are much more extensions of their front office, philosophically, than they once were. While Torre and Yankees general manager Brian Cashman have an excellent personal relationship - Cashman battled to save Torre's job a year ago - Torre and Cashman aren't entirely on the same page when it comes to player deployment.

This isn't really about the seven straight "disappointing" postseasons, because October brings such randomness with its short series. Even if those transgressions hurt Steinbrenner the most, the more rational decision-makers will cite the other issues as the reason for change.

First comes the money, since that served as a primary impetus last year for bringing back Torre. Cashman and the now-departed Steve Swindal argued that it didn't make sense to pay Torre $7 million for a year's vacation while paying a second person to manage the team. 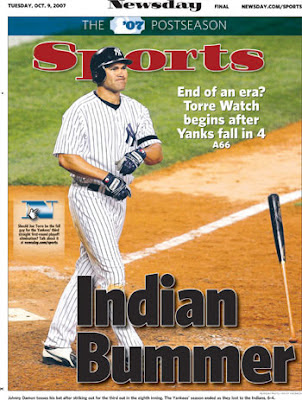 Now that Torre is off the books, however, the only way you could justify such an extravagant salary - with the Cubs' Lou Piniella ranking second at $3.5 million - would be if Torre were winning the World Series every year.

As for player deployment, Torre is the first person to say that, all things being equal, he prefers veteran players to youngsters. That's not the way of the baseball world anymore. Cheap, durable, versatile youngsters rule the day, a trend that Cashman has endorsed wholeheartedly.

Torre has improved in this area; witness the development and importance of kids like Robinson Cano, Melky Cabrera and Game 3 winner Phil Hughes. Nevertheless, if you followed this season closely enough, you saw that Torre let rookies like Shelley Duncan and Edwar Ramirez wither away from a lack of use, while going to relievers like Scott Proctor and Luis Vizcaino so often that he wore them down. With so many talented youngsters now in the Yankees' farm system, you want to make sure you fully trust the person using them.

What the Yankees aren't sure they can replace - whether it's with Don Mattingly, Joe Girardi or someone else - is Torre's ability to guide the team through the grind of a 162-game season, replete with the pressures from ownership and the media. No one else has even attempted such a task, as when Buck Showalter managed the Yankees back in 1995, he dealt with a media corps that was a fraction of what it is now.

Nevertheless, it's worth noting, when discussing how Torre guided the team from a 21-29 record to the American League wild card this year, that plenty of other managers have experience with midseason turnarounds. This season alone, Piniella's Cubs, the Phillies and the Rockies went from oblivion to October, just like the Yankees. Granted, none did it here. But maybe we're overestimating that whole "here" thing.

Torre belongs in the Baseball Hall of Fame for what he did with the Yankees. He brought dignity to his office at every turn, whether he was winning, or battling prostate cancer, or bringing his Safe at Home Foundation around the tri-state area. On a personal level, it has been a pleasure covering him and dealing with him.

Yet no one's job lasts forever, and no one job is intended for just one person. Torre deserves a lifetime standing ovation, but not lifetime tenure. 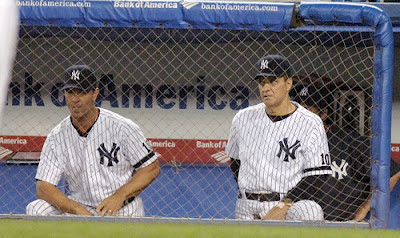 Who's next in line?

2. Joe Girardi. A Bronx fan favorite who managed the 2006 Marlins to an overachieving season - but got fired anyway for insubordination.

3. Tony Pena. Energetic, engaging, but is Yankees first-base coach a big enough name and personality for this extremely challenging job?

4. Bobby Valentine. Definitely has a big enough name and personality. Is it too big, given the media demands?

The Yankees in the playoffs since beating the Mets in the 2000 World Series:

[There is certainly merit to Mr. Davidoff's column...hence it's appearance here...but I sure have a tough time swallowing this move on an emotional level. - jtf]
Posted by jtf at 11:10 AM