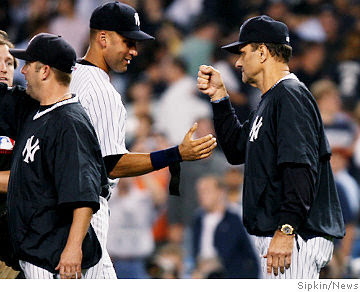 New York Daily News
Monday, October 8th 2007, 4:00 AM
More ALDS coverage:
Click here for complete Game 3 coverage
Click here for our Yankee team page
Read Mark Feinsand's Blogging the Bombers (with audio)
Read fan blog Subway Squawkers
Read Jesse Spector's Inside the Pitching Matchups
Bombers bounce back! Join the discussion
Click here to buy Yankee playoff tickets
The Yankees bought themselves and Joe Torre a stay of execution last night, even though Roger Clemens, in what was probably the last start of his career, was anything but a savior.
They get to play another day and Torre gets to manage another day because Jake Westbrook wasn't Fausto Carmona or C.C. Sabathia, and 21-year-old Phil Hughes wasn't Clemens. They play on because the Cleveland Indians, after staking out a three-run lead with runs in the first three innings, wilted amid the sudden awakening of Yankee bats and the din of the rejuvenated Stadium crowd in an 8-4 Bombers win.
Heaven knows, the Yankees came into the game with a whole lot of pressure and bad karma going against them, including, of course, George Steinbrenner's publicized proclamation that Torre's job was "on the line" if they suffered the ignominy of a third straight first-round kayo. And in that regard, they were 2-6 when facing elimination starting with losing Game 7 of the 2001 World Series to the Arizona Diamondbacks.
Now, at least, they're 3-6 and still kicking.
Certainly, Torre knew it was a lot to expect the 45-year-old Clemens, who hadn't pitched in 22 days because of a strained left hamstring, fulfilling his savior expectations, and sure enough, 59 pitches into the game, Clemens was history. Literally. It is unrealistic to expect the Rocket to try to pitch any more on his fragile, aged legs and, in a bittersweet sort of way, it's time the Yankees stopped relying on old pitchers to stabilize their rotation, and get on with the future.
And last night that future was Hughes, the rookie righthander 24 years Clemens' junior, who came on in relief when the old warhorse limped off the mound with one on and one out in the third and pitched the Yankees into the seventh and to Joba Chamberlain without bugs. After yielding a two-out double to Jhonny Peralta that made the score 3-0 in the third, Hughes was touched for only one other hit in his 3-2/3 innings of saving relief, walking none and striking out four.
"He was huge for them," Indians manager Eric Wedge said of Hughes. "He had a live fastball, a tough breaking ball and then he started mixing in changeups. He showed a lot of poise."
"I remember telling (Hughes) in spring training, 'You're not going to start the season for us but there may be some day this year somebody's going to tap you on the shoulder and say it's your turn,'" Torre said. "I certainly didn't envision that as coming out of the bullpen in the division series, but he took it and was very calm for a youngster with the inexperience and all that."
Just as big for Torre were the Yankee batters, who'd hit .121 in the first two games of the series. After continuing to sputter against Westbrook for the first four innings, hitting into three double plays, they finally broke through with a four-run salvo in the fifth, capped by Johnny Damon's three-run homer into the right-field seats. A sinkerball specialist as opposed to power pitchers Carmona and Sabathia, Westbrook had succeeded in getting 11 ground-ball outs in the first four innings before being rocked with one out in the fifth by an opposite-field single by Hideki Matsui, a double into the left-field corner by Robinson Cano, an RBI single to left by Melky Cabrera and then Damon's homer, which got the Stadium crowd of 56,358 really rocking.
"We knew our backs were against the wall and that was a lot on the line tonight," said Damon. "We're playing for a manager we love, hoping to extend the season for as long as we can. We understand as players that Mr. Steinbrenner is the boss and makes the decisions. As players, we've battled through adversity all season and now is another time. I think Joe Torre has meant so much to the Yankee organization and you know we get to play for him another day and hopefully a lot longer."
Whatever thoughts Steinbrenner had about replacing Torre, whatever candidates he might be pondering, they go on hold for at least another day and with a matchup of junkballer Paul Byrd, the Tribe's No.4 starter, and Chien-Ming Wang tonight, it is not unreasonable to think the Yankees can extend this last stand for Torre to Wednesday in Cleveland.
"You work here, you understand the pressure everybody's under to win all the time," Torre said. "The only thing I try to do is allow my players to roll the dice out there and play because every time we go to the postseason, there's nothing that's gonna satisfy anybody unless you win the World Series."
Who knows what's going on in his head right now? Before the game, Torre said: "I'll save all that for later on when I've got nothing else to do here."
For another day, he still has something to do, still has a game to manage, still has a team in the tournament, which is more than Charlie Manuel, Lou Piniella and Mike Scioscia can say. And unlike a year ago when his team, facing another elimination in Detroit, didn't even show up for the final game of the ALDS, last night his hitters found their bats for him and his two kid pitchers, Hughes and Chamberlain, gave him another glimpse of what the future holds around here.
Still, as they say in baseball jargon, it remains "day-to-day" whether that future will include Torre.
bmadden@nydailynews.com
Posted by jtf at 6:58 AM