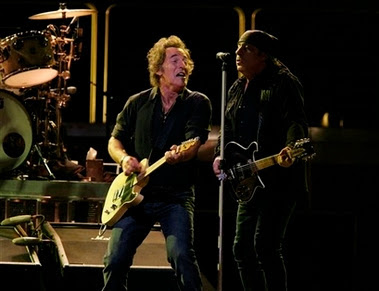 Bruce Springsteen performs alongside Little Steven Van Zandt of the E Street Band at the Wachovia Center in Philadelphia Friday Oct. 5, 2007.
« Magic ...in South Philadelphia Main
Bruce, Part II
Second Springsteen show at the Wachovia Center: better than the first. (A review of which is here.) Looser, smoother, more effortless. Not as rocked-out so much by the Boss' force of will as the natural momentum of the music. I heard a few complaints about the murky, too-loud sound mix after Friday's show, and it was boomy and abrasive where I sat on the left side of the stage the first night, but much better towards the back on Saturday.
Other assorted observations, from a second look. I liked the pairing of "Livin' In the Future" and "Promised Land": One about broken promises, the other about a stubborn belief that you can keep them, at least the ones you make to yourself. The introduction to "Livin'," which is Springsteen's main political speech of the night, however, weighs the song down with more baggage than it can hold. Is that jaunty, "10 Ave. Freeze Out"-ish number really about "rendition ... illegal wiretapping .. attack on our civil liberties" and "the things that are happening in the last six years" that is, under the Bush administration since Sept. 11 - "that aren't supposed to happen here"? Maybe to Bruce it is, but it seems to me he 's weighing it down with more political baggage than the song can hold. More to the point is the pithy line from "Last To Die," about the death toll in Iraq: "We don't measure the blood we've drawn anymore/We just stack the bodies outside the door."
The full band Little Walter-style roadhouse blues "Reason to Believe" is excellent, a nicely filled out and opened up version of the song that he did as an intentionally distorted foot stomp to start the Devils & Dust shows. Great Nils Lofgren slide playing, as well as Miami Steve's "Brian Jones teardrop guitar," as Stones authority Tom Sheehy put it...
All of the set list changes from the first night worked, with a surging "Night" as the opener, before "Radio Nowhere"; "Prove It All Night" in place of "No Surrender"; and "The Ties That Bind" instead of "Candy's Room." And the middle of the set got considerably juiced when, after Springsteen sang a duet with his wife Patti Scialfa on "Town Called Heartbreak," a tune from her Play It As It Lays that's got some 'Retha "Chain of Fools" energy, he gave it up for the old fans with a superb "Incident on 57th Street," one of his greatest, most sadly beautiful story songs, and, I must say, always my favorite from The Wild, the Innocent and the E Street Shuffle. Give me an "Incident" this good, and I'll be just fine without "Rosalita." And that was followed by a ripping "Cadillac Ranch," during which Springsteen seemed to catch Steve Van Zandt unawares when he shouted out "Steve! Guitar solo!"
As for the encores, they were the same as the previous night, except for "Dancing In The Dark" replacing "Waitin' On A Sunny Day." "Thundercrack" was a goofy, good time, as always, but it's strange to me how it's attained such a mythic quality in the Springsteen catalog. I guess it's because it was never released around the time of it's conception, so it has a romantic allure. It was nice, though, that he gave a shout out to the Main Point in Bryn Mawr, though he nipped the cheers by chortling to himself "it didn't fit that many people, you couldn't have been there ..."
"American Land," it seems, is the Magic tour show closer, this year's "Land of Hope and Dreams." It's a song that represents a big, inclusive idea of America where there's room for everybody - "The Blacks, the Irish, the Italians, the Germans and the Jews/The Puerto Ricans, illegals, the Asians, Arabs miles from home" all of whom "come across the water with a fire down below." It sounds like the Pogues, and if anybody that isn't too bummed he didn't play "Thunder Road" wants to seek it out, it's a Springsteen original on the Live in Dublin CD from last year's tour with the Seeger Sessions Band.
Here's the set list:
Night
Radio Nowhere
Prove It All Night
Gypsy Biker
Magic
Reason to Believe
The Ties That Bind
She's the One
Livin' in the Future
The Promised Land
Town Called Heartbreak
Incident on 57th Street
Cadillac Ranch
Devil's Arcade
The Rising
Last to Die
Long Walk Home
Badlands
Girls in Their Summer Clothes
Thundercrack
Born to Run
Dancing In The Dark
American Land
Posted by Dan DeLuca on October 6, 2007 11:58 PM Permalink

Dan Deluca is the music critic for the Philadelphia Inquirer.
Posted by jtf at 7:22 AM