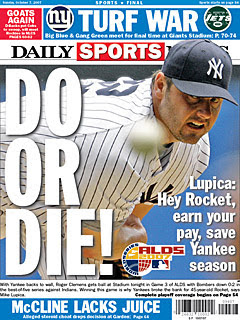 He first pitched an October game of great consequence in New York 21 years ago, for the Red Sox, and even though Roger Clemens wasn't around for the finish of that one, it only turned out to be one of the most famous postseason games ever played here.

It was Game 6 of the 1986 World Series between Clemens' Red Sox and the Mets. Clemens started that one and left with the lead and all this time later, there is still dispute in Boston about whether he asked John McNamara, the Boston manager, to take him out or if McNamara did it on his own.

Clemens was 24. And no one could have dreamed that night in October of '86 that he would still be around to pitch another game like it in New York, or do it at Yankee Stadium, or do it in pinstripes.

But he does. Clemens gets the ball against the Indians tonight. Even in the first round, it is the biggest game he has ever pitched for the Yankees, the one he made sound like it was practically his civic duty to come back and pitch when he announced his Yankee comeback, to all manner of Yankee foofaraw and fanfare, one Sunday afternoon at the Stadium.

Clemens gets the ball, that chance tonight, with this start. So save.

"There's nobody better to pick us up than Roger," Torre told the media in Cleveland.

We will see about that tonight as Clemens becomes Torre's annual choice to pitch Game 3 of the division series, what has become the Geezer Game for Torre's Yankees.

Oh sure. The Geezer Game. In the years when Clemens was gone from the Yankees - the Family Guy gone home to Houston to pitch for the Astros along with Andy Pettitte (who DID pitch like a total star in Cleveland in the game HE was brought back to pitch) - Randy Johnson twice pitched the Geezer Game for the Yankees and twice came up smaller than an executive at Dolan's Garden.

Johnson got popped by the Angels at the Stadium when he could have put the Yankees up 2-1 in the first round in '05. Got popped by the Tigers last October at Comerica Park with another division series at 1-1, outpitched that night by their geezer, Kenny Rogers.

Now Clemens, who hasn't pitched since Sept. 16, who was paid a million bucks a start to come back and has produced exactly six victories so far and a 6-6 record, isn't asked to put the Yankees ahead of the Indians. He is asked to keep the Yankee season, one he pledged to come back and save, very much alive.

At the age of 45, he is asked to be young again, and then wait for his offense to score about nine thousand runs the way we expected it to against the Indians.

If he does not, if the Yankees lose the game tonight, this time when Clemens walks off the mound he might really, actually, finally, officially and once and for all, walk off a major league pitching mound for good.

In the season of Joba and Phil Hughes and Ian Kennedy, in the season when the talk of young pitching and young pitchers has dominated all Yankee conversation that did not involve Alex Rodriguez, the old man is asked to do his share to get the Yankees just to another game on Monday night.

The Yankees look to him, and he has won big October games for the Yankees before - remember Game 2 against the Mets in the Subway Series of 2000? - and they look to A-Rod. Because if the two of them don't deliver, then maybe this could be A-Rod's last game as a Yankee as well.

Talk first about Clemens, asked to win the Geezer Game that Tom Glavine could not win for the Mets one week ago. Roger Clemens was paid all that money to come back and make things right with the Yankee starting rotation, pitch the way he did against the Red Sox in Fenway when the Yankees and Red Sox played their last regular season game, when the Yankees still were thinking they could win the AL East.

It is another win-or-go-home game for the Yankees, match point much too early in the playoffs. Again. Starting with Game 7 against the Diamondbacks in the '01 World Series, the Yankees have played eight games like this one in all the Octobers when they have tried to get back on top, so often with geezer pitchers. They have won two of them: Game 7 against the Red Sox in the '03 ALCS, Game 4 against the Angels in the ALDS of '04.

All the other times, in the first round, in the league championship series, in the World Series against the Marlins, they have lost the game they needed to win to keep going.

Can they come back? After everything that has happened since the Yankees last won it all, I still think they will. And of course it is easy to see how different everything looks if the Yankees can get a game tonight.

Clemens is supposed to help them get it. He wasn't just paid to pitch this game, he was paid to win it. One of the most famous starters in all of baseball history is supposed to save a season tonight.
Posted by jtf at 4:51 PM