Born to run with the Boss 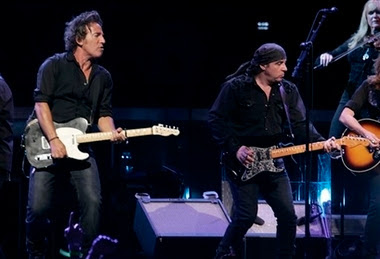 For Bruce-o-philes, Springsteen's Canadian stops on his world tour will be a chance for another family reunion - with the working-class hero who brings them closer to their loved ones

They may not be born in the U.S.A., but Canadians love Bruce too.

When Bruce Springsteen plays in Ottawa on Sunday and Toronto on Monday, he'll be greeted by Canadian fans who verge on the fanatic.

To them, he's more than an American icon - he's the soundtrack of their lives, their hero and often the tie that binds them to their closest friends and family.

"We don't keep in touch all the time," says Paul Sweeney, a 45-year-old Ottawa property manager, about his brother Brian. 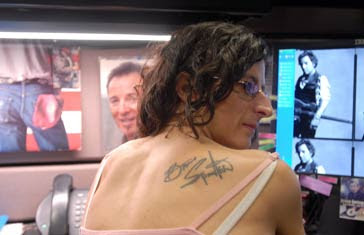 Karen Graham, 42, who works at a Montreal brokerage firm, got Bruce Springsteen's autograph through the fence at a private airport in Buffalo - and turned it into a tatoo. (John Morstad for The Globe and Mail)

"But when Springsteen comes around, we get together. It's a common bond between us."

They'll catch the concert in Ottawa together - the seventh show for Paul and the ninth for Brian.

Dana Beech of Ajax, Ont., met her husband when he was the bus driver for her trip to a Springsteen concert in Detroit. Now, when he complains about her going to yet another show - the Toronto concert will be her 33rd - she reminds him that her "obsession" brought them together.

Ms. Beech discovered Mr. Springsteen when she was 8, after her parents' divorce. She listened to Wild Billy's Circus Story over and over. "It just transported me to a better place."

She's bonded with friends while camping out before concerts in New York and while touring landmarks in Mr. Springsteen's hometown of Asbury Park, N.J.

"I really cherish what Bruce has brought to my life in terms of friendships," Ms. Beech says.

And they don't just talk about set lists, she says; they share stories about kids and talk about work issues as well.

Plenty of musicians have fans, but Bruce-o-philes are a different breed.

Springsteen lovers belie the stereotype of superfans as obsessive loners, says Daniel Cavicchi, author of Tramps Like Us: Music and Meaning Among Springsteen Fans.

"I found fans who not only carried around in their heads this idea of belonging together, of a fellowship - they worked really hard to make it real," says Dr. Cavicchi, an associate professor of American studies at the Rhode Island School of Design.

Springsteen fandom is also something that's handed down through generations. Tony Pacheco, a musician from Dutton, Ont., wanted to name his son Reno, after the 2005 song. His girlfriend nixed the idea after listening to the lyrics, which vividly describe an encounter with a prostitute.

Still, when she was pregnant, Mr. Pacheco often played another Springsteen tune, Radio Nowhere. Now it's his seven-week-old son's lullaby.

"He can be crying and wailing but as soon as I start that song he stops crying," says Mr. Pacheco, 36. He bought two copies of this week's new album, Magic, one of which he's saving in his son's keepsake box.

Many fans say it's the live Springsteen shows that inspire near-religious devotion. Anyone who's gone to fewer than 20 concerts is still a newbie in some circles.

Karen Graham, 42, of Montreal, says every one of the more than 30 concerts she has seen was different. "There's always an 'Oh my God!' moment," she says. "It's like your favourite movie: You can see it over and over and you don't get bored."

Ms. Graham, who works at a brokerage firm, likens her love of Mr. Springsteen to an addiction - but a good one. "After a concert I feel high and I want to see another show as soon as possible," she says.

And in a world where it's increasingly difficult to separate the real from the fake, Mr. Springsteen has maintained his authenticity, even as the working-class hero became a multimillionaire.

"They say you should never meet your hero, but with him that's not true," says Ms. Graham, who got his autograph - which she turned into a shoulder tattoo - through the fence at a private airport in Buffalo. "He's not a prima donna. Meeting him made me love him even more."

As the ultimate American icon, Mr. Springsteen may seem an unlikely Canadian idol. But as his worldwide sales demonstrate, the Boss's appeal is international.

And although he doesn't tour in Canada often, fans here take pride in going the extra mile - or thousand miles.

"You probably have to work a little bit harder to be a fan," says superfan Humphrey Kadaner, 48, who, as a university student, was nearly arrested once for trying to sell an extra ticket. He got off with a warning, and more importantly, he didn't miss the show.

Now the president of HMV Canada, Mr. Kadaner is putting his money where his mouth is: Anyone who buys Magic from HMV and doesn't like it will get their money back and a letter of apology.

Mr. Kadaner has seen 84 shows - which sounds more reasonable when you consider that that's over 30 years, he hastens to add.

"I believe some would suggest I am nuts," Mr. Kadaner says. But like so many Springsteen fans, when the lights go down and the Boss runs onto the stage, he just won't care.