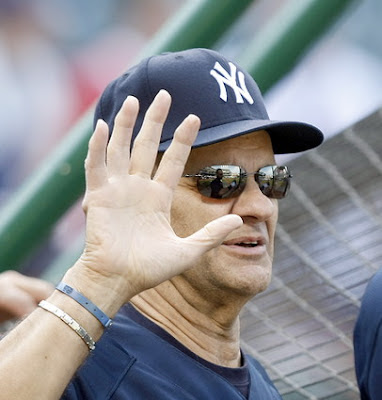 Joe Torre hangs around the cage during batting practice before Game 2.

If there was any doubt that George Steinbrenner is still in control of the Yankees, and still capable of an '80s-era firing, they were dashed by The Boss' thinly veiled threat directed at Joe Torre. This was the old Boss, all right, targeting the manager and his $7 million annual salary, poised to dismiss Torre if the Yankees get bounced from the playoffs tonight by the Indians.

When Steinbrenner told The Record on Saturday night, "[Torre's] job is on the line," he couldn't have been more direct. Torre has no contract for 2008 and club sources say Steinbrenner has been itching all summer for a reason to hire someone else. A change was almost made in May, when the Yankees fell 14½ games behind the Red Sox, but the Bombers' second-half rebirth forced Steinbrenner and Torre's Tampa-based critics into the background.

But now the Bombers are in crisis, down 0-2 in the AL Division Series and on the brink of yet another first-round exit from the playoffs. If Roger Clemens doesn't win Game 3, Torre will lose whatever equity he had with The Boss. Forget the 12 straight postseason appearances, forget Torre's strong support in the clubhouse or that Torre's Yankees outperformed Willie Randolph's Mets down the stretch.

None of that will matter to Steinbrenner, who is equating Torre's salary with a greater return on his investment. The owner told The Record: "I think we're paying [Torre] a lot of money. He's the highest-paid manager in baseball, so I don't think we'd take him back if we don't win this series."

Needless to say, Torre is counting on Clemens to pitch the game of his life, and not just to save his job. The Yankees are in a state of shock after back-to-back losses at Jacobs Field. The American League's most prestigious offense has been invisible in the past 15 innings, scoring just one run, no match for C.C. Sabathia and Fausto Carmona in Games 1 and 2.

No one symbolizes the Yankees' futility more than Alex Rodriguez. Coming off one of the greatest regular-season performances of the last 50 years, A-Rod hasn't even gotten the ball out of the infield in the ALDS, much less registered a hit. For all the April-through-September momentum A-Rod generated, leading the major leagues in home runs and RBI, he's spiraled downward at the worst possible time.

After going 0-for-4 against Carmona on Friday night, including three strikeouts, the third baseman is now 3-for-38 in the playoffs during the last three years. In his last 15 postseason games, Rodriguez is 4-for-50, and hasn't had an RBI in his last 65 postseason plate appearances.

Torre has rallied to A-Rod's defense, saying, "You can't put it all on him." But the manager knows something's wrong. He called off Saturday's scheduled workout at the Stadium, choosing to let the Yankees rest before resuming the series as the overwhelming underdogs. Torre also is considering shaking up his lineup, specifically replacing the slumping Hideki Matsui with Jason Giambi.

Still, if the Yankees (and Torre) are to keep breathing in October, they'll need A-Rod in a hurry. Everyone senses the urgency, including Doug Mientkiewicz, Rodriguez's closest friend on the team. The first baseman, who was a high school teammate of A-Rod's, spent the day texting his buddy, urging him to relax and arrive at the Stadium today with a fresh perspective.

"I believe in [A-Rod] probably more than anybody else outside of his family," Mientkiewicz told reporters on Saturday. "So I've seen him do it before. He'll do it again. We've just got to keep plugging along and get him in situations to where, you know, they have to come right at him. I said that before, but I believe in him.

"He's going to come through, I promise."

No one can make quite the same guarantee on Torre's behalf. Clearly, Joe knew he was in trouble even before the Yankees set foot in the postseason. During the final week of the regular season, when the Yankees were in Tampa, Torre and The Boss met for a working lunch. The two chatted neutrally about the Bombers' second-half surge, discussed the lineup and otherwise filled in the gaps with corporate small talk.

But not once did Steinbrenner mention Torre's contract, nor did the manager ask for a vote of confidence. Torre walked away from the meal no more certain of his future than when he began the season. Despite the skillful manner in which Torre rescued the Yankees from collapse, Steinbrenner refused to commit to him for 2008 -- prompting one high-ranking executive to say, "Joe's neck is still on the line."

That dark assessment is now a reality. Steinbrenner is planning to be at the Stadium tonight, perhaps thinking his presence will inspire the Yankees. But Torre knows it goes deeper than that. If the Yankees expire prematurely yet again, Steinbrenner wants to see it firsthand, as if to collect enough damning data to make the change he apparently craves.

Who would replace Torre? The guess list includes Joe Girardi and Don Mattingly, for starters. And don't discount Bobby Valentine as a dark horse. Steinbrenner thinks the Yankees have gone soft since 2000 and thinks the answer is a louder, more volatile manager. Valentine, whose contract with the Chiba Lotte Marines is expiring this season, just must tempt The Boss. In this crazy Yankee universe, crazier things have happened.