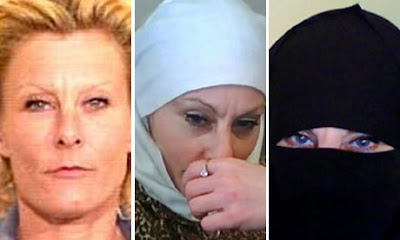 Three images of Colleen LaRose, including a police mugshot (left). LaRose called herself Jihad Jane and has been indicted for aiding terrorists.

An American woman who called herself Jihad Jane has been charged over an alleged plot to murder a Swedish man.

Irish police yesterday arrested seven people over an apparent plot to kill Lars Vilks, a Swedish cartoonist who had a bounty put on his head after depicting the prophet Mohammed with the body of a dog – though Vilks has not been named as LaRose's alleged target.

Garda sources said the four men and three women were in their mid-20s to late-40s. Some of them arrested hold Irish citizenship and some are from the Middle East. Converts to Islam were among them, the Irish police said.

The US justice department declined to comment on whether the two cases were connected.

David Kris, the head of the department's national security division, said: "The indictment, which alleges that a woman from suburban America agreed to carry out murder overseas and to provide material support to terrorists, underscores the evolving nature of the threat we face."

LaRose, who also called herself Fatima LaRose online, allegedly posted a comment on YouTube in June 2008 saying she wanted to help "the suffering Muslim people".

According to the indictment filed in a federal court in Pennsylvania she sent emails to unnamed co-conspirators offering to become a martyr as well as to use her American background to avoid detection.

The indictment accuses LaRose of agreeing in March 2009 to marry a co-conspirator from a south Asian country who was trying to obtain residency in Europe. He is alleged to have urged her to go to Sweden, find the unnamed Swedish man "and kill him". The indictment claims she tried to raise money over the internet, lure others to her cause and lied to FBI investigators.

LaRose was arrested after returning to the US in October 2009 on a charge related to the theft of a US passport, according to court documents.
If convicted on the four counts in the indictment, which was dated 4 March 2010, LaRose could face a sentence of life in prison and a fine of $1m (£670,000).

Michael Levy, the US attorney in Pennsylvania, said the case showed that terrorists were looking for Americans to join their cause. "It shatters any lingering thought that we can spot a terrorist based on appearance."
The Obama administration has grown increasingly worried about Americans and foreigners living in the US taking up the cause of anti-American militants.

Two recent cases have fuelled those concerns: the arrest of a Chicago man accused of helping plot the 2008 Mumbai attacks and an Afghan immigrant living in Colorado who pleaded guilty to plotting a bomb attack on the New York subway system.