Is this why the Palestinians 'deserve' a state, Mr Biden? 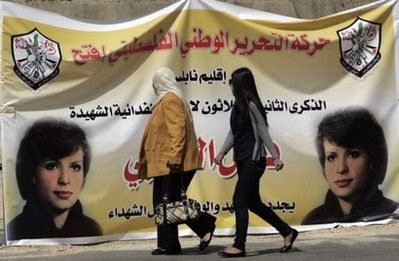 Palestinian women walk past a banner in the West Bank town of Bireh, featuring Fatah member Dalal Mughrabi who led an attack on an Israeli bus near Tel Aviv, killing 36 people in 1978, on the anniversary of the attack. Israeli Defence Minister Ehud Barak has ordered the army to seal off the West Bank for 48 hours until midnight on Saturday, an army spokesman said.(AFP/Abbas Momani)


The New York Times reports that the Palestinian Authority and Fatah have dedicated a public square to the memory of a woman who in 1978 helped carry out the deadliest terrorist attack in Israel’s history:

The woman being honored, Dalal Mughrabi, was the 19-year-old leader of a Palestinian squad that sailed from Lebanon and landed on a beach between Haifa and Tel Aviv. They killed an American photojournalist, hijacked a bus and commandeered another, embarking on a bloody rampage that left 38 Israeli civilians dead, 13 of them children, according to official Israeli figures. Ms. Mughrabi and several other attackers were killed.

To Israelis, hailing Ms. Mughrabi as a heroine and a martyr is an act that glorifies terrorism. But, underscoring the chasm between Israeli and Palestinian perceptions, the Fatah representatives described Ms. Mughrabi as a courageous fighter who held a proud place in Palestinian history. Defiant, they insisted that they would not let Israel dictate the names of Palestinian streets and squares.

‘We are all Dalal Mughrabi,’ declared Tawfiq Tirawi, a member of the Fatah Central Committee, the party’s main decision-making body, who came to join the students. ‘For us she is not a terrorist’, he said, but rather ‘a fighter who fought for the liberation of her own land.’

Note in particular the last three words. This man is talking about Israel: not the West Bank, not Gaza, but Israel. It was, of course, not her land and never was, not at any time throughout history; nor were the West Bank or Gaza. The only people for whom this ever constituted their national homeland were the Jews. But it is that land, Israel, a state that was actually established by international agreement, that Fatah wants. In other words, it wants Israel destroyed: and that is the one and only cause of this conflict. This is not a boundary dispute. Fatah wants Israel destroyed – as its leaders have said over and over again down the years.

Fatah is led by Mahmoud Abbas, the Palestinian ‘President ‘and head of the Palestinian Authority. The PA stood on the sidelines at this disgusting ceremony, tattempting to minimise both their involvement and the significance of this commemoration. A PA security official who was there, General Adnan Damiri, tried to distance himself from Mughrabi's aims by claiming that

the Palestinians were ‘seeking peace’ based on a state in the territories occupied by Israel in 1967.

Of course this is not true. Were it really the case, they could have had a state of their own on the numerous occasions it has been offered to them over the past seven decades. What they really want is reflected rather more accurately in the words of Tawfiq Tirawi. The brutal reality is that the PA, led by Abbas, treats as a heroine a terrorist who murdered 38 Israeli civilians and thirteen children along with an American to further the aim of the destruction of Israel. No wonder the PA put off this ceremony until Joe Biden had gone back to the US.

Even though Biden's blushes were spared, however,the fact remains that the US and the west, which waxed apoplectic over Israel’s building new homes in east Jerusalem -- even though this was in fact expressly acknowledged as acceptable in previous agreements – believe that Abbas and Fatah are ‘moderates’ who ‘deserve’ a state of their own which they intend to force Israel to give them. But in naming this square after their ‘martyr’ and ‘heroine’ Dalal Mughrabi, the ‘moderate’ Palestinian leadership have demonstrated once again both their own true murderous character -- and the gullibility or worse of America and western nations, which are remorselessly bullying Israel into offering its throat to such enemies.