The Hall of Fame defensive lineman — and, later, TV star — is remembered as even more impressive off the field. 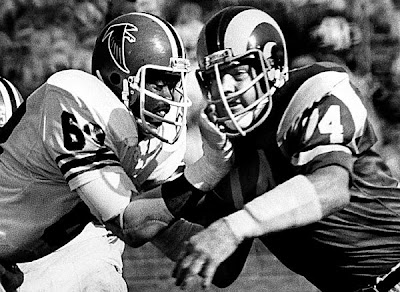 Olsen, who played defensive tackle, battles Atlanta Falcons guard Gregg Kindle during Olsen's final season in the NFL. The Rams won the game, 59-0, and took the division championship, but they fell short of the Super Bowl, losing to the Minnesota Vikings in the playoffs. (Associated Press / December 4, 1976)

Merlin Olsen left quite an impression, even on his first day with the Los Angeles Rams.

Jack Teele remembers it well. It was the summer of 1962, just before the start of training camp. Teele was the team's director of public relations and, because everyone else had the weekend off, was the Rams' highest-ranking official at the Chapman College facility.

Olsen arrived on a Saturday night with the other prized rookie, quarterback Roman Gabriel. (Gabriel had been the second player selected in the NFL draft, Olsen the third.) Teele called general manager Elroy Hirsch to give him an update.

"I told him Gabe was a little shy, and imposing physically," Teele recalled. "And about Merlin I said, ‘Elroy, if you don't get back here in 48 hours, we've got a new GM.'

"It was almost an aura he had about him, a self-assuredness. He was always in control."

Olsen, a Hall of Fame defensive lineman remembered as even more impressive off the field, died Thursday after battling mesothelioma, a rare form of cancer. The tackle, a fixture in the Rams' Fearsome Foursome defensive front, was 69.

Olsen's gentle charisma — later known to millions in his career as a broadcaster and as an actor on "Little House on the Prairie" and "Father Murphy" — was in stark contrast to his ferocity as a player. He played one of the meanest positions in football and did it better than just about anyone who ever tried, earning an unmatched 14 consecutive Pro Bowl invitations.

"He was a man among men on the field," said Rayfield Wright, a Hall of Fame offensive tackle for the Dallas Cowboys, who typically lined up against Fearsome Foursome stalwart Deacon Jones when facing the Rams.

Occasionally during the course of a game, Wright would be the pulling tackle assigned to block Olsen, and that was always a memorable challenge.

"He was a force in that middle, no question about it," Wright said. "When you look at that Fearsome Foursome, those guys were playing at around 270 but still had the quickness and finesse. Merlin Olsen held that nose like no other tackle in the game. He got a lot of respect."

Steve Sabol, president of NFL Films, counts Olsen among the three best defensive tackles in history, along with Pittsburgh's "Mean" Joe Greene and Dallas' Bob Lilly. Moreover, Sabol says Olsen and Reggie White were the game's best bull rushers, rolling through and over blockers in their path.

"They could just grab a guy straight on and push him right back," Sabol said. "When you watched them, you were really watching the essence of what line play was. And Merlin did that for 60 minutes. He was the kind of guy who was stronger at the end of the game than he was at the beginning.

"In one memorable highlight package featuring the Rams and Chargers, the late John Facenda intoned that Olsen "went through the offensive line of the San Diego Chargers like a storm surge through a sand castle."

Olsen was also a very disciplined player — so much so that Jones called him "The Eraser" because his consistency erased the deficiencies of the teammates around him. Jones and others could be more reckless because they knew Olsen could make the play if they missed it.Reached at home Thursday, Jones said he'd be happy to talk about Olsen on any other day but that doing so right away was too painful.

Jack Youngblood, another Rams star in the Hall of Fame, said he never would have enjoyed that type of success but for Olsen. The two played together from 1971-76.

"Not only did he mentor me from the standpoint of the game, but the intellectual part of it and the character aspect of it," Youngblood said. "He made you think about why we played this game. Was it just about a bunch of guys playing ball, or could we be something more?"

Like Teele, who was so taken with Olsen's maturity and poise that he instantly saw GM qualities in him, just about everyone who knew Olsen well said football was just one of his many skills. He was much more than a giant in a No. 74 jersey.

"In many ways, he was a big man with a tender soul," Sabol said. "There was a decency and professionalism. He was the most considerate, the most thoughtful, the most courteous player that I ever met. I never met another player like that.

"But when he got on the field, he could put on his intensity as if it were a chin strap. He could just change from this Father Murphy kind of person into one of the most relentless, dogged, determined defensive linemen in history."