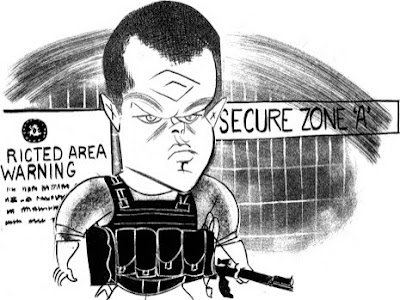 The fact that “Green Zone” begins with a bombing raid should come as no surprise, given that the director is Paul Greengrass. He made two of the “Bourne” films and “United 93,” and his attitude to the average viewer remains that of a salad spinner toward a lettuce leaf. You don’t so much watch a Greengrass film as cling on tight and pray. The zone of the title is the enclave from within which the Coalition Provisional Authority tried to govern Iraq after the war, in 2003, and our hero is Chief Warrant Officer Roy Miller (Matt Damon). Boy, is he a hero: fit, pensive, rough when required, and so unceasingly moral that, on entering the hotel room of a blond, unaccompanied American reporter named Lawrie Dayne (Amy Ryan), he engages her in a constructive discussion of journalistic sources and then—I can still hardly believe this—he leaves. No shock, no awe, no combat-calming sex. All he wants is truth. Miller heads a unit that, in the wake of the invasion, is told to seek out weapons of mass destruction; with hindsight, we realize that he might have had more success looking for live unicorns, but there you go.

As one search after another comes up empty, Miller confides his doubts to senior officers, who don’t want to know. As for Clark Poundstone (Greg Kinnear), an intelligence agent for the Pentagon (you’d never guess he was the bad guy, would you?), he treats any skepticism as unpatriotic. The only one who listens to Miller is Martin Brown (Brendan Gleeson), a bearish C.I.A. staffer who actually has a grasp of the region—or, in the words of the sneering Poundstone, “a lot of preconceived ideas.” Miller is seconded to Brown (the film is hazy on military-command structures), and told to bring in General al Rawi (Igal Naor), a senior Iraqi who could hold a clue to the elusive weapons. You may not buy all this, but then most of Greengrass’s audience will be neither scholars of Iraqi politics nor conspiracy theorists with damp palms and narrowed eyes; they will be natural Bourne lovers, who want the camera to start shaking and grooving in the first minute and never stop.

They have their wish. From the echoing factory that Miller scours in his first scene to the climactic wasteland through which he, his interpreter (Khalid Abdalla), and the bullish Briggs (Jason Isaacs), from Special Forces, prowl after dark—all, for different reasons, in pursuit of al Rawi—“Green Zone” approaches every human activity as if preparing to defibrillate. The wasteland is filmed on the run, under the grainy murk that you get from night-vision goggles. Nowhere is stillness permitted; even when Miller, safe in his room, Googles the reporter’s name, we are yanked into closeups of the relevant words on his screen. As for John Powell’s score, insanely drum-heavy, it reminds me of the islanders in “King Kong,” summoning their favorite ape, and Greengrass is happy to unleash the beat for something as uneventful as a passing convoy of vehicles—the plan being, of course, to make us believe that there is an event coming, probably of the incendiary kind.

This pathological wish to thrill delivers diminishing returns. It gave better value in the Bourne films, which, for all their low moods, were fired by basic fantasy, whereas the excitements of “Green Zone” sit uneasily with its examination of the real and recent past. The credits say that it was inspired by “Imperial Life in the Emerald City,” Rajiv Chandrasekaran’s nonfictional account of life within—and beyond—the Green Zone, but the book’s task was to unearth a fiasco, its comedy so black and dense that you could pump it out of the ground. Many filmmakers would have leaped at the textural contrast between life on the street and the sheen of unreality inside what Chandrasekaran calls Baghdad’s Little America, but Greengrass is too caught up in the hero’s quest to notice. What lends the film its grip and its haste is also what makes it unsatisfactory, since the end result of Miller’s hectic hunt is to “solve” the puzzle of W.M.D. “If you pull this off, you might just save the country,” Brown tells him, but that is a fantasy more lurid than anything in the Bourne franchise. One of the charges against the Bush Administration was that it sought to encase Iraq in a narrative far too naïve and restrictive for any nation to bear; and, in its small way, “Green Zone,” a left-wing movie that looks and sounds like a right-wing one, suffers from the same delusion. The story of American involvement, in the eyes of this film, is neither a monstrous folly nor a patient, difficult path to democratic peace. It’s a wrap.
Posted by jtf at 11:41 AM