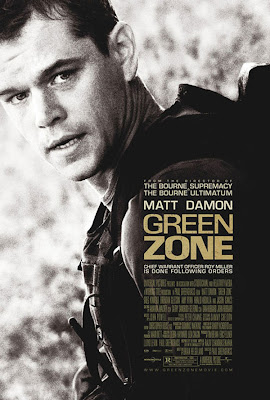 After all of Hollywood's Iraq movies have flopped (even the Oscar-garlanded "The Hurt Locker" earned only $15 million at the box office), one studio thinks it has the following secret to success: The previous films didn't insult the United States enough.

"Green Zone," opening Friday, is a $100 million slime job that conjures up a fantastically distorted leftist version of the war and wraps it around a frantic but preposterous action picture. (Spoilers about the plot follow.)

Matt Damon plays Miller, an Army "chief" (chief warrant officer) assigned to searching for weapons of mass destruction in Baghdad in the opening days of the war in 2003.

The preposterous part comes in almost immediately: After Chief Miller comes up dry a couple of times, he decides to launch a one-man internal-affairs investigation into US intelligence-gathering.

He bypasses his chain of command, endangers good men (when one of his soldiers asks why he's following a random Iraqi into what could well be an ambush, Miller snaps, "Put your game face on") and forges a secret alliance against his fellow soldiers with a Baghdad CIA officer (Brendan Gleeson).

Despite being guilty of gross insubordination, lying to his superiors and concealing important evidence from them (a notebook containing the addresses of Saddam's top officers), Miller is the hero of the film.

Others we're supposed to cheer for include Sunni officers who shoot down helicopters carrying American soldiers sent to assassinate them. Those death squads are acting at the behest of a duplicitous Pentagon intelligence mandarin (Greg Kinnear) who has single-handedly drummed up a fake casus belli.

Before the war, he interviewed a general of Saddam's who told him pointedly that there were no WMDs in Iraq after 1991 but that he'd be willing to work with the Americans after Saddam was deposed. The Kinnear figure then lied to a gullible reporter (Amy Ryan) that he had a rock-solid source, "Magellan," who had given him proof of WMDs in Iraq.

Such is this movie's eagerness to turn reality upside down that, although the Ryan character is obviously based on Judith Miller of The New York Times, the reporter is said to work for the Wall Street Journal. In full-on liberal daydream mode, Damon and his friends can pretend their favorite lefty paper is untainted by flawed reporting.

To cover his tracks from Chief Miller, the Pentagon official sends out a goon squad to assassinate the Sunni general -- who, according to the movie, is also the sole figure responsible for whether Iraq will erupt into an insurgency.

Even for Hollywood, "Green Zone" is dumbfoundingly brazen in its effort to rewrite the facts. As any reasonably informed person knows, many intelligence services (including the French, German, Chinese, Russian and British) believed Iraq had WMDs. And the CIA (which along with Chief Miller is a hero of "Green Zone") was among them. Plus, such intel reports predated the Bush administration -- and Saddam's refusal to allow the UN weapons inspectors to finish their work gave us every reason to think he was hiding something and sealed his fate.

It's one thing to make a fantasy film laced with snarky jibes at the United States and its military. It's of another order entirely for an American studio (Universal, a unit of GE) to perpetrate, during an ongoing war, such vicious anti-American lies disguised as cheap entertainment.

"Green Zone" tells US troops that all of their efforts have been based on a deliberate deception. Worse, it blames the insurgency that has killed so many of our fighting men and women on US treachery.

Movies like "In the Valley of Elah," "Rendition" and "Redacted" have shown US forces doing nasty things -- but none went anywhere near as far as this picture in suggesting original sin corrupted the entire Iraq war and that American officials are more blameworthy than the insurgents for the most violent years.

"Green Zone" isn't cinema. It's slander. It will go down in history as one of the most egregiously anti-American movies ever released by a major studio.

Kyle.Smith@nypost.com
Posted by jtf at 2:03 PM