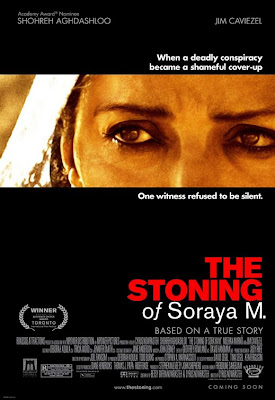 The 2010 Oscar ceremonies have come and gone without a word spoken about “The Stoning of Soraya M.” The searing drama, based on true events, follows the torture of an innocent Iranian woman charged with adultery. It’s the kind of message movie Hollywood doesn’t much care for, stories showcasing horrors that can’t be directly blamed on western culture.

But the drama, released today on DVD and Blu-ray, deserved a smattering of Oscar buzz all the same. What other movies bring the issue of Sharia law to light in such fashion? More importantly, why didn‘t Shohreh Aghdashloo’s blistering performance earn her a place in the Best Actress category?

“Stoning,” directed and co-written by “The Path to 9/11” screenwriter Cyrus Nowrasteh, takes us to a remote Iranian village under the thumb of Sharia law. Young, attractive Soraya (Mozhan Marno) is raising four children with little help from her husband, Ali (Navid Negahban). When Ali decides he’d rather be married to a 14-year-old Iranian girl, he tries to pressure Soraya into granting him a divorce.

When she refuses, Ali accuses her of sleeping with a villager for whom she provides housekeeping duties.

She’s clearly innocent, but Ali is able to muster enough manufactured evidence to reinforce his case. What follows is a harrowing march to the titular stoning, an unblinking vision of a culture which subjugates women and human decency.

What sets “Stoning” apart is the detail Nowrashteh brings to the narrative. The villagers aren’t caricatures save for the villainous Ali, and we get to see the smaller moments of the village come alive.

The stoning itself is a horror movie more frightening than “Saw” or “Hostel.” It’s difficult to watch, but the director clearly wants people to understand the ramifications of cultural rot.

The film’s framing device delivers some clunky exchanges, but the sheer power of “The Stoning of Soraya M.” cannot be denied.

The Blu-ray extras include a three-part documentary detailing how “Stoning” came to be. The featurette could use some editing, but it’s noteworthy for showing a film director lose his cool on the set. Most DVD extras are simply glib shout-outs to the product in question.

The extras also detail the balancing act the crew accomplished in dealing with untrained movie extras and physical hardships which made each day of shooting a struggle.

Nowrasteh, an Iranian-American himself, says he insisted on casting Iranian actors in the main roles as a way to honor the country.

The modestly budgeted film suffered from on-set language barriers, a remote location with limited transportation access and having to stop production five times a day to allow for prayers.

“The surrounding craziness helped the movie,” Nowrasteh says. “It gave an air of reality to everything. This was not make believe.”

Betsy Giffen Nowrasteh, the director’s wife and “Stoning’s” co-screenwriter, says the film was meant to honor real women, like Soraya, who suffer at the hands of cruel cultural traditions.

“We’re trying to illuminate something that isn’t talked about enough,“ she says.


“The Stoning of Soraya M.” Out on DVD 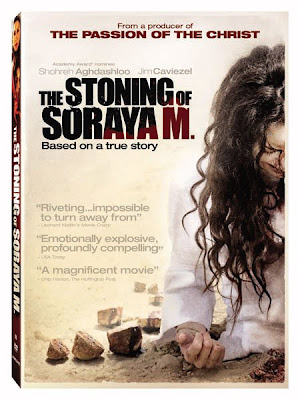 Following on the heels of the recent International Women’s Day comes the DVD release of the remarkable and unforgettable film The Stoning of Soraya M. Based on the true story of a woman falsely accused of infidelity and stoned to death for it under Iran’s post-Islamic Revolution Khomeini regime, Soraya stands as condemnation of a barbaric punishment that, astoundingly, continues there today.

Soraya justifiably made numerous critics’ top ten 2009 film lists (including those of NRB’s David Swindle and Chris Yogerst - and reviewed here by Yogerst) and racked up a raft of awards, including, most recently, the NAACP Image Award for Best Foreign Motion Picture. And now it is becoming an underground hit and an inspiration in a country on the verge of a new revolution.

Not that this has inspired a feminist change of heart among Iran’s Islamofascist authorities. In ironic and brazen confirmation of their contempt for women’s rights, they have prevented Simin Behbahani, a prominent female poet and activist known as “the lioness of Iran“, from traveling to Paris to attend an event celebrating International Women’s Day.

Despite illness and advanced age (she is in her 80s), Behbahani nonetheless felt compelled to go to Paris because:

my passion and commitment to my country’s women… pushed me to take part in this ceremony to read a poem and talk about feminism.

Unfortunately for her and her country’s women, the clerics in Iran have a tad more passion and commitment to raging misogyny than to poetry and open discussions of feminism – a misogyny they justify by claiming that Iranian women are treated better and more respected than their Western counterparts, who are all reduced to being prostitutes, Hooters waitresses, or extras on Entourage.

Except that the Iranian authorities don’t so much place women on a pedestal as they do bury them in a pit and pulverize them with stones, like Soraya M., or rape and execute them to punish dissent, or haul them into jail for indecent Western hairstyles. I doubt that even the most under-tipped Hooters employee would want to trade in her Western sexual oppression for that kind of respect.

So don’t count on Iran making International Women’s Day a national holiday, as it is in such feminist Shangri-Las as China and Russia, anytime soon. For the time being, The Stoning of Soraya M. sits on Iran’s banned films list, and Ms. Behbahani sits on Iran’s no-fly-to-feminist-conferences list. But both stand, in their own way, as proud testaments against an Islamic regime that bears a positively medieval hatred toward women.

Click here to purchase “The Stoning of Soraya M.” now available on DVD and Blu-Ray.
Posted by jtf at 2:13 PM