Joining with groups like ACORN, a wide coalition of Religious Left groups will march on Washington, D.C. on March 21 on behalf of eventual amnesty and largely open borders under the rubric of Comprehensive Immigration Reform (CIR). The National Council of Churches (NCC) is even hailing CIR as a “divine mandate” and a “patriotic act.”

At least the NCC is acknowledging patriotism is a virtue of sorts. New York Democratic Senator Chuck Schumer is touting CIR, but no one believes it legislatively stands any chance in this year’s U.S. Congress. Maybe the Religious Left is praying for a divine miracle to enact its dream of a borderless America. The rally is titled “March For America: Change Takes Courage and Faith.” Once again, the Religious Left is exploiting “faith” to advance and echo the secular Left’s hard core agenda. Its irate activists will gather on the U.S. Capitol’s West Lawn to insist that God opposes well regulated borders for the U.S. 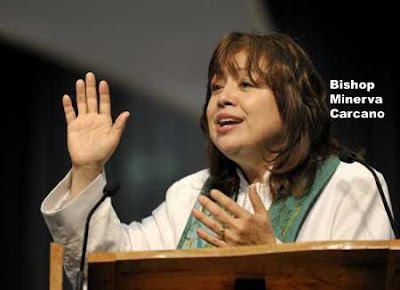 “We hope to show the moral urgency of repairing America’s broken immigration system,” explained an immigration spokesman for the National Council of Churches and its relief arm, Church World Service. “It will be demonstrated in a dramatic display of unity among supporters of comprehensive immigration reform – people of faith, immigrant rights groups, labor groups, and others from all across the United States.” Reputedly, church immigration activists have already been “hosting prayer vigils and potluck suppers and meeting with members of Congress in their home districts for months,” laying the spiritual and political groundwork for the March 21 march on Washington. “”Help us keep this momentum by joining us for this great action in Washington,” he further implored.

United Methodist, Episcopal, and Presbyterian agencies, the National Council of Churches, Jim Wallis Sojourners types, the National Association of Evangelicals (NAE), and left-wing Catholic orders are endorsing the march. Phoenix United Methodist Bishop Minerva Carcano will provide oratory to help to rev up the marchers, as will Sharon Watkins, President of the Christian Church (Disciples of Christ). “The event is expected to draw a crowd of 100,000 or more, including many evangelicals who have been inspired by the NAE’s resolution on immigration,” boasted the NAE’s website. “This is a critical moment in the struggle for immigration reform this year.”

But the march’s co-sponsor is the decidedly less religious “Reform Immigration for America,” whose members include ACORN, CodePink, National Council of LaRaza, National Gay and Lesbian Task Force, and People for the American Way, among many others, including labor groups, like the AFL-CIO. Plus, of course, the Council on American Islamic Relations and Muslim Public Affairs Council are signed on. The church groups are specifically urging support for Illinois Democratic Congressman Rep. Luis Gutierrez’s Comprehensive Immigration Reform for America’s Security and Prosperity Act.

In their further attempt to camouflage a liberalized immigration political stance as a religious imperative, the National Council of Churches is asking its 35 member denominations to exploit the Christian pre-Easter season of Lent to mobilize for the Gutierrez CIR legislation. This exploitation of a traditional time of prayer and self-denial, in memory of Christ’s suffering, for fairly crass political purposes is not new for the NCC. Infamously, the NCC similarly exploited Lent in 1995 to rally churches against the new Republican Congress’ “Contract with America,” which of course the NCC saw as an assault on the Gospel. The NCC even asked churches to display purple ribbons during Holy Week in solidarity with Clinton Administration resistance.

This time, in a February 2010 letter from the NCC’s General Secretary, and other liberal prelates, including the Episcopal Church’s Presiding Bishop, the Religious Leftists are citing Lent as the perfect season for immigration lobbying. “As Christian leaders, we write to you on the eve of our shared Lenten journey about an issue of urgent concern to all of us in this nation: Comprehensive Immigration Reform.” They complain that “12 million immigrants living in the United States find themselves without the hope of becoming citizens, reuniting with family members or enjoying the legal protections that most of us take for granted,” without specifically admitting that these persons entered the U.S. illegally. The NCC warned: “Unless there are major policy changes enacted by the U.S. Congress, many of these people will continue to languish in the shadows and be subjected to abuse, discrimination and hardships that are contrary to the Gospel values of love, unity and the affirmation of the dignity of all people.”

According to the NCC et. al., lobbying for CIR reminds is that “our interrelatedness and interdependence with every child of God, and are called not only to come to the aid of one another, but are commanded to rise to support those who are marginalized in our society.” Apparently God’s support for CIR is very clear. “In response to this divine mandate, and as a patriotic act in the spirit of our nation’s best values and traditions, we join together with our brothers and sisters from the U.S. Conference of Catholic Bishops, National Association of Evangelicals, National Hispanic Leadership Conference and millions of other people of faith throughout the country in calling for comprehensive immigration reform that will improve and protect the lives of millions of people, in accordance with the U.S. Constitution and international agreements.”

Of course, the NCC and crowd are unclear, or unconcerned, about how liberalized immigration and eventual amnesty will affect America’s unemployed, how it will affect millions of legal immigrants, how it will affect overall law enforcement, how it will affect countless millions overseas who endure persecution or greater poverty than most Mexican or Central American illegals but lack the ability to walk across the border, and how a virtually open border only undermines attempts at economic and political reforms south of America’s borders.

Most important, neither traditional Christian nor Jewish teaching specifically offers a political immigration policy. Divine commands for fairness and justice do not automatically equal liberalized immigration, any more than they equate to socialized medicine, global warming alarmism, or American disarmament. But the Religious Left, uncomfortable with the theology and moral teachings of its own traditions, prefers the supposed clarity and liberation of left-wing activism.
Posted by jtf at 8:11 AM