As the 82nd annual Academy Awards rolled into their third hour, I started joking on our live blog about how the winners and presenters were so well behaved they were leaving me nothing to write about. In fact, it’s just the opposite. How many Hollywood Behaved Badly pieces can one man write in a lifetime? Well, it’s probably my destiny to find out, but what a pleasant surprise not to have to write one this morning. 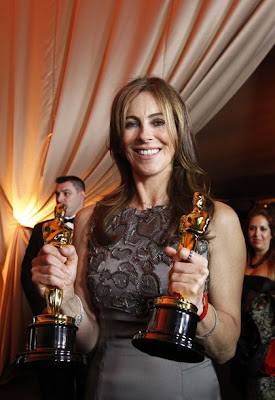 Director Kathryn Bigelow poses with her Oscars for best director and best film for "The Hurt Locker" at the 82nd Academy Awards in Hollywood, March 7, 2010. (Reuters)

Last night, no one said anything insulting or divisive. Not a word. Not a sound. Not a peep. The whole of the Kodak Theatre offered a brief but completely unexpected respite in their ongoing Culture War against traditional America and chose instead to behave like, well, movie stars.

No idiocy directed our way in the form of poorly disguised jokes or irony, no hey-hey goodbye shots at Bush, no gushy shout-outs to Obama. With ObamaCare on the precipice there wasn’t even a lone moralizing salvo fired on its behalf or a cheap shot launched towards the Tea Parties, Sarah Palin, or Fox News. It was like someone gave a magic wand to those of us who want to like Hollywood again, and it worked. Because this is how it’s supposed to be.

For the first time in fifteen years – who knows how long, really – Hollywood showed some class; some real old-fashioned Movie Star Class. The question is, why? These are the same people who have been lashing out at us for as long as they’ve had the opportunity. Was there a memo? An act of God? A universal acknowledgement that it was time to rehabilitate their image with the large swath of potential customers this industry has worked so hard to relentlessly antagonize and insult?

Whatever the reason, let’s hope we saw the beginning of something. And let’s also hope for some kind of mass realization of the benefits that came from eliminating the smug aren’t we important speeches and the sanctimonious politicking and elitist hectoring that have become so predictable. None of this ever accomplished anything other than to hurt the aforementioned cause, turn “Hollywood” into a punchline, and further distance a once universally beloved town from their audience — an audience that asks only to be taken aways for a few hours of ooh-ahh glamor one night a year. And last night it felt almost as though someone in charge had figured that out. 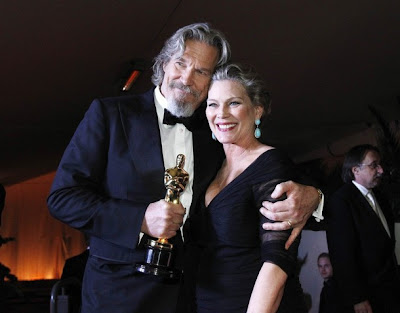 This isn’t to say the show was good, (no one has that big of a magic wand), but Steve Martin and Alec Baldwin were charming, self-deprecating, and had some great moments. Best of all were the rarities –actors who have managed to hold on to audience goodwill — taking home well-deserved trophies. After all, not only was it a night that gave us Jeff Bridges and Sandra Bullock to root for, they also won!

And James Cameron did not.

Nope, the man who should now be forever known as the ex-Mr. Bigelow never left his chair nor got near a microphone. Sure, “Avatar” earned a few technical awards but when it came to kudos for any category in a storytelling department, it was the King of the World forced to sit in his seat and look up at his betters. My issues with “The Hurt Locker” are well documented and “Up” was the best picture of the year by a very wide margin, but how nice it was to see director Katheryn Bigelow and screenwriter Mark Boal offer sincere appreciations to the American Military as the man who so cruelly smeared them (in neato 3-D!) and tried to marginalize Bigelow’s win as something having to do with history as opposed to her enormous talent, didn’t even rate a reaction shot.

And it can only mean good things for movie lovers now that the once woefully under-appreciated Bigelow has finally reached the top-tier of Hollywood directors where she has always belonged. She’s not a female director, she’s a one-of-a-kind awesome director.

Last night a woman who played a gun-totin’, Southern Christian conservative won Best Actress, a film widely perceived as pro-troop won Best Picture, a tune with a twang won Best Song and for nearly four hours all of Hollywood presented themselves in the best way possible. Was it a temporary blip in the Matrix, a crack in the ideological door, or some kind of insidious left-wing plot to force me to get a real job?

Time will tell. But when the most off-putting part of an Oscar ceremony is the interpretive dance, something’s going on.
Posted by jtf at 5:00 PM