By popular demand, SteynOnline is launching a weekend movie column, picking out a pertinent picture or two from the last century or thereabouts that you might prefer to a trip to the multiplex. Just ahead of St Patrick's Day, here's Liam Neeson in the 1996 biopic of the Irish nationalist Michael Collins, the original IRA's director of intelligence and a member of the Irish delegation at the Treaty talks in London in 1921. (My great-uncle was lawyer to the leader of the delegation, Arthur Griffith.) Signing the agreement on Dominion status for a new Irish Free State, Collins remarked, "I have signed my own death warrant." Eight months later he was killed in the Irish Civil War: 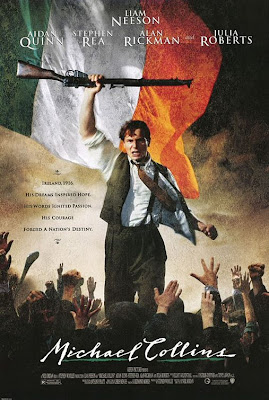 Michael Collins is the thinking man’s Die Hard – Dail Hard maybe, given the protagonists’ habit of convening every so often in their make-believe republican parliament. These brief interruptions aside, though, the film has as many explosions and killings and thrilling escapes as any Bruce Willis vehicle. It is not especially anti-English: indeed, the English may rather enjoy it, since, unlike most republican propagandists, Neil Jordan’s film doesn’t attempt to justify the violence by boring on about ancient injustices, real or imagined, or by dredging up Yeats’ “terrible beauty” and the usual high-falutin’ guff. It comes out shooting, goes out shooting, and in between is a blarney-free zone; its answer to the Irish Question is “Hasta la vista, muthaf**ker!”

On those rare occasions when the film stops firing and starts talking, it turns to specious rubbish. Returning from London in 1921, having secured the Free State Treaty, Collins tells his pals, “The position of the North will be reviewed, but at the moment remains part of the British Empire” – a sentence which never passed Collins’ lips, for the somewhat obvious reason that, under the Treaty, the Irish Free State itself remained part of the Empire; the North remained part of the United Kingdom.

If the film seems peppered with curiously lumpy, formal references to “the British Empire”, that’s because passing Irish nationalism off as a colonial struggle rather than a secessionist movement is a canny move in America: anti-imperialism is instantly sympathetic, whereas secession, under US law, is illegal. Collins’ contribution to Ireland, we’re told in the closing caption, was that he’d “overseen its transition to democracy”. But Ireland under the British was a democracy – though, then as now, the island was riven by one giant, fundamental difference of opinion. The British take a relaxed, indulgent view of these rhetorical flourishes – as no doubt they do of the law passed in New York State in the 1990s requiring the Irish Potato Famine to be taught in school as a deliberate act of British aggression and to be included in mandatory courses “devoted to the study of genocide, slavery and the Holocaust”.

But, captions aside and Imperial asides aside, the English can relax. In Jordan’s film, they’re virtually invisible – literally so: in their one big scene, an ill-advised concoction of the director’s, an armored car bursts on to a Gaelic football match and mows down the teams and the crowd. Anonymous, faceless tyranny, geddit? But the Irish are oddly invisible, too: Jordan makes little attempt to connect Collins and his small band of volunteers with any broad populist cause. Instead, the first half of this film is a brilliant rationale for terrorism – which is presumably why Sinn Fein and the IRA have been so appreciative of it. If you watch it dispassionately, you see a small band of amoral killers destabilizing the rule of law and intentionally provoking the state into careless atrocities upon its own people. Seen in this light, even the Black and Tans get a fair ride from Jordan. 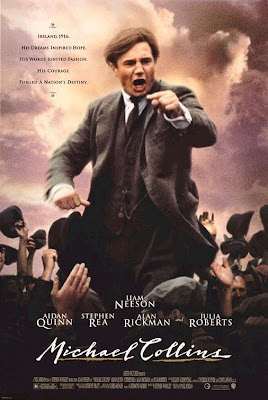 But, of course, we don’t watch it dispassionately. Liam Neeson is a big movie star and the film pressgangs even the most insignificant reaction shot into the service of his luster and loveability. He doesn’t look like Collins: I always enjoyed the historian George Dangerfield’s description of Michael’s “full cheeks and bee-stung lips”, but that’s not Neeson. So, in this film, the part of the cheeks and bee-stung lips is played by Julia Roberts as Kitty Kiernan, one-third of a lame Hollywood love triangle with Neeson and Aidan Quinn (as Harry Boland). In films like The Crying Game, Danny Boy and even Interview With The Vampire, Jordan has effortlessly conjured the sexual allure of violence, but here he can’t seem to find a way to connect up the romance and the terrorism – perhaps because, for this director, the real romance is the terrorism. His most desperate effort comes when he intercuts Bloody Sunday – the assassination of 19 government agents – with scenes of Collins and Kitty in their hotel room. By all accounts, the real Collins scattered his seed as liberally as his gunfire. But the almost chaste tenderness of this scene ennobles and dignifies the surrounding mayhem. And even the off-the-peg movie-romance banality of the relationship adds to the legend; the bottom line is this: you can be a cold-blooded, brutal thug, and still get your leg over Julia Roberts.

As to the central event in Collins’ life – his trip to London for the Treaty negotiations – the film skips it entirely: no Lloyd George, no Churchill, just Miss Roberts reading a letter about them. As a result, the second half of the movie was completely mystifying to the Americans I saw it with. In the idiot shorthand of motion pictures, all the guys in uniforms with guns had up to that point been Brits – and, therefore, the baddies. Suddenly, Collins himself is in a uniform – and he’s running around fighting other Irishmen. Five minutes earlier, he’d been a man of war; now, he’s a man of peace. The film shows nothing that could account for this transformation. But by this stage Jordan’s lack of interest in the traditional motivations and propulsions of drama is highly appropriate. Collins had returned from London with a form of independence that fell just short of a republic. As in Canada and Australia – and today in Belize and Papua New Guinea – it required only a nominal allegiance to the Crown. No sane man – even a film director – could give a plausible account of why the merest semantic detail should plunge a country into civil war. So Jordan doesn’t even try. Consequently, as a counterweight to the first half, the second half of Michael Collins is a brilliant if accidental representation of the sheer bloody pointlessness of Irish republicanism, even in 1922.

Collins was 31 when he died. He fits easily into the contours of movie heroics, though he is inevitably diminished by them. The more interesting biopic would have been of the ascetic, bespectacled de Valera (wonderfully played by Alan Rickman) – but that would have taken Jordan into modern, post-romantic Irish politics. Michael Collins is best enjoyed as an accumulation of images, particularly one ravishing, wistfully evocative scene on a half-empty dance floor in Kingstown. It seems only fitting that, when the hero dies in an ambush, we should see it from his young assassin’s point of view: having glamorized Collins, the film cannot resist glamorizing his unknown killer, too. That last image – the relish on that young face – foretells and distills the next 75 years.
Posted by jtf at 8:46 AM