Justices and politicians should boycott the State of the Union

By George F. Will
The Washington Post
Friday, March 12, 2010
http://www.washingtonpost.com/ 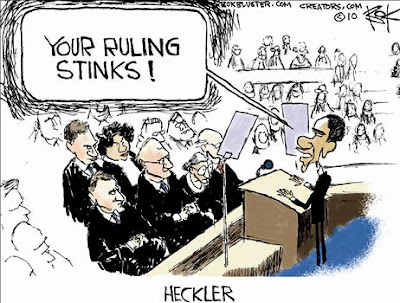 The increasingly puerile spectacle of presidential State of the Union addresses is indicative of the state of the union and is unnecessary: The Constitution requires only that the president "shall from time to time give to the Congress information of the state of the union." But a reaction may be brewing against these embarrassing events. Speaking in Alabama, Chief Justice John Roberts said "to the extent that" this occasion "has degenerated into a political pep rally," he is "not sure why we're there." He was referring to Supreme Court justices. But why is anyone there?

Roberts was responding to a question concerning the kerfuffle about Barack Obama's January address, wherein Obama criticized -- and flagrantly mischaracterized -- a recent Supreme Court decision that loosened limits on political speech. The decision neither overturned "a century of law" nor conferred an entitlement on foreign corporations to finance U.S. candidates. Nevertheless, the Democratic donkeys arrayed in front of Obama leapt onto their hind legs and brayed in unison, while the six justices who were present sat silently. Justice Samuel Alito, in an act of lèse majesté, appeared to mutter "not true" about Obama's untruths.

When Republican presidents deliver these addresses, Republican legislators, too, lurch up and down like puppets on strings. And Congress wonders why it is considered infantile.

Most of the blame for the State of the Union silliness, as for so much else, goes to The Root of Much Mischief, a.k.a. Woodrow Wilson. But a president whose middle name was Wilson made matters worse.

George Washington delivered his report on the state of the union in person, as did John Adams. But the third president, Thomas Jefferson, put his thoughts in writing and dispatched them to Congress. Such presidential reticence is impossible to imagine in the Age of Obama, but Jefferson disliked the sound of his voice and considered it monarchical for the executive to stand above the legislature and lecture it.

In 1913, however, Wilson, whose guiding principle was that the world could not hear too much from him, delivered his report in person. He thought the Founders had foolishly saddled the nation with a Constitution of checks and balances that made government sluggish or paralytic. Hence charismatic presidential leadership was needed to arouse public opinion that could compel Congress to bow to the president's will. The Founders thought statesmanship should restrain public opinion. Wilson's watery Caesarism preached that presidents should spur that dangerous stallion. He just knew he could control it. He learned otherwise when trying to ratify the Versailles Treaty.

George Washington considered Congress "the first wheel of the government, a wheel which communicates motion to all the rest." Wilson thought the presidency was the only office able to, or even entitled to, impart movement to the government.

Many conservatives were congressional supremacists until Ronald Wilson Reagan arrived possessing the rhetorical skills requisite for a Wilsonian presidency. His unfortunate filigree on the dramaturgy of State of the Union addresses was to begin the practice of stocking the House gallery with ordinary but exemplary people whose presence touches the public's erogenous zones.

The prolixity that is the defining characteristic of modern presidents blurs the distinction between campaigning and governing, and positions the presidency at the center of the nation's consciousness. This gives presidents delusions of omnipotence and makes Americans susceptible to perpetual disappointment and political dyspepsia.

We could take one small step toward restoring institutional equilibrium by thinking as Jefferson did about State of the Union addresses. Justice Antonin Scalia has stopped going to them because justices "sit there like bumps on a log" in the midst of the partisan posturing -- the political pep rally that Roberts described. Sis boom bah humbug.

Next year, Roberts and the rest of the justices should stay away from the president's address. So should the uniformed military, who are out of place in a setting of competitive political grandstanding. For that matter, the 535 legislators should boycott these undignified events. They would, if there were that many congressional grown-ups averse to being props in the childishness of popping up from their seats to cheer, or remaining sullenly seated in semi-pouts, as the politics of the moment dictates.

In the unlikely event that Obama or any other loquacious modern president has any thoughts about the State of the Union that he does not pour forth in the torrential course of his relentless rhetoric, he can mail those thoughts to Congress. The Postal Service needs the business.

georgewill@washpost.com
Posted by jtf at 8:19 AM