As a progressive, Obama hews to the Wilsonian tradition 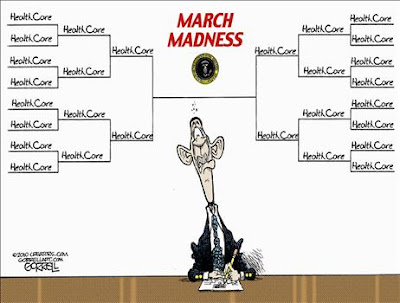 There are legislative miles to go before the government will be emancipated from its health-care myopia, but it is not too soon for a summing-up. Whether all or nothing of the legislation becomes law, Barack Obama has refuted critics who call him a radical. He has shown himself to be a timid progressive.

His timidity was displayed when he flinched from fighting for the boldness the nation needs -- a transition from the irrationality of employer-provided health insurance. His progressivism is an attitude of genteel regret about the persistence of politics.

Employer-paid insurance is central to what David Gratzer of the Manhattan Institute calls "the 12 cent problem." That is how much of every health-care dollar is spent by the person receiving the care. Hence Americans' buffet mentality: We paid at the door to the health-care feast, so let's consume all we can.

John McCain had the correct prescription for health care during the 2008 campaign. He proposed serious change -- taxing employer-provided health care as what it indisputably is, compensation, and giving tax credits, including refundable ones, for individuals to purchase insurance. Instead, as the legislative endgame plods toward us on leaden feet, the sprawling bills would subsidize insurance purchases for families of four earning almost $100,000 a year, a redundant reminder of unseriousness about the nation's fiscal mismanagement.

Of course, there now is a commission of experts to recommend cures for this. It should be called the Philip Dru Memorial Commission.

In a scintillating book coming in June ("The Icarus Syndrome: A History of American Hubris"), Peter Beinart dissects the progressivism of Woodrow Wilson. Edward House, Wilson's closest adviser, wrote an awful but indicative novel, "Philip Dru: Administrator." With the nation in crisis, Dru seizes power, declares himself "Administrator of the Republic" and replaces Congress with a commission of five experts who decree reforms that selfish interests had prevented.

Wilson, once a professor of political science, said that the Princeton he led as its president was dedicated to unbiased expertise, and he thought government could be "reduced to science." Progressives are forever longing to replace the governance of people by the administration of things. Because they are entirely public-spirited, progressives volunteer to be the administrators, and to be as disinterested as the dickens.

How gripped was Wilson by what Beinart calls "the hubris of reason"? Beinart writes:

"He even recommended to his wife that they draft a constitution for their marriage. Let's write down the basic rules, he suggested; 'then we can make bylaws at our leisure as they become necessary.' It was an early warning sign, a hint that perhaps the earnest young rationalizer did not understand that there were spheres where abstract principles didn't get you very far, where reason could never be king."

Professor Obama, who will seek reelection on the 100th anniversary of Wilson's 1912 election, understands, which makes him melancholy. Speaking to Katie Couric on Feb. 7, Obama said:

"I would have loved nothing better than to simply come up with some very elegant, academically approved approach to health care, and didn't have any kinds of legislative fingerprints on it, and just go ahead and have that passed. But that's not how it works in our democracy. Unfortunately, what we end up having to do is to do a lot of negotiations with a lot of different people."

Note his aesthetic criterion of elegance, by which he probably means sublime complexity. During the yearlong health-care debate, Republicans such as Sen. Lamar Alexander of Tennessee have consistently cautioned against the conceit that government is good at "comprehensive" solutions to the complex problems of a continental nation. Obama has consistently argued, in effect, that the health-care system is like a Calder mobile -- touch it here and things will jiggle here, there and everywhere. Because everything is connected to everything else, merely piecemeal change is impossible.

So note also Obama's yearning for something "academically approved" rather than something resulting from "a lot of negotiations with a lot of different people," a.k.a. politics. Here, too, Obama is in the spirit of the U.S. president who first was president of the American Political Science Association.

Wilson was the first president to criticize the Founding Fathers. He faulted them for designing a government too susceptible to factions that impede disinterested experts from getting on with government undistracted. Like Princeton's former president, Obama's grievance is with the greatest Princetonian, the "father of the Constitution," James Madison, Class of 1771.

georgewill@washpost.com
Posted by jtf at 6:08 PM