Warm-mongers prefer you in poverty

All that consumerism and higher living standards is bad for the planet. 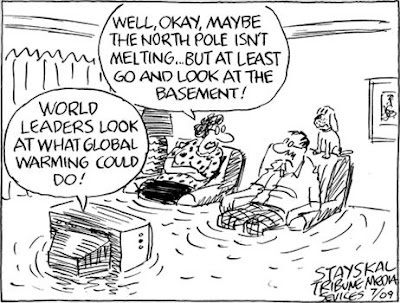 According to His Royal Highness the Prince of Wales, we only have 96 months left to save the planet.

I'm impressed. 96 months. Not 95. Not 97. July 2017. Put it in your diary. Usually the warm-mongers stick to the same old drone that we only have 10 years left to save the planet. Nice round number. Al Gore said we only have 10 years left three-and-a-half years ago, which makes him technically more of a pessimist than the Prince of Wales. Al's betting Armageddon kicks in January 2016 – unless he's just peddling glib generalities. And, alas, even a prophet of the ecopalypse as precise as His Royal Highness is sometimes prone to this airy-fairy 10-year shtick: In April, Prince Charles predicted that the red squirrel would be extinct "within 10 years," which suggests that, while it may be curtains for man and all his wretched works come summer of 2017, the poor doomed red squirrel will have the best part of two years to frolic and gambol on a ruined landscape.

So, unless you're a squirrel, don't start any long books in 95 months' time, because time is running out! "Time is running out to deal with climate change," said Steven Guilbeault of Greenpeace in 2006. "Ten years ago, we thought we had a lot of time."

Really? Ten years ago, we had a lot of time? Funny, that's not the way I remember it. ("Time is running out for the climate," said Chris Rose of Greenpeace in 1997.) So what's to blame for this eternally looming rendezvous with the iceberg of apocalypse? As the British newspaper The Independent reported;

"Capitalism and consumerism have brought the world to the brink of economic and environmental collapse, the Prince of Wales has warned. … And in a searing indictment on capitalist society, Charles said we can no longer afford consumerism and that the 'age of convenience' was over."

He then got in his limo and was driven to his other palace.

It takes a prince, heir to the thrones of Britain and Canada and Australia, Jamaica, Papua New Guinea and a bunch of other places, to tell it like it is: You pampered consumerists are ruining the joint. In the old days, we didn't have these kinds of problems. But then Mr. and Mrs. Peasant start remodeling the hovel, adding a rec room and indoor plumbing, replacing the emaciated old nag with a Honda Civic and driving to the mall in it, and next thing you know instead of just having an extra yard of mead every Boxing Day at the local tavern and adding a couple more pustules to the escutcheon with the local trollop they begin taking vacations in Florida. When it was just medieval dukes swanking about like that, the planet worked fine: That was "sustainable" consumerism. But now the masses want in. And, once you do that, there goes the global neighborhood.

By contrast, as an example of an exemplary environmentalist, the Prince hailed his forebear, King Henry VIII. True, he had a lot of wives, but he did dramatically reduce Anne Boleyn's carbon footprint.

I always enjoy it when the masks slip, and the warm-mongers explicitly demand we adopt a massive Poverty Expansion Program to save the planet. "I don't think a lot of electricity is a good thing," said Gar Smith of San Francisco's Earth Island Institute a few years back. "I have seen villages in Africa that had vibrant culture and great communities that were disrupted and destroyed by the introduction of electricity," he continued, regretting that African peasants "who used to spend their days and evenings in the streets playing music on their own instruments and sewing clothing for their neighbors on foot-pedal-powered sewing machines" are now slumped in front of "Desperate Housewives" reruns all day long.

One assumes Gar Smith is sincere in his fetishization of bucolic African poverty, with its vibrantly rampant disease and charmingly unspoilt life expectancy in the mid-forties. But when an hereditary prince starts attacking capitalism and pining for the days when a benign sovereign knew what was best for the masses he gives the real game away. Capitalism is liberating: You're born a peasant but you don't have to die one. You can work hard and get a nice place in the suburbs. If you were a 19th century Russian peasant, and you got to Ellis Island, you'd be living in a tenement on the Lower East Side, but your kids would get an education and move uptown, and your grandkids would be doctors and accountants in Westchester County. And your great-grandchild would be a Harvard-educated environmental activist demanding an end to all this electricity and indoor toilets.

Environmentalism opposes that kind of mobility. It seeks to return us to the age of kings when the masses are restrained by a privileged elite. Sometimes they will be hereditary monarchs, such as the Prince of Wales. Sometimes they will be merely the gilded princelings of the government apparatus – Barack Obama, Barney Frank, Nancy Pelosi. In the old days, they were endowed with absolute authority by God. Today, they're endowed by Mother Nature, empowered by Gaia to act on her behalf. But the object remains control – to constrain you in a million ways, most of which would never have occurred to Henry VIII, who, unlike the new cap-and-trade bill, was entirely indifferent as to whether your hovel was "energy efficient." The old rationale for absolute monarchy – Divine Right – is a tough sell in a democratic age. But the new rationale – Gaia's Right – has proved surprisingly plausible.

Beginning with FDR, wily statists justified the massive expansion of federal power under ever more elastic definitions of the Constitution's commerce clause. For Obama-era control freaks, the environment and health care are the commerce clause supersized. They establish the pretext for the regulation of everything: If the government is obligated to cure you of illness, it has an interest in preventing you getting ill in the first place – by regulating what you eat, how you live, the choices you make from the moment you get up in the morning. Likewise, if everything you do impacts "the environment," then the environment is an all-purpose umbrella for regulating everything you do. It's the most convenient and romantic justification for what the title of Paul Rahe's new book rightly identifies as "Soft Despotism."

The good news is that, at this week's G-8 summit, America's allies would commit only to the fuzziest and most meaningless of environmental goals. Europe has been hit far harder by the economic downturn. When your unemployment rate is 17 percent (as in Spain), "unsustainable growth" is no longer your most pressing problem. The environmental cult is itself a product of what the Prince calls the "Age of Convenience": it's what you worry about it when you don't have to worry about jobs or falling house prices or collapsed retirement accounts. Today, as European prime ministers are beginning to figure out, a strategic goal of making things worse when they're already worse is a much tougher sell.