Roger Federer refuses to blink in fight to finish

By Simon Barnes
The Times of London
http://www.timesonline.co.uk/tol/sport/
July 6, 2009

Salute, then, Roger Federer: the man who broke the unbreakable man. There are all kinds of ways of being a champion. The least sexy, and perhaps the hardest, is simply to stand your ground, simply to outlast the other bugger, simply not to fold and never to compromise. Federer didn’t get to win 15 grand-slam titles — more than anyone else has won — just by pretty shot-making. 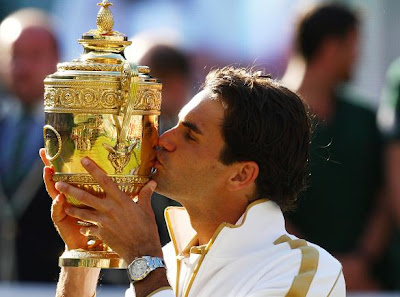 
Oh, one’s heart bleeds for Andy Roddick all right. He played 37 service games in this titanic match without being broken once. He would not be broken, no, not him. Not till the 38th game he served, and then Federer showed that he was that tiniest bit better when it came to outlasting.

The scoreline reads like an epic of suffering, and so it was, as Federer won 5-7, 7-6, 7-6, 3-6, 16-14. That final set became a blur: on and on they toiled, taking turns to slap aces at each other. The match was close, the games within it were not. In that final set, each man, as the four-hour mark ticked past, continued to serve with undiminished venom. Love games were common; deuces were rare; break-points almost non-existent. There were three in the first 29 games of that extraordinary set.

You kept saying, well, someone has to break. And break is a big word — in men’s tennis it is like breaking the man himself. To be broken is to surrender a little of your manhood. So this became an old-fashioned bout of male head-butting, and in this department, until the very last game of the match, Roddick had the edge.

He broke Federer in the first set and again in the fourth. And his own serve was a monstrous, inviolable thing. He hit 143mph at one point: more importantly, he crashed down a winner every time the Swiss sniffed a quarter-chance. Federer needed the tie-breakers to get past him. In a normal service game, he just didn’t have a chance. The fifth set looked like a long one from the very first point because Federer had no breaker to wait for. Roddick served like a champion, served like he meant to win. But always there was Federer at the other end, never matching Roddick for pace on the serve, but very seldom letting Roddick get close. As the final set rolled on, it was impossible to see a winner, perhaps ever. It looked as if they would still be swapping aces and love games for years to come.

But somebody always does break. You know it, both players know it.

And Federer simply wasn’t prepared for it to be him. And so, in the 30th game of the fifth set — how absurd it feels to write those words — Roddick made a series of small errors, errors that Federer had been waiting for, errors that Federer pounced on without a shred of compassion.

Federer has won Wimbledon before and done so with tennis of beauty and wonder. He has woven a spell, he has entranced, he has created such visions of loveliness that we got all fanciful and called it Art. On Sunday he won by the brilliantly simple tactic of Not Losing. In the second set, he saved four successive set points in the tie-breaker. Had Roddick been two sets to love up, who can say what would have happened.

And in the final set, Federer was mostly outplayed. Roddick was rallying with more aggression, more conviction. But no man would be broken, serve-serve, ace-ace, on and on as the skies grew dark and the sun began to sink.

The end was mercilessly swift. Federer had waited and waited, never buckling. He didn’t beat Roddick, he outlasted him. In the end it was the only ploy that was going to work against a man inspired, against a man who served thunderbolts in the manner of Zeus. Roddick served better, and for much of the match played better, but Federer has another very important weapon in his armoury. He is better at winning championships.

It was a back-to-basics sort of day, a serving duel on a grass court, an eyeballing, antler-crashing battle of the manhoods, an examination of the most basic requirement for winning a championship.

But Federer was better at actually getting it. Federer has won 15 grand-slam tournaments, he won the fifteenth because he is the best at winning.


Only the greatest could have won against Roddick

Minor royalty presented Roger Federer with the prize that marks his place in history, but Andy Roddick gave him the greatest gift of all. 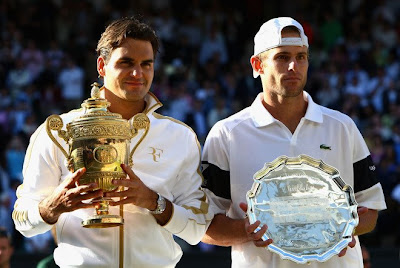 WIMBLEDON, ENGLAND - JULY 05: Roger Federer of Switzerland and Andy Roddick of USA pose for photographers after the men's singles final match against on Day Thirteen of the Wimbledon Lawn Tennis Championships at the All England Lawn Tennis and Croquet Club on July 5, 2009 in London, England. Federer won 5-7, 7-6, 7-6, 3-6, 16-14. (Photo by Clive Brunskill/Getty Images)

By forcing Federer to endure the longest final set in Grand Slam history, he provided the epic match that puts his achievements into perspective. With his 15th Grand Slam win, the record books state that Federer is now the finest tennis player ever, and if there remained resistance to that announcement it will have ended with a Wimbledon final that wasonly concluded in the 30th match of the fifth set.

Roddick’s bravery, his tenacity, athleticism and some stunning tennis from a player reborn ensured that nobody could be left in any doubt that Federer now stands
alone. The past greats, Pete Sampras, Bjorn Borg and Rod Laver, were there to bear witness, but nobody could have expected a match of such relentless, mercilessly high quality. Just as there has never been anyone like Federer, there has never been anything like this final.

At the end, before the Duke of Kent could give Federer the trophy, Roddick had to receive his consolation prize. As the guard of honour was forming and the dignitaries
were getting into position, a chant rose from the Centre Court crowd, soft at first, but growing in resonance and fervour until it was taken up by every man, woman and child in the stadium: ‘Roddick, Roddick, Roddick . . . ’

The loser stood and the roar that greeted this acknowledgement of his special part in the making of history was surely louder than has been heard for any beaten finalist, even the favourite sons of SW19. Indeed, when Federer was called forward there was barely a difference in decibel level. Never has the cliche about no man deserving to lose contained more truth.

Many of those who had arrived eager with anticipation of Federer’s 15th Slam were converted to Roddick’s cause by the end. Not just through the British love of the underdog, either; more because Roddick was up against a uniquely mighty opponent, yet had fought with such heart and had raised his game to such a level that he did not deserve to be crushed.

If there was a point at which both men could have shaken hands and agreed to saw the gold cup in half, it would have suited our native sense of fair play. But this is sport and its demands are black and white, a victor and a vanquished. At least nobody plays We Are The Champions, with its crass line about having no time for losers, at major tennis events.

How courageous was Roddick’s performance? Well, at the end of the second set he was as good as given the last rites, in sporting terms. Roddick had already won the first set against expectations 7-5 and was leading 6-2 in the tiebreak, serving for the set and a 2-0 lead. Federer picked up a beautiful crosscourt winner off his feet, then held his service points to take the score to 6-5.

It was at that moment that Roddick missed an easy volley at the net that would have given him the set. Now the score was tied; two points later so was the match, and the rapid demise of Roddick was widely predicted. As the third set was due to begin, he even walked to the wrong end, such was his mental turmoil, and Federer promptly
raced to a 40-0 lead in the first game. 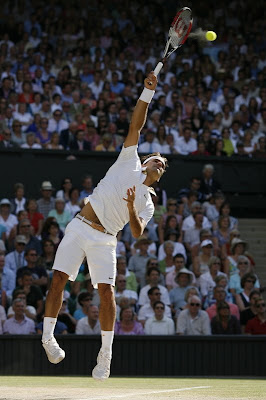 Centre Court appeared to be watching one of those sad disintegrations that occur in sport when a lesser player or team knows the chance of victory has passed. To Roddick’s credit, even as he dealt with immense frustration and disappointment, he never saw himself as the support act in another man’s show.

Sages predicted that a Federer win was a matter of time and, while they were right, what could not have been imagined was how much time, the game still in progress almost three hours later.

Far from being mentally diminished, Roddick rallied after another tiebreak defeat to win the fourth set and take Federer, and the final, into areas never considered.

The longest final set of any Grand Slam tournament was in 1927 when Rene Lacoste defeated William Tilden 11-9 in the French Open and then by the same margin in the US Championships (although tennis was very different in those days, the first set of the final against Tilden in the US also ended 9-7 and nobody got to sit down at changeovers).

Presumably, Lacoste was so exhausted after these exertions that he gave it all up to make T-shirts, and who can blame him?

Last year, when Rafael Nadal beat Federer 9-7 in the final here, many thought they had seen the greatest match in Wimbledon’s history, and when Nadal announced he could not defend his trophy through injury it was considered that the spark had gone from The Championships.

It would be too easy for Federer, was the consensus. Unless Andy Murray became inspired on home turf, they might as well begin engraving the trophy now.

Roddick made a mockery of that presumption, of so many presumptions in fact, firstly that it required his A game to beat Murray in the semi-final. As we now know, it was only his B-plus performance. Herewas Roddick’s peak this year, perhaps even in his career, and that Federer still found the wit and strength to defeat him over 30 games in the final set is what puts him apart as a champion.

‘How would you describe what you did here today?’ Roddick was asked. ‘I lost,’ he deadpanned. And, yes, he did, and nothing else matters to such a competitor. Yet, for once, the black and white cannot be allowed to tell the whole story.

Roger Federer is now beyond debate the greatest tennis player there has been and we know this because after four hours and 17 minutes and 77 games on July 5, 2009, he was fractionally better than Andy Roddick. And if he wasn’t the greatest player in the history of the sport he would not have been. It is as simple as that.
Posted by jtf at 1:04 PM