By George F. Will
The Washington Post
http://www.washingtonpost.com/
Wednesday, July 8, 2009

The death of Robert McNamara at 93 was less a faint reverberation of a receding era than a reminder that mentalities are the defining attributes of eras, and certain American mentalities recur with, it sometimes seems, metronomic regularity. McNamara came to Washington from a robust Detroit -- he headed Ford when America's swaggering automobile manufacturers enjoyed 90 percent market share -- to be President John Kennedy's secretary of defense. Seemingly confident that managing the competition of nations could be as orderly as managing competition among the three members of Detroit's oligopoly, McNamara entered government seven months before the birth of the current president, who is the owner and, he is serenely sure, fixer of General Motors. 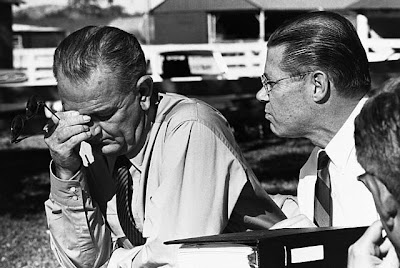 Today, something unsettlingly similar to McNamara's eerie assuredness pervades the Washington in which he died. The spirit is: Have confidence, everybody, because we have, or soon will have, everything -- really everything -- under control.

The apogee of McNamara's professional life, in the first half of the 1960s, coincided, not coincidentally, with the apogee of the belief that behavioralism had finally made possible a science of politics.
Behavioralism held -- holds; it is a hardy perennial -- that the social and natural sciences are not so different, both being devoted to the discovery of law-like regularities that govern the behavior of atoms, hamsters, humans, whatever.

Two of behavioralism's reinforcing assumptions were: Things that can be quantified can be controlled. And everything can be quantified. So, pick a problem, any problem. Military insurgency in Indochina? The answer is counterinsurgency. What can be, and hence must be, quantified? Body counts, surely. Bingo: a metric of success.

Not exactly. The behavior of the North Vietnamese and Viet Cong did not respond as expected to America's finely calibrated stimuli, such as bombing this but not that, and bombing pauses. Behavioralists were disappointed but not discouraged. They would give nation-building another try.

It was in reaction to the mentality that McNamara represented that the Public Interest quarterly was born. Its founders were intellectuals, many of whom were called "neoconservatives" when that designation was more relevant to domestic than foreign policy. The journal's mission was to insist that (as Daniel Patrick Moynihan, then a Harvard social scientist, said) the function of social science is not to tell us what to do but to tell us what does not work. What did not work in the 1960s, at home and abroad, was quite a lot.

McNamara died on a day when there was interesting news from Asia, the region of his torments: There was lethal ethnic rioting in China. That development refutes, redundantly, the prophecy of a 19th-century social scientist, Karl Marx. Believing that he had discerned the laws of social physics, he said that the coming of modernity -- the rise of science and the retreat of religion under the rationality of market societies -- would mean that pre-industrial factors such as religion and ethnicity would lose their history-shaping saliency.

So far, the 21st century is vexed by nothing so much as those supposed residues of humanity's infancy. Nevertheless, Marx's anticipation morphed into what Moynihan called "the liberal expectancy." It is the hope -- liberals tend to treat hopes as probabilities -- that the fading of those atavisms and superstitions has put the world on a path to perpetual tranquility. 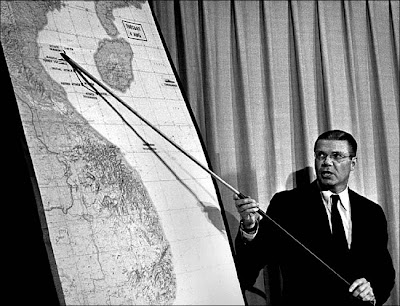 Former Defense Secretary Robert McNamara is shown at a press conference pointing to the Gulf of Tonkin on a map of Vietnam in August of 1964.

The world McNamara has departed could soon be convulsed by attempts to modify Iran's behavior. Since a variety of incentives have been unavailing, more muscular measures -- perhaps "surgical strikes," a phrase redolent of the McNamara mentality -- are contemplated.

Some persons fault the president for not having more ambitious plans to prompt and guide Iranians toward regime change. That outcome is sometimes advocated, and its consequences confidently anticipated, by neoconservatives whose certitude about feasibility resembles that which, decades ago, neoconservatism was born to counter.

Well. Every four years we saturate New Hampshire -- that small, English-speaking, culturally homogenous, ethnically temperate sliver of tranquil New England -- with politicians, consultants, journalists and political scientists. And often we are surprised -- even dumbfounded -- by how unpredictably that state's people, with their native perversity, choose to behave in their presidential primary.

McNamara, like many who leave high office, never left the capital of this nation that believes people learn from history, and that therefore history is linear and progressive. But the capital, gripped once again by the audacious hope of mastering everything, would be wise to entertain a shadow of a doubt about that.

Related
The McNamara I Knew
Brightness Cloaked In Hubris
Posted by jtf at 5:22 AM