PRESIDENT Obama went to Moscow desperate for the appearance of a foreign-policy success. He got that illusion -- at a substantial cost to America's security.

The series of signing ceremonies in a grand Kremlin hall and the litany of agreements, accords and frameworks implied that the United States benefited from all the fuss. We didn't. 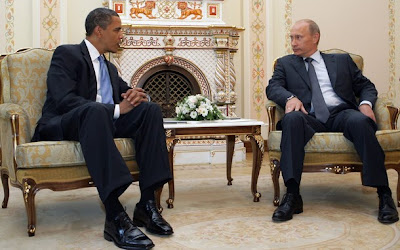 US President Barack Obama (L) speaks with Russian Prime Minister Vladimir Putin outside Moscow in Novo-Ogarevo on July 7, 2009. Putin said Russia was pinning its hopes on Obama to revive ties with the United States as the two leaders met for the first time.

We got nothing of real importance. But the government of puppet-master Vladimir Putin (nominally just prime minister) got virtually all it wanted. In Moscow, this was Christmas in July.

Ignore the agenda-padding public-health memorandum and the meaningless "framework document on military cooperation" (we've had such agreements before; the Russians always just stiff us). The main course in Moscow was arms control.

President Obama's ideological bias against nuclear weapons dates back to his undergraduate years. Yet those weapons kept the peace between the world's great powers for 64 years. A few remarks about deterrence notwithstanding, Obama just doesn't get it.

He agreed to trim our nuclear-warhead arsenal by one-third and -- even more dangerously -- to cut the systems that deliver the nuclear payloads. In fact, the Russians don't care much about our warhead numbers (which will be chopped to a figure "between 1,500 and 1,675"). What they really wanted -- and got -- was a US cave-in regarding limits on our nuclear-capable bombers, submarines and missiles that could leave us with as few as 500 such systems, if the Russians continue to get their way as the final details are negotiated.

Moscow knows we aren't going to start a nuclear war with Russia. Putin (forget poor "President" Dmitry Medvedev) wants to gut our conventional capabilities to stage globe-spanning military operations. He wants to cut us down to Russia's size.

Our problem is that many nuclear-delivery systems -- such as bombers or subs -- are "dual-use": A B-2 bomber can launch nukes, but it's employed more frequently to deliver conventional ordnance.

Putin sought to cripple our ability to respond to international crises. Obama, meanwhile, was out for "deliverables" -- deals that could be signed in front of the cameras. Each man got what he wanted.

We just agreed to the disarmament position of the American Communist Party of the 1950s.

The Russians also enjoyed our president's empathy for their position on missile defense. Apparently, Eastern Europe really does belong to the Kremlin's sphere of influence.

Not least, Obama fell for the sucker offer of the year: The Russians will generously allow us to fly our troops and weapons through their airspace to Afghanistan.

This ploy is utterly transparent: Putin intends to lull us into dependency on a trans-Russia supply route -- giving him a free hand in Georgia, Ukraine and elsewhere.

By Putin's calculus, we'll complain about further aggression on Russia's frontiers, but take no action that would jeopardize our new supply line. Meanwhile, we serve as the Kremlin's proxies, protecting its sphere of influence in Central Asia against Islamist influence from the south and working on the Russians' Afghan heroin problem.

What did our president get in return? Russia will import more American meat products (which Russia needs). And we can re-open our Moscow office investigating the cases of POWs and MIAs from yesteryear's wars. Well, I served in that office 16 years ago. Even during the Yeltsin-era "thaw," the Russians stonewalled us. And Putin's no Boris Yeltsin.

Our president also got some generalizations about North Korea and Iran, but no hard commitments. Russia -- which designed many of Iran's nuclear facilities -- wouldn't even promise to permanently deny Iran the sophisticated air-defense systems that would make it harder to hit Tehran's nuke sites.

And you could read something else in President Medvedev's imperious bearing behind his podium yesterday: Moscow longs for the world to view Russia and the United States as equals again, as joint arbiters of a global condominium, reviving the Kremlin's Cold-War status (for which Russians feel passionate nostalgia).

There's been a debate in the Obama administration between veterans who learned the hard way not to trust the Russians and the new, unblooded idealists. Now we know who won.

Great news for the Russian Federation. Bad news for America. Until an adoring media spins it, of course.
Posted by jtf at 6:01 AM

How much effort a person has to make to write a beautiful post and I can understand this because I also write a post, your pose is very good and you get to learn a lot from this post.
gurugram call girls booking
Apologizing to friends

I like these topics very much. I would like to see such topics daily, this post is very good indeed. There are people like you in the world who put forth their views. Thank you so much for posting such a great post.sector 15 escorts
Apologizing to friends
success is very difficult
Massage service