Reflections on a mixed political legacy.

Today marks the 500th anniversary of the birth of John Calvin, the French theologian who helped carry the Protestant Reformation into the heart of Europe and shatter the spiritual hegemony of the Catholic Church. Though Calvin was never the theocratic thug of popular imagination, neither was he a champion of individual freedom. If his system of thought inspired later democratic reformers--especially the Puritan ministers who backed the American Revolution--it was largely because they sought to overcome Calvinism's internal contradictions. 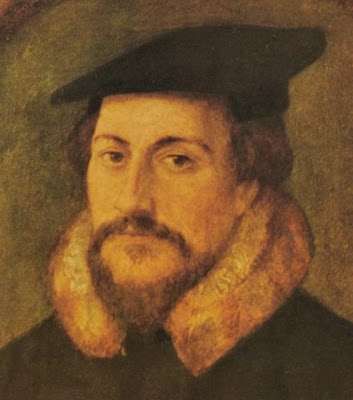 Calvin was born on July 10, 1509, into a religious world already in crisis--a cacophony of superstitions, inquisitions, clerical concubines, and souls for sale. After coming under the influence of Martin Luther, he converted to Protestantism. A severe crackdown on the "new heresy" in Catholic France forced him to seek refuge in Switzerland, where he settled in Geneva. Over the next 25 years Calvin would combine his powerful intellect and elegant prose to become the Reformation's leading theologian.

His most important work, The Institutes of the Christian Religion, helped revolutionize the meaning of divine mercy. Against a religious culture of rituals, indulgences, and pilgrimages to earn God's favor, Calvin preached a message of grace. Salvation, he taught, could neither be bought nor earned: It was a gift from God through faith in Jesus. "We could not lay hold of his mercy, if he did not offer it," he wrote. "Christ is the only pledge of love, for without him, everything speaks of hatred and anger." Calvin's doctrine of predestination, however, went beyond Luther in delineating God's "elect," those chosen for eternal life, from those destined for eternal damnation. Many would find the doctrine repugnant, since it seemed to make God the author of evil and nullify human choice in matters of faith.

Against a political system that threatened to subjugate and enfeeble the church, Calvin elevated the concept of God's sovereign rule over every earthly power. Although he taught obedience to civil magistrates, every ruler was accountable to God. All political authority was therefore provisional, derivative--and limited. The king should defend and promote Christian teachings, Calvin wrote, but keep his nose out of the spiritual affairs of the church. If the magistrate commanded anything contrary to the will of God, "it must be as nothing to us."

Unlike previous reformers, Calvin did not expect the rapid arrival of the Second Coming of Christ. His aim was to establish a holy commonwealth, a "new Israel," where God's elect--functioning as a democratic polity--would glorify him through their earthly vocations. No Protestant reformer did more to help dignify secular work and inspire Christian engagement in culture. Calvinism would spread to Holland, France, England, Scotland, and New England, where it would shape America's colonial experiments in self-government. "Calvin came out with a resolute summons to action within the sphere of society," writes historian Roland Bainton. "Calvinism therefore bred a race of heroes."

Something less than heroic, however, emerged in Calvin's Geneva. His view of the church, guiding God's people with "motherly care," took a repressive turn once his Reformed vision gained political power in the city council. Although he vigorously attacked Catholicism for its theology of persecution, he soon formulated his own: Faith could not be compelled, but neither could civil or religious authorities tolerate false teachings. Dissent--viewed as both a political and spiritual threat--was criminalized. A denial of predestination meant banishment. "When God is blasphemed in a most loathsome manner, when souls are led to perdition by godless and destructive teachings, then it is necessary to find the remedy which will prevent the deadly poison from spreading."

When it came to the poison of heresy, the safest remedy was execution. Calvin's infamous role in the trial and death of Michael Servetus, condemned and burned as a heretic in Geneva in 1553, shocked the conscience of the Protestant community. Many accused the Protestant leaders in Geneva of adopting the "popish" ways of the Catholic Church. Sebastian Castellio, a linguist and colleague, broke with Calvin over the principle of religious toleration: "I do not see how we can retain the name of Christian," Castellio said, "if we do not imitate His clemency and mercy." 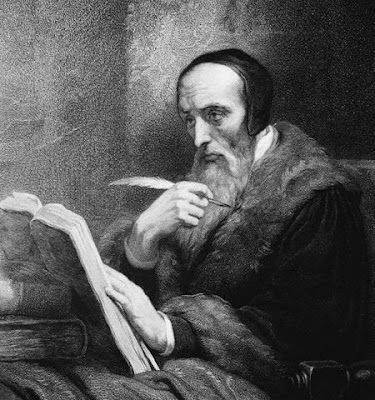 Calvin did not yield an inch. Invoking Old Testament passages condemning the worship of false gods, he defended the use of violence against those who challenged orthodoxy and threatened the purity of the elect. Detractors were presumed to be insincere, morally debased--or worse. Despite their dark view of human nature, Calvin and his followers seemed to invite a new form of hubris into the church. "They did not usually act as if they believed what their own theology said about the huge gap between divine omniscience and human finitude," writes Notre Dame historian Mark Noll, "nor did they seem to really believe their own claim that even believers continued to abuse the gifts of God for idolatrous, selfish ends."

Thus, John Calvin and the Reformed tradition he launched were simultaneously medieval and modern. Much like his Catholic antagonists, Calvin viewed the political and religious realms as part of an unbroken spiritual unity. For all his theological innovation, he never imagined that the church could maintain its fidelity to the truth without the assistance of the state.

Nevertheless, Calvin anticipated the modern, liberal world by demanding that church authority yield to individual judgment when its traditions seemed to contradict conscience and the word of God. He insisted on the functional independence of the church from the state. He emphasized the spiritual freedom and equality of all believers, regardless of their station in life. In this way, Calvin helped sanctify a doctrine of liberty that democratic reformers--from John Locke to James Madison--would put to good use.

Joseph Loconte is a senior research fellow at The King's College in New York City and a frequent contributor to THE WEEKLY STANDARD. He is working on a book on the history of religious freedom in the West.
Posted by jtf at 10:45 PM