Shoot-outs, and a script full of holes

How could “Public Enemies" go wrong? The director is Michael Mann, one of the smartest mainstream mavericks working. Star Johnny Depp brings his sizable intelligence and charisma to bear on the role of John Dillinger, the legendary Depression-era bank robber. Christian Bale plays Dillinger’s implacable FBI hellhound, Melvin Purvis. The shoot-outs have been shot with a fastidiousness that extends to using actual historical locations. The lead actress won an Oscar for playing Edith Piaf. 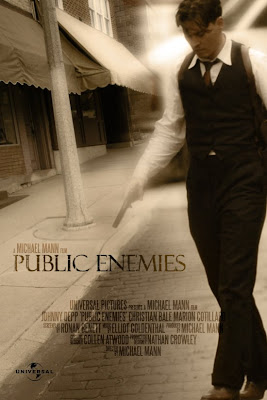 The parts, in other words, promise a brilliant whole. So why is this movie one of the signal disappointments of the year? You have to go back to the basics: “Public Enemies’’ has everything going for it except a reason and a script. Do you really need either when Depp is up there giving a working definition of star power? Surprisingly, yes.

Adapting Bryan Burrough’s 2004 popular history of the same name, Mann and co-screenwriters Ronan Bennett and Ann Biderman jettison context and drop us in the middle of things: It’s 1934 and Dillinger is breaking a group of confederates, including mentor Walter Dietrich (James Russo), out of the state prison in Michigan City, Ind.

Actually, I’m guessing Dietrich is his mentor, since the movie never makes clear who he is. It isn’t very clear about anything, other than that John Dillinger was an exceptionally cool dude who robbed banks for a living. “Public Enemies" presents him as living wholly in the moment - he’s a successful Zen sociopath - and takes a similar present-tense approach to its storytelling. We don’t learn anything about Dillinger’s background or the reasons for his behavior. He is who he is, and who he is is a mystery.

OK. Other movies have been made from this existential-bad- ass cloth, and better ones. “Public Enemies" works fitfully on a scene-by-scene basis, but there’s nothing to fit the pieces together, and after a while you realize the movie’s not about anything. No larger idea enlivens its 143 minutes, other than that Dillinger was a folk hero and FBI head J. Edgar Hoover (Billy Crudup) was a fame whore. Mann just follows the chronology and sends us home.

For the second movie in a season, Christian Bale locks so furiously into a part that you gasp for oxygen whenever he’s onscreen. His G-man, Purvis, has no family, no past, no nothing other than his mission to scour America of its barnstorming gangsters. “Public Enemies" underscores his decency - he’s a better man than his boss Hoover or the FBI underling (Adam Mucci) who roughs up a female suspect - while showing him to be an unstoppable instrument of justice. He’s Dick Tracy, no less but, unfortunately, no more.

Mann gets a few interesting scenes out of the FBI’s early interest in technology, with tapped phone conversations recorded on vinyl LPs, but the movie’s much too slick for any political reading to take hold. “Public Enemies" mostly comes to life during the bank robberies, with Dillinger leaping effortlessly across the counters, and in the scenes with Marion Cotillard as Billie Frechette, the gunman’s lover. 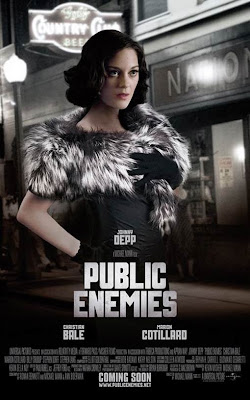 But there are people to shoot and historical facts to mangle. I don’t mind that Pretty Boy Floyd is introduced and shot dead within the space of 10 seconds, but what a waste of Channing Tatum, one of our most interesting young actor-hunks. (We don’t even see his face clearly.) Gangster movies have always rearranged the particulars to suit whatever romantic Robin Hood notion they’re peddling, and “Public Enemies" is no different.

That said, letting Baby Face Nelson (Stephen Graham) go down in a hail of bullets during the shoot-out at the Little Bohemia Lodge is a flat-out untruth (Nelson was shot and killed in November 1934, four months after Dillinger’s death and six months after Little Bohemia.) The battle between the “second Dillinger gang" and the FBI is Mann’s big action set piece - this movie’s version of the bank shoot-out in “Heat" - and it’s tense and excitingly filmed. Yet the director’s decision to shoot on high-definition video has become a liability by this point, with lights in the night-time sequences overmodulating and bleeding onto the film like cheap camcorder shots.

Why would Mann and the gifted cinematographer Dante Spinotti do this - intentionally sabotage the look of their film? Are they trying to make the Dillinger story topical by filming it as if it were “Cops" or “America’s Most Wanted" (or a bar mitzvah video)? If so, the experiment falls on its face, and “Public Enemies" gets stranded between an undersketched past and an irrelevant present.

What remains undiminished is Johnny Depp’s almost unholy screen magnetism. The actor looks surprisingly like Dillinger - a movie-star version, anyway - and the trim moustache and blocky bad-boy haircut become him. He gives the criminal shades of confidence and quiet daring and, behind it all, an unsolved melancholy that’s the movie’s one fresh note. In a lovely scene late in the game, Dillinger walks unnoticed through Purvis’s local FBI headquarters, marveling silently at the piles of evidence that have failed to capture him.

In another, the hero spends his final evening in a movie theater watching the MGM gangster film “Manhattan Melodrama," and Mann cuts back and forth between Clark Gable onscreen, Dillinger in the audience, and the gathering agents outside. The scene shows a public enemy communing with his Hollywood twin, but it’s really about one generation’s king tipping his hat to another’s. The hat fits, even if the movie around him doesn’t.

Ty Burr can be reached at tburr@globe.com. For more on movies, go to www.boston.com/movienation.
Posted by jtf at 6:33 AM