[Craig was my roomate in college when we attended Liberty University in the early '80s and he remains a dear friend. His story is more than compelling. - jtf]

FRANKLIN — Not that long ago, Craig Daliessio had a nice life as a mortgage banker, helping other people obtain their dream homes while earning commissions that financed his dream home, too.

But being a mortgage banker did not insulate him from the effects of the recession, tightening credit and the housing slump. 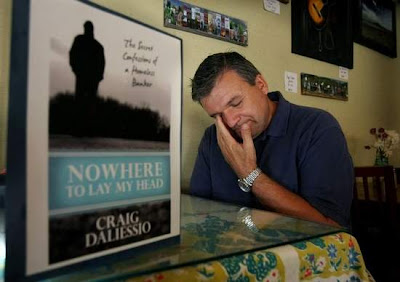 Craig Daliessio becomes emotional while talking about how he lost everything including his home. He was homeless and lived in his car. He has written a self-published book called Nowhere To Lay My Head.


In fact, quite the opposite: The downturn in the economy and the accompanying mortgage crisis cost him his livelihood and, eventually, his Thompson's Station home, too.

In the space of only 18 months, he lost pretty much everything he owned. For four months late last year, he lived in his car.

"It was a kick to the heart and it hurt for a long time," Daliessio relates in a memoir he has written about his experiences, Nowhere to Lay My Head: The Secret Confessions of a Homeless Banker.

At the height of his career with the Franklin branch of Allied Mortgage Co., Daliessio was earning $91,000, but his income from commissions began dropping in 2006.

"One by one, loans I thought were sure to close fell out of underwriting for one reason or another," he said. "People with astounding credit were turned down because of the general fear in the industry."

By August of 2007 his business volume had dropped by 70 percent. By March 2008, he was out of work and looking for any job that paid.

But he said even minimum-wage jobs were hard to find.

"From what I understand, Dominos hasn't hired a new driver in six months," he said.

He did eventually find some temporary laborer jobs. He worked for a landscaper, he pressure-washed driveways, he aerated lawns, built someone a chicken coop and built someone else a deck.

Unable to make payments on a rental home — he had sold his house and mini-farm in early 2007 — he was given shelter for a while by friends who owned a spare apartment.

But by the end of August, those friends had to move him out because they had committed the space to someone else.

"I sofa surfed for a while," Daliessio said. "Then I ran out of options and started sleeping in my car."

Complicating his dire situation even more, his ex-wife filed a complaint against him for failing to make child support payments on time, and the judge ordered Daliessio to spend his weekends in the Davidson County jail.

Daliessio said that not being available to work on weekends cost him a job opportunity with a duct-cleaning company and two other employers.

But getting his child support obligation reduced by the court, he said, "is an eight-month long process if you don't have a lawyer."

Still, he said he sometimes slept better at the jail than in his car.

"Living in the car is hard," he said. "It is almost work. It is difficult to sleep; it's either cold or it's hot."

He said he learned quickly that he needed to hide the car and himself at night or local police would rouse him for loitering and make him move on.

He found a place near a church parking lot with some tall grass that proved to be a good hiding place.

But he said he couldn't roll his windows down because of the mosquitoes, and the parking lot lamps kept an incessant light shining into the car all night long.

"When you are sleeping on the streets . . . whether in your car or a doorway or under a bridge, you don't really sleep at all," he said. "You nap.

"Sirens wail, the wind blows, dogs bark, someone is coming and you hear their footsteps.

"I have yet to sleep more than about two hours at a time," he wrote.

Being broke and homeless was particularly excruciating in a community that is as prosperous as Williamson County, he said.

"In Davidson County, if you are homeless, you're an outreach project. In Williamson County, you're a pain in the butt," he said. "That's a little how it felt.

In his book, Daliessio, now 45, writes that his acquaintances here "did not know the desperation I was feeling," adding, "They did not care that they did not know either, they just blurted out their John Wayne-esque spiritual machismo and decided I was lazy."

Today Daliessio, in addition to giving motivational speeches, is again writing some loans for Allied. And he has a home in a Franklin subdivision.


REFLECTIONS ON THE MEANING OF HOME

Craig Daliessio’s memoir about becoming homeless includes this poignant meditation on the meaning of home:

“What makes a home a home?
For me, it was a lot of simple things. The promise that love and acceptance always awaited you on the other side of that door when you pulled up at night.

The feeling that no matter what the day had brought, no matter whether you won or lost your battles against the dragons you warred with, you were loved and eagerly expected each evening.
There were people here with the same dreams, the same goals, the same loves and joys and hopes as you.

You would rally behind each other no matter what. This place was safe and secure and it was your home base.

There were pictures on the walls and music in each voice. The kitchen smelled of everyone’s favorite recipe and the beds were warm and inviting each night.

Your best friends were here and you could not wait to see them each night after the workday ended.

Craig Daliessio’s book, as well as another book he wrote about being a divorced dad, are available through http://stores.lulu.com/craigdsbooks.
Posted by jtf at 6:55 AM

Thanks for posting that for me Jim. That picture was tough...she had just asked me what the hardest thing was and I was relating how I had to lie to my daughter for the only time in her life about where I was living. Nancy was gracious and did a wonderful Job. Thank you for always being there too, dearest friend.